When Do You Tell Your Child He's Different? 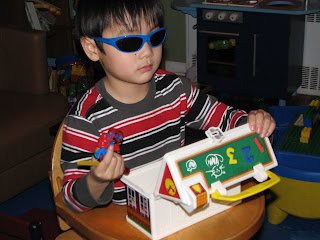 Is there ever a right time? Today was a fairly good day. The boys got a few presents that they liked and Logan was looking forward to playing with one right before bedtime. Unfortunately, just minutes before bedtime, Logan and Spencer were playing near the trampoline and then Logan locked his brother in a sliding door closet and I couldn't get it open. Spencer was crying and I was worried he would get hurt. My husband helped me get him out. After seeing that Spencer was okay, I sent Logan straight to bed and told him that there will be no playing with his new toy, no pre-bedtime playtime with dad or mom and no stories. (Once again, thanks to Klonopin, I did this without yelling) He was devastated and he kept saying how he had a bad day and he begged for another chance and also said ...... and this broke my heart, "I can't control my body."

I guess sooner or later, I'll have to tell Logan why he sometimes can't control his body. He's such a good kid and I know he really loves and cares for his brother but he really just can't help himself at times. I hated having to "punish" him but I'm not sure if there is a better way to let him know that this was unacceptable and dangerous behavior. However, I did tell him a million times that I wasn't mad anymore and that I loved him and that I know he'll try better tomorrow. I hope that was the right thing to do.
Posted by Jenn at 12:37 AM

It is so hard to punish them..I have problems too. However, my pediatrician said that they have to have firm boundaries and that we have to be consistent. It's hard because I want to make excuses for him but I realize that I can't be there all the time and he will get punished at school too. I always tell him I love him and we talk about what the better choice would have been. Sometimes it seems I get through. Hugs to you!