A Greedy Mom Changes Her Ways

Many years ago, my mother paid a "very reputable" fortune teller to tell us about my future. He told me that I would marry "internationally" which in Korean means you won't marry a Korean person. He also told me that I had a lot of yokshim which in English means "greed." 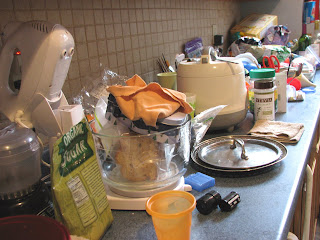 I'm not big on fortune tellers but I think this man might have been right about me. First, I didn't marry a Korean man. I married a Chinese American man although it can be argued that we are both American and therefore it was not an "international" marriage but more importantly.....and I'm sorry to admit this but I think I am really greedy.

Why do I say this today? Because I finally admitted to myself that I had lost my library book, The Secret, by Rhonda Byrne. Believe it or not, I own The Secret on DVD at home but I just like the book version better so I took it out of the library along with other books that I don't even read.

Maybe because I'm broke, I have found a way to be greedy by taking out books for free. I think I've always been this way, buying things that I don't really need but think I need or "should have." For example, I have unopened boxes of quinoa and rice cakes for Chinese sizzling soup that I wanted to make for the boys but never did. At the same time, I will take months or years to buy myself new socks and jeans, telling myself I need to save money. I think I am not only greedy, I am stupid too.

The book costs $14 dollars on Amazon but the library rules say I must pay $32 dollars. I can see my husband cringe as I write this. Hopefully, he'll miss this post. He was so nice today. After he put Logan to bed, he stopped me while I was doing the dishes and offered to finish up. I felt really bad because of the book (I didn't tell him) but I did let him finish up because I hadn't showered in two days.

I decided to take this moment of shame as a lesson. I am not only going to take out less library books, I am going to stop buying GFCF products that I won't use. I am also going to clean up and organize more and stop bitching about the fact that I'm always cooking and picking up stuff off the floor and therefore have no time to organize. One day, I'll just organize instead of cooking dinner or washing dishes or whatever. I had already learned a little bit about this through Oprah but I didn't finish the job. This time, I'm really going to work hard on being less greedy and more organized. Perhaps I may even find that book before it's due!

(Top picture: See how much counter space I have? It's pathetic.)
Posted by Jenn at 2:54 PM

Thank you to sharing very important information to us