I Will Not Define Myself By My Fears: A Bread Recipe 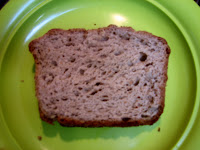 A month after we first went GFCF, Logan started demanding bread. I happened to have the Food for Life brand in the house but never gave it to him because I thought it didn't taste good and so it would depress him more. But he kept demanding it so I gave him a slice and he gobbled it up really fast. I was so relieved.

Absence makes the heart grow fonder. Especially for an ADHDer who gets sick of everything, so of course, he became sick of the Food for Life brand. His diet restricted him from soy, corn, eggs, and milk too so all the other store-bought brands were off-limits.

It was time to make my own bread. I was REALLY scared to do it. Do you ever define yourself by your fears? One of the ways I defined myself was by saying, I can't bake. I also say that I never drive in the city. You may know what I mean if you've ever driven in Manhattan. But seriously, what a bad habit. You really start to believe you are unable to do it.

One day, I found a recipe on gfutah.org for white sandwich bread and just decided to swallow those fears and give my sons some freshly baked bread. After a couple of hours, it was done. I had put in too much milk and let it rise too much and out came this humongous balloon. I also touched it right after it came out of the oven because I thought I needed one more side to be oiled. That was a dumb move because the side I touched caved in. It ended up being really deformed.

I still gave it to my kids. For Spencer who still liked soft foods, I heated it up in hemp milk and added a little agave nectar and salt to turn it into some kind of bread pudding. He loved it. For Logan, he loved it with just a bit of salt or with jelly. Now I have one less fear by which to define myself. I only have 386 more to go. Anyway, this bread recipe is no longer on that site (I think) and a couple of people have asked me for it so here it is. 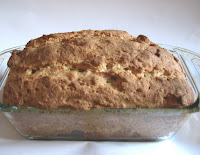 My note: I substitute the white rice flour with brown rice flour (loaf pictured above), millet flour, and sorghum flour. I think the latter two have a little bit more protein and it's also nice to give different flavors. (Pictured at top is a slice of sorghum bread. My kids go through 5 loaves a month.)

Thank you again for your flawless service, and I look forward to working with you in the future.