Paying Your Child to Behave 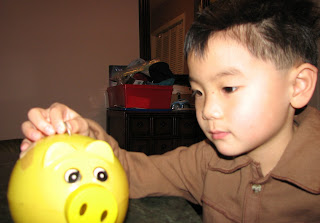 How wrong is this? I don't know but I had to try it even if my husband disagreed.

My social worker said it wasn't a bad idea and I had been waiting to talk to my husband about it before implementing it. I don't know about you but after the kids go to sleep, my husband and I go into another zone. We finally feel like we have time to ourselves (not as a couple), and we don't talk to each other except to say, "Do you mind if I watch Grey's Anatomy?" Actually, I say that. He barely talks to me except to say how the economy is unbelievably miserable. He knows I'm clueless about that stuff.
Anyway, I finally did ask my husband about it and he was against the idea. I don't remember his reason but I understand why anyone would be against it. My husband grew up very poor in a two room apartment in Chinatown with three other siblings. Giving money for good behavior is like super-spoiling a child in many family philosophies. I used to think the same way.
I have to give Logan his B12 shots three times a week. Giving them while he's asleep is not an option. He wakes up and fights so I figured it would be better and safer if he fights while he's awake. However, he would just have a hysterical fit before the shot so finally I just got the piggy bank that we never use, took out a stack of quarters and said, "Logan, you can have two quarters if you stay still for the shot but only if you stay still. Then we can take your quarters to Target and buy a toy."
Hysteria gone. Shot administered in 5 seconds.
I started to talk to him about how many quarters he should get for each deed. It was apparent that he knew which areas he had trouble with when he suggested that he get quarters for changing into his clothes in the morning. He also floored me when he said, "Mommy, can I get two quarters if I don't come to the door at bedtime?" At night, Logan's bedroom door looks like a malfunctioning cuckoo clock. He doesn't know how to fall asleep sometimes. Uncle John is buying him a weighted blanket for his birthday. 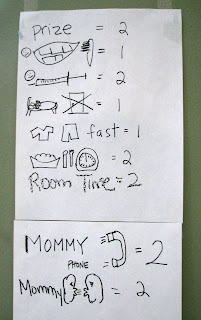 We then invited Daddy to come and help us determine how many quarters Logan should get for each deed and wrote it down on a chart. I know it was an ambush but those shots were killing me and I had to do something. Sorry Honey, if you are reading this, I promise I will try really hard never to ambush you again but sometimes, a mom's gotta do what a mom's gotta do.
Six weeks later, we are still doing the quarters and while it has not been magical, it has definitely helped. The more consistent we are about it, the better it works. All I can tell you is that toothbrushing and giving shots are so much easier now and he's better at not coming to the door at night. He also responds to me taking away quarters for bad behavior. He was really mad when I did it and I was so happy that he cared. We had tried the token system after reading this great book, Your Defiant Child, but he never cared to lose tokens.
(Pictured: Our "quarters chart" which is mostly written in pictures. The word "prize" means that he gets a prize in school for good behavior. This is our way of carrying over good school behavior into the home. The others should look self-explanatory. "Room Time" is for time spent in his room alone and not making a mess and letting Mommy do work. The last two are for staying quiet when Mommy is on the phone or when Mommy is talking to Daddy.)
Resources:
1. A Mom Blogs About Paying Her Children to Behave
2. A How-To build a token system article
3. Another How-to build a token system article
Posted by Jenn at 4:39 PM

I wasn't able to toilet train Theo until he was 4.5, and we had to use candy as a bribe. I see where your husband is coming from, but you have to go with what works. If quarters work, great! You gave me a great idea, I didn't think of taking something away to discipline, and time outs aren't really working anymore, so I'm going to try that!

Elyse, toilet-training was super long for me too and I definitely used candy a lot. I think taking something away for discipline is part of the ABA philosophy, that is what they do with my toddler. Anyway, hope you can find something that works for you.

You are a beautiful honest writer. If my little one stays asleep, I shall go read some of your older posts. We like to reward our kids with ten minute family activities, we have a list of activities posted on the fridge, everything from walking the dog to a puppet show to writing a song. Three to Five tokens (depends how often they are given out)equals one activity. I also have a points tool I'd like to share with you, let me get a copy and send it to you. Lynne Kenney