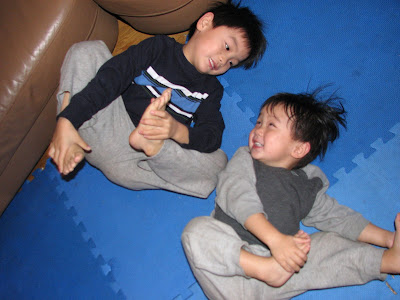 I love Tara Parker-Pope. I loved her column when she was at the Wall Street Journal but her blog at the Times is just terrific. Recently she wrote a post in her blog in response to an NPR story about how a typical girl deals with her Aspergerian brother.

That got me thinking. What will happen with my two boys? Will their disabilities be the same? Will the DAN! cure them all????? If not, what will our life be like? Will their ADHD bring them closer or keep them apart? Right now even though Spencer is only 2, his challenges seem similar to Logan's which means he'll likely be diagnosed with ADHD. Although I don't want Spencer to have it, I think it might be a good thing for the family. Isn't that crazy to say?

They'll have the same rules. The same token reward system. The same consequences. In a way, I'm hoping that this will be the case. It will almost be easier for me like just the way I'm going GFCF for both of them instead of just one. Both of them don't know what "typical" life is like. They have so many therapists. They must think it's normal for them.

All I can say, is that I feel for the girl in the NPR story. I see Logan having to make concessions for his little brother all the time but she's got it so much worse. I pray she finds the courage and strength to overcome her challenges.
Posted by Jenn at 10:00 AM

Thank you very much for a wonderful resource !!!