Spencer is Talking! Hooray for Therapists! 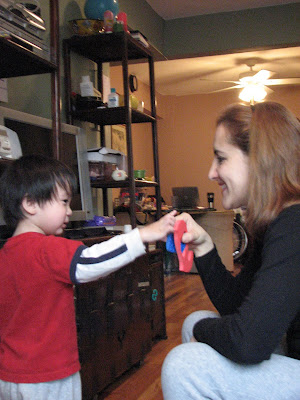 For months I had been very distressed at the lack of language Spencer had. At his Early Intervention 6-month review when he was 21 months old, he had just 5 words.

A few weeks ago, he started ABA therapy and increased his speech therapy sessions and wow do we see changes! Now he is trying to repeat almost everything you ask him to say!!!!!! Since Logan never had Early Intervention, I never had the chance to really watch a therapy session up close but now I can with Spencer. I watch them working with him and see how he responds. He loves therapy. (Pictured: Spencer works with his ABA therapist, Natalia Cardenas who also worked as a speech therapist in her native country of Colombia. Aren't we lucky?)

I know very little about occupational, speech, or ABA therapy and so it's hard to know if what they are doing is making a real impact but so far I found a few clues that tell me they have good people helping them. Isn't that all you can ask for anyway? Every child will progress at his own pace.

1. Spencer waits at the door when he hears the bell ring. He is excited and once even cried when he thought his ABA therapist wasn't coming. Logan also can't wait for his "turn" when we get to the clinic.

2. Spencer's speech/feeding therapist tells me about other options that could help us. I remember when I first met her and how weepy I was because Spencer ate so little. She looked at me and said, "You need a social worker. I have to help your son but you need help yourself." We received social work services right away and that has become a tremendous support to our family.

3. Spencer's speech therapist occasionally has to reschedule a session to go for additional training. I really respect that.

4. Logan's therapist at his clinic will make a point to talk to me about inconsistencies she sees in other reports or IEPs. She really tries to separate the sensory issues from the more ADHD-like behavioral issues. That shows me that she's paying attention. Now that I've been a special needs mommy for two years, I really don't think that all of them are paying attention.

Recently, I was so sad to hear that Logan's therapist at his clinic had resigned. She had worked well with him for 4 months and wrote one of the best progress reports I had ever seen. Candace Mezetin, wherever you are, we miss you!!!!! The good news is that he will get the same person he had before he started with her so maybe she'll be able to tell me if she sees any improvements in him which would be really great since she met him when he was just starting the GFCF diet.

I found a good webpage about evaluating therapists if you want more info:

http://autism.about.com/od/alllaboutaba/ss/abachoice_4.htm
Posted by Jenn at 1:37 PM

Much thanks to you for giving such significant data, and a debt of gratitude is for sharing this Business Promotion system.