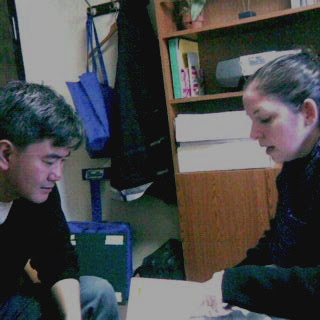 Friday was an extremely important day. We were having our final meeting with our evaluator from The Learning Center in Douglaston, NY which is part of the Jewish Board of Family and Children's Services. I chose to do a private evaluation because I knew that someone would have to be thorough with a kid like Logan and didn't trust just anyone to do it. I called a million places and was so happy to find this center. I was also able to pay on a sliding scale and they did everything for Logan. They even visited his school and attended a progress meeting with all his teachers and therapists to discuss what kind of kindergarten placement he should have next year. (Pictured: Gayle Herman, our very patient and intuitive evaluator talks to Kai.)
I don't know where you live but in New York City, the process of putting your special needs child in kindergarten can be extremely stressful. I honestly believe this process was the tipping point that set off my panic attacks. Before this, I had no history of panic attacks.
Anyway, here's the sunshine: Logan's test results showed that he's above average in intelligence. He had great pre-reading and math skills. We kind of thought he was a quick thinker but it was nice to have a professional tell us the same thing.
Now the rain: he's got a substantial amount of hyperactivity and impulsivity that gets in the way of a lot he tries to do and what is expected of him.
So what does this mean? What kind of placement does he belong in next year? While being careful and respectful, we were told a couple of possibilities.
1. Medicate him: He is a classic ADHD case and a great candidate for meds. So if we medicated him now when the school staff knows him so well as a non-medicated Logan, we can see if a medicated Logan can fit into a CTT class where a large (22+) class of typical and special ed children would learn from both a special ed teacher and general ed teacher. This type of class would give Logan a chance to interact with and model typical kids. I saw such a class and loved it but knew the size would overstimulate Logan. For now, meds would be the only ticket into this kind of class.
2. Don't do meds and find him a small size class that could give him more attention. The problem with this option is that in the public schools, the smaller the class, the lower the academic level and he needs extra attention but a challenging academic level. I had already visited a class of 12 children, the highest academic level for special ed kids, in a public school and immediately felt it wasn't right for Logan. Private schools can offer smaller class sizes and challenging academics but that's a whole other process.
Even though I complain about Kai, it's uncanny how we think alike sometimes. Both of us just looked at each other and said "Let's medicate. Let's do it! Let's see if he can get into that CTT class!" ROAR!

After we left the meeting, the roaring stopped, especially after we met our social worker from Theracare. I purposely scheduled her visit on the day that we would get all these news and she would be able to talk to both Kai and I together. Since day one, our social worker, who prefers to be unnamed in this blog, has been our greatest advisor. She helps us make great decisions for our family.

Anyway, it's amazing how fast you can change your mind once you have some time to digest a piece of important news. Here's what we thought:
1. If we medicated him, there would be no way to know if the DAN! treatments were working. We had already spent thousands of dollars along with a lot of blood, sweat, and tears. (Many of which were mine!!!!!) I wasn't ready to throw all of that away.
2. He's still so young to medicate.
3. It's not like we can't put in a small class next year and then medicate him after the teachers get to know him and then possibly try to move him into a CTT class if there is a space. This could mean that Logan won't have a smooth first year in "big" school. That makes me a little sad.
Kai and I must have talked about it ten more times since then but in the end we decided to hold off on medication and hope that he gets a great placement next year. We've already applied to a couple of private schools too. We also decided that it was time to talk to a lawyer. Hooray, more bills to pay! I should celebrate this fantastic decision with 3 or 4 glasses of Shiraz! Because only Shiraz can quell the excitement of those bills to come. Or perhaps, maybe I'll just go into Logan's bedroom now (he's sleeping) and whisper in his ear that I'm going to get him the best bulldog lawyer I can afford. Then I'll have me some Shiraz.
Link: An old New York Times article about CTT
Posted by Jenn at 11:51 PM

DAN! stands for Defeat Autism Now! It's a protocol for the treatment of autism. Many of these people believe that ADHD is on the spectrum of autism and that DAN! can help ADHD children so that is why we're trying it. You can look on www.tacanow.org or www.generationrescue.org for more info.

The Reading Focus Card
I understand the issues you and your child contend with regarding ADHD. Focusing is a real issue with this challenge.

You might be interested to learn about a new and easy-to-use (non-invasive and inexpensive) focusing/reading tool for those with ADHD, dyslexia, and other learning differences. It is called the Reading Focus Card.

This tool helps a reader focus on a line text and minimizes the surrounding text. In this way, the reader can comprehend and retain more of what is read.

Please visit www.readingfocuscard.com to learn more about this tool. To read about the 2007 focus study results for the Reading Focus Card, please visit http://www.brennaninnovators.com/study.html.

I hope you will find this information helpful.

What have you done since then? my son has ADHD and SPD..your story is so real to me. I am asian and husband is Italian... guess we got something in comment.

My son is in CTT.... medicated.. just like you, i did everything under the freaking sun... i get him the best dr. I am also in NY

you might let me know if your son is in state private school? or CCT in pubic now. Thank you.

Thanks for your great information, the contents are quiet interesting.