When Mom Has ADHD 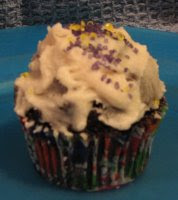 Today was kind of shitty. Can I say this word? I promise to keep my blog clean but really today really was.

I was going to make my son's GFCF cupcakes this morning for his school birthday party during Spencer's ABA session but I couldn't find my unbleached recycled cupcake liners. My sister-in-law and babysitter in their extreme kindness like to rearrange my totally disorganized kitchen when they babysit. After looking for 30 minutes, I gave up and decided to just go buy more. Unfortunately, in my neighborhood, I have to get the liners that aren't as toxin-free. Not the end of the world, I thought. It's my fault for being so disorganized.
I didn't mind going out. Spencer needed a nap and sleeps longer in the stroller anyway. I need him to sleep longer today because I think he gave me his cold so I needed the extra rest. However, as soon as I got home, he started coughing and woke himself up so I had about 10 minutes time to myself.

I started on the cupcakes and worried the whole time I was making them. It's only my second time making cupcakes. Anyway, I made the dough and filled up 9 cupcake liners and was so happy because I had made just the right amount of dough, I thought. I put the cupcakes in the oven and took a deep breath. Everything would be alright.

NOT! Why didn't I use my timer!?! This is such an Adult ADHD move. I do this all the time. My husband is always turning off things that I leave cooking on the stove. I overbaked my cupcakes by 15 minutes! Fortunately, they didn't seem burnt and still bounced back when I pushed it so I decided not to make another batch. Besides, I used this great recipe that calls for sorghum flour and had used the last of my stash to make the cupcakes.

Then I realized I didn't make enough cupcakes which just means that the teachers will have to share one cupcake but still, I felt like a fool. There are seven kids and three teachers. Why did I make nine? I think I had enough batter to make ten slightly smaller cupcakes.

Then I felt sick today. I haven't seen my acupuncturist in two weeks because she's on vacation and I think I had that chi-blocking issue again. I felt so yukky I actually had to vomit.

I know I try to make my posts positive but sometimes, we just have our crappy days and sometimes I really do feel like I have ADHD too. I used to work with an Adult ADHD expert as his publicist and once I got up enough courage to ask him if he thought I had it. It was over the phone but I could feel him rolling his eyes like there was no chance of me having it. So, maybe I don't. Anyway, if you are ever curious that you might have it, try the screeners he developed. It's easy to use.

(Pictured above, the final product, carob cupcake with casein-free vanilla frosting sprinkled with naturally colored sugar crystals by India Tree. Let's hope the kids will like it. It'll be the first time Logan shares his GFCF treats with his friends at school.)
Posted by Jenn at 12:14 AM

Tamara,
i didn't know that you commented on this post until now. I have a toddler who is very similar in age with yours, email me, let's compare notes.