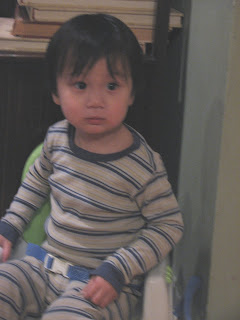 I remember when Logan was two and I was having a really hard time handling him. My pediatrician kept saying he was just being a boy and that it was my fault for not disciplining him. She told me to buy this really lame book called Toddler Taming and it did nothing for us except to make me feel more like a failure.

Now, we have Spencer who will be two in a couple of weeks and already, he is turning into Logan #2. So today, I decided that the only way he'll sit in Time Out is if I strap him into a portable high chair that is placed on the floor. Does this sound like a bad idea? I know the point is to make him stay there on his own but many times, he'll just roll around and lie on the floor!

So I'm trying this for this week to see what happens. I've read 1-2-3 Magic but I wonder if any ADHD toddler was ever able to stay in Time Out. It took us years to get Logan to do Time Out correctly. Hopefully Spencer will learn faster. The one great thing is that Spencer sees Logan do Time Out all the time and knows what is appropriate. Sometimes, he does a "sympathy time out" and just hangs out in his own time out spot until Logan gets out.
Posted by Jenn at 9:33 AM

A debt of gratitude is in order for your glorious posting! I very delighted in understanding it.