Logan Can Have Casein!

Yes, it's true and I am so incredibly happy, I can hardly contain myself. 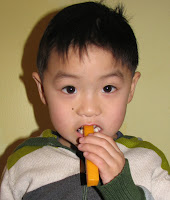 At our DAN! doctor's office, they perform an allergy test where an allergen is injected into the skin, a wheal forms, they measure it, and they repeat the injections until the can figure out his "endpoint" to the substance. We already did it for environmental allergens of which he had tons. They developed a spray which is supposed to neutralize his allergies. I spray his nose twice daily.

Today, we did the same test for foods!!!!!! I was so excited. I was praying that he could have casein and soy. Especially soy!!!!! I need to give my kids soy sauce, I'm Korean! Well, I got part of my wish, Logan's results said he was mildly sensitive to dairy and corn and moderately sensitive to soy. This means he can have a little corn or dairy each week. On the way home, I told Logan that the doctor said he could now have a little cheese and yogurt and he kind of looked at me in disbelief but about two minutes later, he started to beg for the cheese. (Pictured: Trader Joe's Cheddar Cheese Sticks, the whole 5 grams of protein was devoured in 60 seconds. I'm also really greedy, I made him eat five baby carrots before giving him the cheese.)

For wheat, he came out to be very allergic. That is why we were only able to test for four foods because testing for wheat took so long. I can't wait to go back and test for more. We have managed to live without gluten for a while now. Logan is very good about his restrictions. I think it makes him feel special.

More good news: my doctor kind of gave in and said that I can cheat a little and give the kids the soy-free MSG dim sum food once a week. He also gave me something to help them 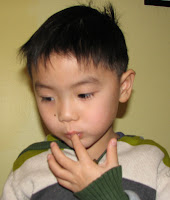 detox. Logan is also allowed to have a little something with soy sauce (the kind with gluten the Chinese use) but then he is not allowed to have cheese on the same day. This means I can give Logan a little Chow Ho Fun! I think he'll really like that but I'll have to be careful because Spencer wants everything that Logan eats. I actually made Logan hide while he ate the cheese. Maybe I won't let him have the Chow Fun at all. I don't care! I am so happy today. I had to take a Klonopin because I was so excited. Am I crazy or what?
Posted by Jenn at 11:10 PM

Thanks for the great giveaway. Wow, what an amazing giveaway!! Thanks so much.