Change My Meds? Ghosts, Be Gone! 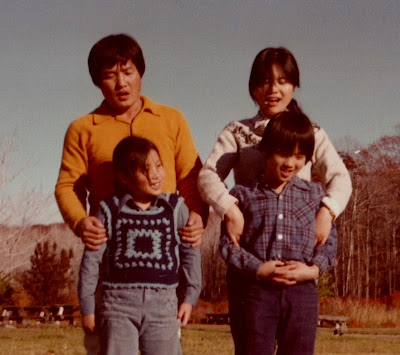 When I was a little girl, my Dad used to call me "Mot Nani." It literally means "ugly child." This of course hurt my feelings terribly. However, he later explained to me that it was a term of endearment because you are attempting to make the "ghosts" lose interest in you by calling you ugly. Parents who called their daughters "pretty" were basically asking the ghosts to cause trouble or take their daughter away.

I say this because if you read my last post, you'd know that I had a most wonderful day but I think I attracted those "ghosts" to come and play tricks on me.

First, I had the worst sleep I had in weeks! I had a weird dream that my husband was driving me to reunite with my ex-boyfriend and then when we got there, I changed my mind and decided to stay with my husband and my ex-boyfriend threw a tantrum. Weird dream - I know but what was interesting was that I realized that I was partially awake after that and unable to fall completely back asleep.

I think since I hadn't taken Klonopin that day, I wasn't able to sleep through the night. I didn't realize how much I depended on it even when I was asleep. Honestly, I didn't think it did much for me during the day anymore. Wine calms me down a lot faster.

The rest of my day was hard since my eyes continued to burn with fatigue. The day got worse after Spencer woke from his nap and basically cried throughout his entire ABA session. No one could figure out why. Then Logan came home and I was really exhausted by then and had to lay down. When I lay down, Spencer pretty much attacks me, grabs my breasts, squeezes them and my stomach (all that flab) and really can't stop himself despite redirection. But I had to let him attack me because I just couldn't sit upright anymore.

Those "ghosts" continued to screw around with us. After being really difficult today, Logan ate all his vitamins and then some dinner and then threw it all up just about a foot away from the toilet. Spencer did his part too by pretty much refusing to eat anything for dinner.

Anyway, ghosts or no ghosts, I realized that I have to rethink my medications. I need to figure out if my anti-depressants are working. I have to face the fact that Klonopin is not working as well as it used to. I know this because I have started to yell at Logan again this week. Also, I can't believe how hard it was to sleep without Klonopin. In addition, my psoriasis has gotten worse and sometimes, I feel like my acupuncturist has to spend much of her time getting rid of all the side effects of the medications in my body.

I also have a confession. I think it's drug-related so I'll get over my shame and just tell you. I found Spencer in my bed in the middle of the night twice and had no idea how he got there. Usually, if Spencer wakes in the middle of the night, we just put him back on his back and walk away. He never sleeps in bed with me but I must have put him there and the scary part is that I have no recollection of doing so.

I still need the drugs. I'm pretty sure of it but I think I need new meds. I wish I could go to a psychiatrist instead of an internist to prescribe my medication but I still have to wait to recover from the kids' medical and lawyer bills since my health insurance has a very poor mental health plan. Wish me luck. I'll be needing it.

(Pictured: This is my family after living in this country for just a couple of years. What do you think? I know you can't see my face that well but was I ugly enough for the ghosts to leave me alone?)
Posted by Jenn at 9:39 AM

Good luck getting your medication sorted out. It is kind of scary to think that you got up and put Spencer in your bed without being aware of it. (I don't think you were ugly at all! You were adorable)

Thank you Twisted Cinderella! It really is so scary about what happened with Spencer. That's one of the reasons I'm afraid of medicating Logan even though I'd still be willing to do it when the time comes.

Is it possible Spencer climbed into your bed on his own and cuddled up next to you? I know my son does that and lately both DH and I have been so exhausted that we have no idea when or how he ended up between the two of us. You would think one of us would have noticed.

Klonopin was great for knocking me out and making me loopy. DH said it was like I was drunk during the hour after I took it. It's possible your body has adjusted to the dosage if you find it not working as well and you need to increase it. Check with the dr.

Forgot to add that you were not ugly. Very adorable.
It's funny what Asian parents say to their kids. My mom still insists my sister was an ugly child. My dad said she was a cute kid and was glad that she did not look smart/intelligent - which in retrospect we wondered if he meant that she looked dumb. Mom- ugly and Dad - stupid. It's a good thing my sister has a lot of self confidence.

We all learn to survive Asian parenting somehow. Wonder how my kids will survive my warped parenting. Anyway, Spencer can not climb out of his crib yet so it means that I put him there. I think you are right, I do need to change my dosage but still it's weird how I don't remember bringing Spencer into my bed.

Have you considered psychotherapy for the treatment of your anxiety? It just seems that a lot of your anxiety is related to situational stress as well as painful experiences that you have held on to from your past. It also seems that you are concerned about how dependent you have become on the Klonopin, which is a potentially addictive medication, by the way.

I am not suggesting that you should give up on psychotropic medication, but a lot of research show that a combination of medication and psychotherapy is the most effective approach.

There are a lot of wonderful post-doctoral psychotherapy training institutes in New York City that provide good and affordable treatment. You might want to look into these if money is an issue.

Hi Anonymous- Thanks for writing. Yes, I know Klonopin can be addictive but it doesn't do much for me anymore so I don't think I'll be taking too much of it in the future. It actually makes me really sleepy so I want to discontinue soon. But thanks for your concern. Also, yes, I want psychotherapy very much however, going to the city would mean babysitting which is an additional cost on top of paying for therapy. I already have a therapist near me picked out who takes my insurance and can see me when the kids are asleep (so no babysitting costs) but I have to pay this big deductible and so that's why I'm waiting. (I wrote about this in an earlier post) But your idea is good and I'll look into it. Thanks!

Thank you again for your flawless service, and I look forward to working with you in the future.