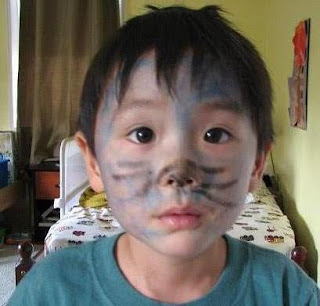 School vacation is here again. The kids get one week off in February. You may know that I have mixed feelings about school vacations. One thing is for certain, it's definitely not a vacation for me. It is always my time to be Super Scheduler and get things done for Logan since he has no school.... dentist, doctor, etc..... but having Spencer with his very busy therapy schedule now complicates things a bit.

Yesterday, was President's Day and Kai had the day off. He told me that he had the day off just this past Friday! For weeks, I had asked him repeatedly if he was supposed to work that day and he kept saying yes and made a face like "leave me alone." So when he told me he was going to be home I yelled at him because I had an appointment scheduled for Logan that day and had already hired a babysitter for Spencer. I respect my babysitter and don't like canceling on her at the last minute. What if she turned down a job because she had us scheduled?

Sometimes I think Kai has ADD. He is the worst at scheduling. Until he got a cell phone, he never knew what time it was because he refused to wear a watch which I now suspect is a sensory issue. His older sisters remind him of all the family holidays and events. Sometimes we are expected to show up at a family event even though they give us just one or two days notice because they are so used to working with him this way. He's the baby of the family. I absolutely hate it. I like to plan things and I am like Logan - I always want to know what is next.

Anyway, I canceled the babysitter and had Kai take Logan to the DAN! doctor for his second round of food allergy tests while I stayed home and finally finished putting up the new quarter charts while Spencer received therapy. I'll write about those allergy results soon. It was definitely interesting.

Anyway, that was yesterday and today, Kai went off to work and thus started the real "vacation" where I am home with BOTH kids alone.

Compared to the last vacation, it was much easier because Spencer now has ABA and then speech therapy so he was occupied for about two hours. You would think I would use this time to do some one-on-one time with Logan but nooooooo. What do I have to do?

I have to proofread his application to yet another private special ed school and call the school to see if I can hold off a couple of days to send the app since the admissions people are possibly out on break. I wanted to hold it off because there was an "essay" portion in the application and I wanted his school psychologist and neuropsych evaluator to read it first before I sent it. (Pictured above: I am including this picture in the application. My evaluator actually suggested I send a photo. I hope this one is okay. Does it say, "How can you say no to this face"?)

I was pretty much on the phone all day long. I think I spoke with my soon-to-be lawyer's office about five times. I called my babysitter twice. I had two therapists call me about today's schedule for Spencer. I got a call from the agency where I applied for "family reimbursement" for Spencer to tell me that I was denied "locally" but now it would go to a "second round," and then to a "third level," where a final decision would be made and then I could appeal if I was rejected. HUH???

I got three calls from another agency that was going to give Logan a free psychological test so that he could possibly qualify for government services like the "family reimbursement" I was trying to get for Spencer. They had actually thought I was coming tomorrow but I had the test scheduled for Thursday when Kai had purposely taken the day off so that we could do these things. This only resulted in more phone calls to everyone and me really trying to calm down. So I ran to my computer and wrote a list of things that I was thankful for today (my gratitude exercise) while I awaited to hear from the agency about my appointment. I wanted only positive energy around me.

In the end, it all worked out and the only loss is that I'll miss having coffee with a new friend. It's a big loss to me because I planned it two weeks in advance and I was really looking forward to it but it will have to happen another day.

I also was at my computer all morning because I had to send the lawyer all of Logan's paperwork and I had new reports that I hadn't yet saved into a pdf file and for some reason my pdf writer wasn't working well so I was attached to my computer when I wasn't attached to my phone.

Result: Logan did not have a single moment with Mommy alone despite Spencer being occupied by therapists for two hours.

This is not why I quit my job and put my career on hold. I am supposed to stay home and use the time to provide more care for my son but all I do is spend time on the phone talking to doctors, lawyers, social workers, and health insurance companies!!!!! Imagine if I did have a job. They would have let me go so fast. I salute all working(out-of-the-home) mothers who have special needs children. Please tell us how you manage to not get fired.

I told Logan that when Spencer fell asleep, I would do Mommy-and-Logan time with him. I was really going to do it. I took Spencer and Logan out after Spencer's therapy. I got Logan's scooter out and we strolled and scooted up and down a long block so Spencer could fall asleep in the stroller. Spencer has a cold right now so sleeping more upright is better for him.

Spencer only slept for about 20 minutes after we came back upstairs. He usually wakes up crying if he sleeps less than the usual 1 1/2 to 2 hours but he woke up happy, sitting there, talking to himself, possibly congratulating himself for ruining Mommy-and-Logan time. Poor Logan. 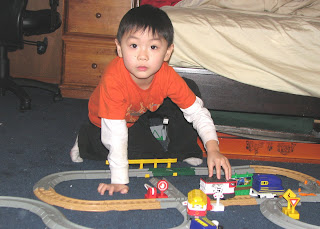 This was my first day of "vacation." I am exhausted. Did you have a day like mine? I sincerely hope not. (Pictured at right: One good thing about today is that Logan showed me he was able to play by himself for a good sum of time. He earned a lot of quarters on our new quarter chart and he even asked me to take a picture of him when I commented that he was playing nicely and quietly -he's gotten hooked on this behavior tactic of mine- instead of saying, "Good Job" I just snap a photo to show my praise. He loves it.)
Posted by Jenn at 11:06 PM

Hi dear
Your blog really very nice. I like it...Hope one day I can build a blog like this.

This is a helpful article.I read this post,this post shares information about breast cancer and it's treatment