The Kind Souls Who Help Our Children 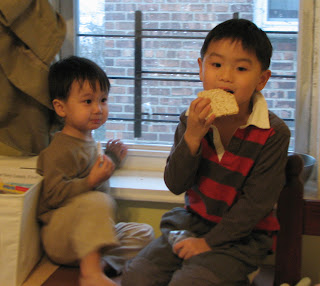 This week was unusual for me. We did a lot. I visited a private school for Logan on Thursday. I was lucky to have my neuropsychological evaluator come with me to the school. She needed to see the school anyway but it was great to get her input as we were touring the school.

Kai was home and sat in on the team meeting that the therapists have once a month to talk about Spencer. I was happy that Kai got a chance to see how much work goes into ABA therapy and the collaboration that goes on between the therapists. I was also happy that he would have to listen to their recommendations directly instead of me telling him what they said. I think he usually half-tunes me out when I do that, but I have no proof. Grrrr

Back to the school visit: It was wonderful. What's more, the people were very kind. I have noticed that in a lot of people working in special education programs and schools. I once visited a public school in Queens. All the staff members of this school were offering their help to everyone who visited, even if they didn't plan to go to that school. One parent coordinator said that if other parent coordinators of other schools don't help them (the parents), then to call her and that she would speak to them. It was amazing. Here are these people, likely underpaid and overworked offering help to people for which they will never receive credit.

It doesn't stop there. After the school visit on Thursday, I took Logan out of school early to take him to a place called the Queens Center for Progress. They do lots of things there for the developmentally disabled and I was referred to them from an agency that was trying to get me to qualify for services such as "family reimbursement," to help with all the bills we have to pay. The Queens Center for Progress was just supposed to give Logan a test and then they'd send the results to see if we were eligible. I brought my neuropsych results and showed it to them.

Once the psychologist, Andrew Chase saw the results, he immediately grew puzzled and sort of looked at me like "Why are you here?"

As it turns out, I should have never been referred for testing because Logan's IQ was too high and he would have never qualified for anything. So it was a complete waste of my afternoon, but I wasn't mad and normally, I would have been really annoyed. However, the psychologist, Mr. Chase handled Logan's case really respectfully and carefully. He even called his supervisor, Dr. Brower, to consult with him further and then they called the person who sent me to this clinic. At the end, the results were that I didn't need to be there and there was no chance in hell Logan was going to see any money from the government for his disability. The afternoon was a complete waste of time and my husband had even taken the day off so that I could get Logan to take this test but still I wasn't mad because Mr. Chase and Dr. Brower were so kind to me. Sometimes nice people can make you feel so at peace. I hope I can have that effect on people some day.

As we walked out of the organization, which was a huge building, we saw lots of people with much more severe disabilities than Logan. I just thought, gosh, this building must be full of the nicest people trying to help those who can't help themselves and while my child needs help, at least he has me and on most days I can manage. I just wish we had a little bit more funds to increase the quality of our life but I guess we're not the only ones who feel that way. Anyway, if you meet a kind soul like Mr. Chase or Dr. Brower, don't forget to tell them how much you appreciate them. We, especially, our children, need more people like them in this world.

(Pictured: Logan and Spencer love to hang out by the window. Even though Logan doesn't qualify for these services, we are still awaiting for Spencer's results. Hopefully, some good luck will come our way.)
Posted by Jenn at 10:08 PM

I don't know what I wouldn't do without my ABA therapist. She works on weekends and really keeps my son engaged and learning. He has made so much progress that he is become closer to our whole family. There are no words to describe people like her.

nice information.Have a medicine website. there is a medicine that seems to work.