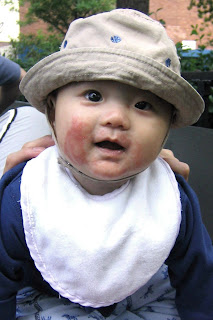 When I used to be a hospital publicist, we used to have to work on stories all the time about "a new study" that refuted another study on the same subject just weeks prior. For example, one week, chocolate is good for you but a few months later, a study would come out and they'd say that chocolate has something that is not great for you so you can only eat a tsp per week or something like that. As a consumer, isn't that the most annoying thing about the news?

Here is a new story about food allergy tests not being accurate. All DAN!s would probably say this is old news. Still, I am annoyed that there isn't something more reliable for the general public to use. I remember that my kids only threw up on eggs but never showed symptoms on anything else. They both had crazy eczema too. When I finally got an allergy (blood) test on Spencer and he tested positive for soy, wheat, dairy, peas, and other things. I felt sick to my stomach. I had only seen a reaction to eggs and he had eaten Yobaby everyday for months. I felt like the worst mother in the world.

I don't know what to believe anymore. What causes eczema, is it food and/or environment? Tara Parker-Pope says both.

Are my kids really allergic to gluten and corn? Can I believe my DAN doctor's allergy test since his are different from the ones in the story? Today Spencer is also getting a conventional allergy test even though my DAN! won't rely on the results totally, we're just going to take a look at what it says. Even though they say it's not totally reliable, I still hope that he tests negative for much of the things that came up in the last test. Nutrition is a concern and my kids are really bored with their food. They have ADHD too so you can imagine how fickle they are.

P.S. In the article, one doctor is quoted as saying, that if your child doesn't react to the food then he is not allergic. But there are so many ways a child can react and isn't it possible that we may not notice all the reactions? This is frustrating but at least some parents may find this news helpful and seek more answers. They may even try bio-energetic assessment or NAET. I'll go into that someday.

Pictured: Logan at 5 months with crazy eczema, not just on his face, it was all over his body too. I rubbed so many steroids all over him but it took so long to heal. That was when he was drinking milk-based formula. I wonder if that caused it. We'll never know, will we.
Posted by Jenn at 8:59 AM