What the Hell is in the Water? 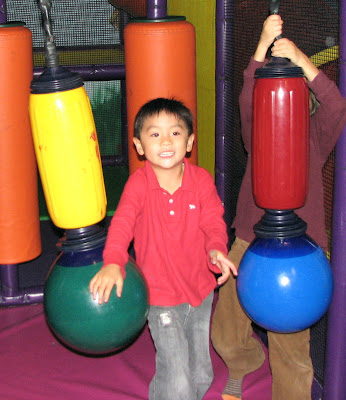 In my new quest to be a more social family, we accepted an invitation to a 2-year-old's birthday party in my neighborhood. Whenever I get an invite, especially from a non-special needs family, my immediate reaction is to decline. There isn't much declining going on anyway. Logan does not get a lot of birthday party invitations. I think it's partially due to his behavior and partially due to him going to school away from our neighborhood so he doesn't know the kids in this neighborhood that well. However, since Spencer is younger and he's not really "friends" with any of these kids, Spencer seems to get more party invites. Anyway, we decided to go and try to be normal and have fun.

We actually had tons of fun and even felt relaxed! I watched Logan play with the birthday boy's Geotrax for a long time. He was having a great time. Spencer as usual, was very clingy but after thirty minutes, he finally let go and wandered around a bit to play with the toys. I wonder if this is an improvement because of his vitamins or ABA or just maturity. I'll never know. This always drives me crazy.

It was then time to eat and all the kids were eating the "real" pizza and eating the beautiful cake that the parents had brought to the party. I am so out of it. Did you know that they make cakes from cupcakes? They line up the cupcakes and then put some kind of whipped cream frosting on top to connect all the cupcakes into one cake. How convenient and cute!

My poor kids. They couldn't have any of that, but Logan understood. Spencer doesn't eat GF pizza and we brought him something else to eat. I had baked GF pizza for Logan in the morning so that he wouldn't feel left out. I actually think Logan expects it now. He also expects a GFCF cake for him if there is going to be a cake at the function. I have a spoiled GFCFer. Logan ate tons of pizza and Spencer ate up his cupcake and Terra Stix very nicely. The birthday boy tried to take some Terra Stix from his hand and Spencer yelled at him "SHARE!" Oh well, he's getting closer to the meaning.

Anyway, the gluten free pizza steered the parents' conversation to the area of special needs. One mother believed that her child had sensory processing disorder and was having her evaluated. I said "automatic toilet?" and she just looked at me like "So you know!" Of course then, I told her whatever I knew to help her get the most services to which she was entitled. She didn't even ask me for the extra info. I just started blabbing away like I usually do. I wonder if I ever annoy people like that or if they really want to hear the information.

She also told me about a friend who had a baby whose throat swelled up from eating barley and now is freaking out about what to feed her. I told her to tell her friend to call me. Another friend at the party just had her child evaluated for all sorts of areas and luckily will only need speech therapy but is still worried because he lines up toys. I wish that child would qualify for ABA somehow. ABA was the express train to getting Spencer to talk. Another person at the party worked with special needs children and was trained in ABA.

Anyway, what the F is going on? Here I am on this blog saying how lonely I am being a special needs parent and I go to a typical child's party and I'm surrounded by special needs parents and people who work with special needs children! (She gave me some good advice btw.) When I worked with an adult ADHD expert, his reasoning for all these late diagnoses of today's adults was that we just didn't know about it back then. However, I really question this theory now since the autism rate has grown astronomically recently. Could something similar be said for ADHD? Maybe people might have had it generations ago but maybe the symptoms weren't as bad as they are now and maybe there are more cases of it now.

I am convinced that my brother has ADHD and I asked my mother what he was like when he was Logan's age and she said he may have pulled a few pigtails in nursery school but he was never like Logan.

I don't know if it's the vaccines, the water, the chemicals in our floor cleaner, or our toothpaste but clearly something is wrong. We've done as much as we can afford to keep our house chemical-free but if we knew more, maybe all of our kids could have an easier time growing up.

Pictured: Logan at at party a couple of months ago at a place called the Birthday Zone. It was an over-stimulation nightmare: very loud music, a jungle gym, and no structure. Surprisingly, Logan did okay but Spencer was so upset, I had to hold him for an entire hour until he couldn't take it anymore and we had to leave.
Posted by Jenn at 9:26 AM

I know it's so sad... I am really open about Gabe and Hannah's problems so I get a lot of parents asking me questions. I am currently helping two parents get services for their children. I definitely think we are missing something or maybe everything we add to our food and water all these years and all the enviornmental pollution is catching up to us...

It's so important to realize that every time you get upset, it drains your emotional energy.