A Change of Pace (for Everyone) 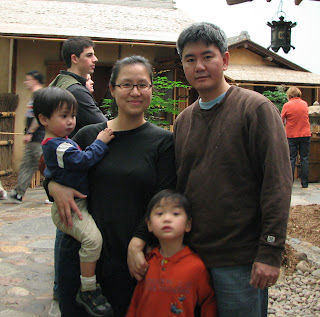 At one of Spencer's team meetings, his therapists all advised me to break some old habits and try doing new things. This meant, trying new foods which requires me to offer him a new food at least 15-20 times. How tiring! It also meant that I had to try to get my family to eat together at the same time. I started laughing when they suggested that but I told them I would try and I knew I'd have to do it on a day when things weren't normal, when we had to break routine. However, I must say that I really love my routines. To me, they remind me of goals, talk to my children without me saying a word, and help me remember to do things that I would normally forget.

Recently, I was invited to spend a couple of days at my brother's new apartment in Philadelphia with his fiance. It would mean that I would have to break some routines and go out and do something very different. Could two special needs kids stay in a car for over two hours? Can I handle their diet issues outside of the home without killing my host and be able to go out to eat at least once? Can they handle being in a home that doesn't have children and thus not childproof? Can I handle it? There was also a side issue. My mother was invited too and she actually decided to go which was amazing because she treats her job like a special needs child and never leaves her baby. Even when she is home or visiting my place, the restaurant, where she pretty much runs everything, is always on her mind. Yes, my mom handed down her neurosis to me. It's okay. I still take responsibility for my own actions.

We decided to go and those two days in my brother's home was a little tough on us. Spencer clung to me as soon as I opened the car door. We hadn't even entered the apartment and already he was trembling. The elevator had windows and it seemed to zoom up and down and I could feel his legs locking onto my waist. "Did I make a mistake by coming here?" I wondered. But the minute we got to my brother's place he was happy to run around and play. I think it's because both Logan and Spencer knows who is family and they feel instant love and comfort. My sister-in-law (to be) even had bought special plates and cups for them and they were so happy.

Still, it was a bit of a sensory overload for them. Even going into my brother's apartment's lobby scared Spencer. My brother moved into a converted factory-turned-loft. It was beautiful but one thing missing was that there was no door for the bedroom. That was the first thing I saw when I walked in. How would I put Spencer to sleep if I couldn't turn off the lights and shut the door? Oh well. "A change of pace is good for everyone," I told myself, "Let's see what Spencer will do." Can you tell I am very protective of my youngest? Maybe too much.

They also started dancing as they heard new music and of course, Logan would not stop playing with their lamp. Oy. It was one of those jointy skinny bending lamps that looked more like a robot arm so Logan would bend it and turn it off and on and he just couldn't keep his hands off of it. Yes, this is how I know he's still impulsive but I know that he tries really hard to listen.

Spencer lit up the whole room after dinner, none of which he ate of course but nevertheless, he performed Itsy Bitsy Spider, Open Shut, If You're Happy and You Know It, and Wheels on the Bus for everyone. My mother fell in love with him right there and perhaps for a second she forgot her demanding job. Kai also, had never seen Spencer do all these things and so I was happy to just watch Kai marvel at Spencer's amazing progress. I don't think we expected nor saw anything like that from Logan at that age but we neither pressed Logan to do these things nor did he have any of the therapy interventions that Spencer has now. My family doesn't believe Spencer has special needs now and I credit his therapists from Theracare and quite possibly the GFCF and all other things F diet for this change. I tried to explain that Spencer's behavior was very similar to Logan's (at that age) before we got him therapy. Actually Spencer was worse because Logan never went on a food strike and was able to self-soothe with a blankie and pacifier. 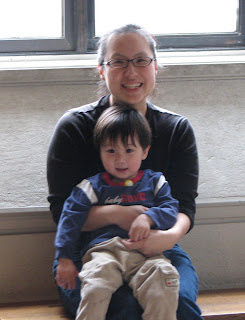 What did we do about food? It's pretty much what I didn't do. I brought a lot of stuff which never left my bag. I let them eat some cheese which they both loved. Oh my gosh, does Logan love cheese. I think it's a better motivator than his GFCF candy treats. And my brother who is a food snob loved that Logan appreciated good cheese so he would not stop indulging him. I had to make him stop after a while. I didn't want him to have casein overload. Who knows what could happen? Possibly nothing, I worry too much.

Okay so I totally caved on the food part but who can blame me? It was only for two days and it's not like my DAN! doctor said they can never have these foods. They are allowed to have a little occasionally so there was no better time to give them these foods than when you go out of town and you need the convenience. However, I must say that going out of town is never a good time to test foods because anything can cause a reaction and you'll never truly know the cause. I could tell that there were different allergens in the air. Even I got a little sniffly.

Was it all roses because we weren't totally GFCF which is always the biggest stressor for me? NO WAY! Even with the extra set of hands from my mother, brother and new sister-in-law, they were still a handful. An eczema rash that I suspect Spencer had been getting from the small amounts of corn snacks that I use to entice him to eat veggies actually blew up at my brother's place. I think it was from the cheese or possibly just from the new environment. My brother's place smells really nice but that could be bad for an allergic kid.

Overall, Logan did well and was happy to be in the new environment. He absolutely loved the Please Touch Children's Museum and had some pretty good behavior there despite the huge crowds. At my brother's place, I had to figure out how to make him cooperate without dragging my entire token reward system with me. (No quarters on the walls). It was pretty much back to using praise and threatening to take away his beloved Geotrax trains. I was really prepared to leave one in my brother's place and that would mean he couldn't have it until we returned there and who knows when we'd be invited again. Luckily, he earned all his Geotrax trains back and I taught my mother and sister-in-law that he needs to be ignored for bad behavior and praised for good behavior. He picked up on that right away and so did they.

My mother also got to be a Grandma and said, "Let him have the cupcake! Why are you bothering him when he's eating!" when Logan helped himself to one of my GFCF carob cupcakes. I got mad because he didn't ask for it although I did leave them right next to him- too tempting for an impulsive kid, I should know better. Once again, I was reminded that I have to relax more about food. This is the lesson that everyone (especially readers of this blog) tries to teach me but still this is so hard to achieve. Maybe it's like all of my friends are trying to tell me that I smell and I say that I know that I smell not really knowing how badly I smell and I say that I will try hard to shower more often. I think the trouble is that I just don't know how much more often I should shower because it is so hard for to me to sense how badly I smell. I bet Logan has the same issue as I do. We are both trying. Either way, Logan had his cupcake and after seeing that many of my cupcakes were eaten by my boys, I was happy that I baked them. 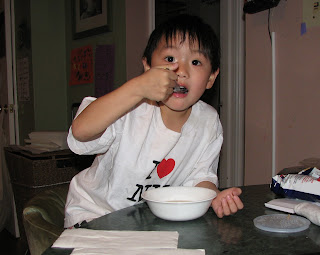 The aftermath: I didn't realize that there would be one but there were a lot of positive effects to going away for two days. When we came home, the boys had snacked a lot in the car and Kai and I decided to eat first and feed the boys after a bath but the minute we sat down, Spencer got curious and immediately, I put out two bowls of soup with rice and the two boys fed themselves at the dinner table with Mommy and Daddy and no T.V.!!!!!! A huge milestone for our family. Okay, so I didn't eat much because they needed a little help and Spencer didn't finish his food but Logan did! I was so proud of them and I knew it had everything to do with going away for two days. Additionally, Logan did great in school the next day and Spencer had fabulous therapy sessions at home. Lastly, Spencer tried raisins for the first time in his life and I didn't have to push them on him for the 20th time. He just asked for it when he saw me pack lunch for Logan. There are so many good results from just one out-of-town trip. It can't be a coincidence!

Luckily, we've been invited back and this time, my mother won't be there and my brother and new sis will put the boys down while Kai and I go out for a date. I never thought I'd be so happy that my brother moved so far away from us but it's proved to be a huge benefit! Overall the trip was tiring but I can't wait to go back and challenge myself and my family again. What a great experience.

(Picture on top: A family picture at the Philadelphia Museum of Art! This time, we made ourselves take one with these fidgety kids. 2nd picture: Spencer and mom at the museum. He loved that museum pin! Picture on bottom: Change is good. Logan enjoys a family dinner together.)
Posted by Jenn at 12:22 PM