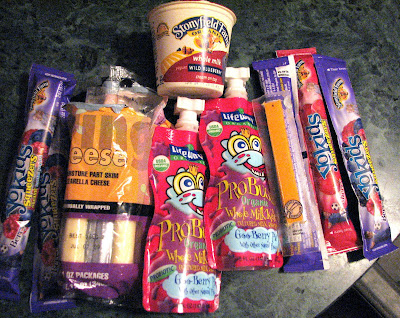 You might recall my post about Logan being allowed to have casein, the protein found in milk. I had been avoiding it for several months to follow the gluten-free, casein-free diet.

In August of last year, I felt the diet wasn't enough to help Logan so I sought the very expensive consult of a DAN! doctor. This practice initially tells many parents to stay off the milk, gluten, and a whole bunch of other things including soy, citrus, chocolate, peanuts, peas, corn, eggs, processed sugar, alcohol, and caffeine. (Yeah, you won't give your kid a beer but this meant that I had to buy alcohol-free vanilla- not easy to find) I was also supposed to avoid preservatives and MSG and things like BHT and nitrites, and artificial food coloring.

So now you know why I might be having anxiety. This is a lot to cut out. I even had to make my own playdough with really really expensive natural food coloring that just looks like different shades of violet.

So after a special allergy test that my doctor used and no it's not an IgG test or an IgE test. They have their own special test which said that I could give Logan a little milk and corn. Corn? Who cares about corn. Milk has the protein. Milk is everywhere. Milk is yogurt. Milk is cheese. Milk can be on top of my gluten free pizza! I almost cried when I heard the news. Logan loves cheese.

When I first gave it to him, it was done sparingly but after a while I think I overdid it. I used the squeezable yogurts to encourage him to eat his lunch. I used cheese to encourage him to finish his breakfast. He always loved yogurt and cheese. I am totally into ABA now, can you tell?

Then something weird happened. He changed. I found him clinging to Mao Mao more. That was the first sign. Mao Mao is his dirty torn-up blankie that was once a towel with a lion's head. Mao Mao is not allowed come out of Logan's room because we don't want to spend an hour looking for it at bedtime but for some reason, Mao Mao kept coming out of the room when for months, Mao Mao never left the bedroom because it was a rule on my chart of rules. He was also more emotional. That was weird too. And he didn't go to his time out right away. Of course no kid rushes into his time out but he really was different.

Who was this boy? I called the school to see what they saw a difference but they said no. How could this be? Why only at home? Was it me? For a week, I thought it was me and maybe I was in some mood and he was keyed into it but then he had two poop semi-accidents which (never happens) and I knew it had to be gastrointestinal. This confirmed my milk suspicions and I was so sad. It's like when you finally come to the realization that your boyfriend is cheating on you. You know what you have to do. You aren't even angry because you've known for a while now. You are more afraid of all the changes it will cause.

Taking away something that makes your child happy is just heartbreaking. For moral support, I wrote my fellow yahoogroup folks and they all said to take it away. One asked, if I would give my diabetic child something that would shoot up his blood glucose level. Of course not, I thought, but still, I'm allowed to mourn, right? The food you see in the picture in still in my refrigerator. I am too heartbroken to throw it away.

I do have some good news to report. I took the food away a few days ago and the old Logan is coming back. It's not a clear-cut change but he's definitely moving in the right direction. Wish us luck!
Posted by Jenn at 9:00 PM

Thanks nice providing information.Please check out site. to get buy medicine online from Online medicine store in USA.