Paying Your Child to Behave Part 3 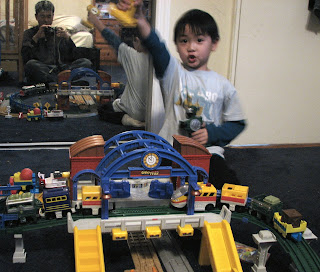 Just wanted to give you an update on our paying-your-child-to-behave plan.

So far, so good. He is still interested in earning quarters for good behavior. He still looks at the chart to see how many quarters he gets for whatever good deed he does. He also corrects me if I don't give him enough quarters as in accordance with the chart.

I also use quarters to challenge him. I will say if you can finish cleaning up these blocks in 15 seconds, I will give you one quarter. I start counting and then he will start rushing. I think my counting is more effective than the timer sometimes because he is constantly hearing my voice and I guess it just sounds like a very loud timer ticking just for him.

I also find that he can learn to negotiate with the quarters. I am not sure where I read this but I think it was in 10 Days to a Less Defiant Child by Jeffrey Bernstein where he said that teaching your children to negotiate is a good skill that they should learn. So we negotiate quarters with chores and I think he's happier because he feels he had a say in how many quarters he gets.

One thing not so great that I did notice was that he tried to pretend not to care that he lost a quarter a few times by saying, "I could earn it back." After hearing that one too many times, I told him that it sounded disrespectful and he still didn't stop so I gave him a time-out and he no longer says that anymore. 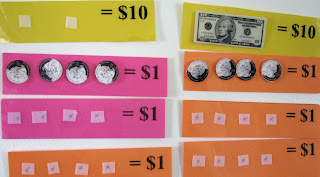 We made some changes too. My husband saw that there were quarters all over the apartment and it looked a bit overwhelming. The whole point of putting them on the wall was so that he could know how much he had but when you have too many, it defeats the purpose so my husband came up with the $10 bar idea and together Logan and Daddy convert quarters to a $10 bar when he has enough. (I also made Daddy go to laminate and cut them at Staples so he gets a sampling of how much work this was for me) Overall, this was a really good move because he was able to work his way up to something more expensive which is of course is something he really wants. This time it was the Geotrax Grand Central Station. Coincidentally, Toys 'R Us has it labeled as a toy for "Differently-Abled-Kids." Anyway, it took weeks but Logan finally earned the $54.00 he needed to buy the toy. I was really proud of him. He worked pretty hard that last week.

The thing that I found cutest about this whole thing which is probably off-topic but what the hell... Logan takes the "dollar bars" off the wall and lets his little brother attach the velcro quarters onto the dollar bars since Spencer can't reach that high. I guess this shows generosity or caring on Logan's part because you'd think he'd be so proud to get the quarters and he'd want to stick them on himself. I love my little boy's heart. I just gotta train that brain of his to self-regulate more!

(Pictured on top: Logan shows off his new toy. Below: the new $10 bars Kai made to help organize our system.)
Posted by Jenn at 12:41 PM

I think it's awesome. Good for you (and Logan) to find a system that works.