We Finally Went Out on a Real Date! 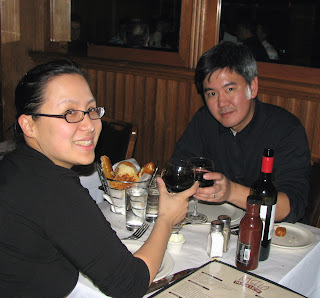 It was Kai's birthday and we used it as an excuse to finally get out.

This isn't our first date this year and I am including the year 2008. We did have my brother and his fiance babysit once a couple of months ago but for some reason, we were really not used to going out that we just went to a restaurant in the neighborhood and saw a movie in a really old awful theater a few blocks away.

This time, we decided to really have a date. We hired a babysitter and we made reservations at one of the best steakhouses in New York City. Kai loves a good steak.

Can I tell you something embarrassing? Since Kai goes to work everyday, he wasn't as shell shocked as I was to be "out." I go to playgrounds, health food markets, and visit special ed schools. That is my life. I knew I was in trouble when I realized that the closest thing I had to make-up were Crayola markers. I no longer own any lipstick or eyeliner! I have no idea where I put them and how old they must be.

I was even more "in the woods" when I got to the restaurant. I am not used to bread on the table with rich butter in a small ramekin with a little piece of wax paper on top. I am not used to waiters, wine lists, raw oysters, and most of all, bathroom attendants.

I went to the bathroom without my purse and I felt so bad. I couldn't give her a tip. She did her job anyway and I even told her (and I swear I wasn't drunk at the time) "It's my husband's birthday, we haven't gone out in 4 years. I am not used to anyone else being in the bathroom. I'm so sorry I didn't bring my purse" She must have thought I was the biggest loser.

Of course when the food came, I was even more "uncool." Ever bite I took was followed with "Wow, oh my God. This is sooooooooo good. Umm Umm Umm, I am dying!" I was even snapping pictures of Kai while he was taking bites of bread. (One for the blog, I thought?) Kai was very embarrassed and told me to put the camera away when our appetizer came. I apologized to the table next to me for the flash constantly going off but they were nice about it and actually offered to take a picture of us.

When we left, I gave Kai my bag and coat and ran to the bathroom to do my "just-in-case" pee and then there she was again - the bathroom attendant! Again, I was without wallet and so embarrassed. I apologized, did my thing, and then went back to Kai, got some money and walked back across the huge restaurant to give this nice woman her tip. I just need to get out more often so this won't happen anymore. 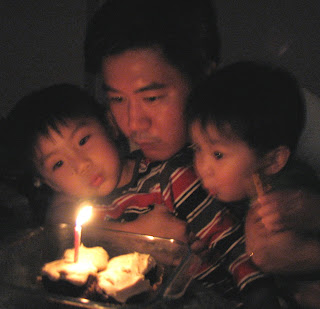 My favorite part of the evening? Kai and I went for a walk and we talked. It was hard to talk in the restaurant with me acting like a nut who had been locked up in a cage but walking in the street.... I can do walking in the street. We walked around downtown Manhattan and joked and laughed a lot before we went home. We almost saw a movie- Slumdog Millionaire. However, if we saw it, we would have gotten home so late and been so tired in the morning. It would have almost been as bad as taking care of the kids in the morning when you're hungover. The truth is, if you really want a big night out with your spouse, you need a babysitter in the morning too.

(Pictured above: Kai and I at a real restaurant on a real date. I need to see the pictures to believe I was actually there. Pictured below: Kai and the kids blow out a candle on GFCF carob cupcakes. Spencer is crazy about carob cupcakes.)

(Note: for those of you who noticed, this post was reposted with some adjustments.)
Posted by Jenn at 1:30 PM

Chrissy,
I'm sorry your comment was wiped out by accident. All I want to say it that I hope you find an excuse to go out. My friend tells me to schedule it into your daily planner. I don't know when we'll go out again but I know the more often we do it, the more happier we'd be. The euphoria from our date is already wearing off. damn.

HAHAHAHAHAHAH!!!!!!!! I went through the same thing last week when I met my husband for my birthday lunch. We went to a really great restaurant by his office and I had no idea what to do. My husband was at ease and everyone was staring at me while I was eating because I kept saying how great the food was. I didn't go to the bathroom because I was afraid of stumbling and I forgot to give the lady who took my coat a tip. But the food was great and I stuffed my face and almost asked for a doggy bag!

Hi Jen,
Please wish Kai a happy birthday for me!!! I have been so occupied with my parents that I haven't had a chance to do much else. I'm glad to have them come visit, but it's pretty tiring being a cook, chauffeur, tour guide. I don't think i've done so much running around in a long time.

I'm so glad that you and Kai had a chance to go out for a nice dinner and walk. Both of you really deserve it! And it sounds like your walk was almost better than your dinner.

Just dropping you a note to say Hi and I'll give you a call next week, after the 16th.

p.s. Give Logan and Spencer a big kiss for me!