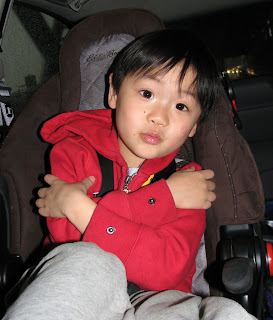 I have been very reluctant to write this post. I have such mixed feelings about medicating Logan. It's a tough decision for every parent.

Last Spring when Logan was only 4, he was so wild and so uncontrollable and seemed to be regressing. That is what our previous special ed preschool teacher had said which was about the only real warning they gave me before they asked him to find another school in the middle of last summer (Yes, that was horrible and that's another story that has to be told.)

By that Spring I was so desperate that I begged my developmental pediatrician to prescribe something immediately but then we found a parent-training program that gave free one-on-one lessons in dealing with ADHD preschoolers and so we decided to hold off on the meds to see if that would make a difference.

It did. I learned a lot. If you want, I'll try to gather the info and tell you what we were taught because some of it was very effective. But overall, I'm sure you heard that behavior training is more effective if you compliment with other interventions. Some parents use DAN!, some use nutritional supplements, some use just medication, and now I have become the (d) all of the above mom.

When I first wanted to do it last year, my husband wasn't crazy about the idea and then I found about the DAN! protocol and I was full of hope. I remember one night it just hit me and everything made sense and I couldn't sleep because I thought I had found the answer and that Logan could be healed from his ADHD.

That was almost a year ago and now I don't feel like I know anything anymore. I haven't given up on the DAN! treatments or my doctor but I think for Logan's sake, this is a great time to try some medication. The most important reason being that he is in a wonderful school with a very small class where the faculty and therapists know him inside and out. And I don't doubt for a minute that they really just care about him so much. Giving him medication under these circumstances are optimal. They are the type of people who would tell me about side effects as well as positive or negative changes, even it was only slight. They would notice because they care and they can.

We are already on a second medication as the first one just put him to sleep. The second one we are trying has shown its side effects already and it's so hard for me as his mom to watch these things. He was sweating and had thrown up and had tummy aches but my DAN! doctor who prescribed it to me, told me to give it a little more time. All of these side effects seem to be gone already but still I'm watching carefully, ready to throw the pills into the trash at any minute. But I've been told that he's a great candidate for medication and I feel like it's a duty for me to give him that chance. From my own experience I have seen side effect appear at first and then lessen or go away so hopefully the same will happen for Logan.

But it's still so hard and I decided to step into my baby's shoes one day and I took one of his pills. Am I crazy!!!!!???? You decide.

I have always felt I had ADHD and so I didn't feel like I was doing something terribly wrong. Have you ever taken one of your son's pills? Even if I truly didn't have his ailment, I felt compelled and so I did. It was very strange. I went from feeling sleepy to relaxed to anxious and then became kind of hot. Wow! These little pills; they are powerful stuff and I'm a grown up and not a small one either. While this experience hasn't changed my mind yet about medicating him or stopping, I am glad I tried it at least once. Of course, I'll never do it again but since it wasn't a heart medication or anything like that, I thought it could be a window to Logan's feelings since he still can't tell me everything he feels.

Well, I'll keep you posted on what happens. It's too soon to say if it has positive effects but I'm hoping for good news. I know that our plan was to start medication if we gave up on the DAN! within a year of trying it but sometimes we have to change courses and take advantages of opportunities as they appear. I think this is best for him for right now. I hope it proves to be the right choice. Isn't that the hardest part of parenting? Having to make choices for another person... I hope the heavens are shining down on our little family this season. It's a tough time since we're looking for an appropriate kindergarten placement for Logan and Spencer early intervention 12- month review coming up.

Admist all this stress, we have my brother's wedding in Mexico to look forward to. I'm going to do the right thing and actually tell my kids in advance and prepare them for the trip. I used to be so horrible and just tell them that we are going somewhere when they woke up. I didn't even bother telling Spencer since he is still so young but I won't be doing that anymore. Wish us luck on all this stuff. I believe good thoughts are powerful and can be sent to other people. We surely need them now more than ever.
Posted by Jenn at 12:15 PM

Good luck on the medication! I used to work in an after-school program, and I think I've pretty much seen it all - the kids who shouldn't have been medicated, the kid whose medication was being changed AGAIN, which was always a nightmare.... and that one boy who you didn't know was ON meds until he went off of them. Some kids, not all but some, really do need them! I think you're absolutely doing the right thing - you've tried everything under the sun, it sounds like, and perhaps one of the medications you try will make everything suddenly click, or take off enough of the edge that with everything else, it's not a problem. Wishing you luck and praying!
I would be very, VERY interested in hearing more about the behavior training for toddlers with ADHD. I just came from an OT session that felt waaaay longer than just an hour because my son is having a "five-second attention span" day.

You never know until you try and you are trying many things to help your son. Good luck with the medication. It is a tough and very personal choice. It sounds like you have a good team surrounding you guys to help with feedback etc.

I think it is great you are willing to explore all avenues to do what is best for your son. I would love to know what meds you have tried, if you are willing to share that. It does affect them differently over time so you really do have to give it several weeks to know what it will be like long-term. I gave up on the first two meds my son tried too quickly but we ended up with something that works great for him in the end.

Please blog on how it goes. I am considering giving Gabe meds so he can pay attention. He is an air head at school. Right now it's okay but once he hits first grade it may be disastrous. I'm just glad he will have the same teacher for another year. I really love her.