My Husband Says He is a "Changed Man" 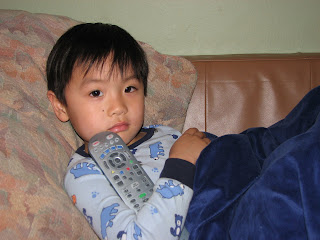 Recently, I let my guard down a bit and let Logan have access to the remote control. This was a big mistake because I forgot that it would mean that the remote would be within Spencer's reach once Logan put it down. So of course one day, it became missing. I figured out that Spencer could have put it anywhere. (I once found the remote in the garbage can!) I got so nervous because my husband gets very upset with me when I lose things especially his beloved remote control complaining that I am irresponsible in letting the kids have access to it. However, this time he said nothing and looked for the remote control with me for close to an hour.

I kept waiting for the ball to drop and complaints to start and he said nothing. It was a real shocker. In my final meeting with my therapist, he advised me to thank Kai for not bickering. I thought that would be REALLY awkward but I mustered the courage to thank him and he said, "I'm a changed man." That really surprised me. I never considered his complaining about my losing things as a fault but maybe he does. I didn't want to pick and pry this one open. But still, I couldn't relax about it nor enjoy it. It was so foreign to me.

I wish I could say that I'm a changed person too but only a few days after finding the remote in Logan's lunchbag (Thank you Spencer), I lost our membership card to the New York Hall of Science (children's museum) in the parking lot within minutes after Kai handed it to me. He stayed in the car to finish his lunch and I was to take the boys in by myself. Mistake #1: He suggested that I take the boys in by myself but we never do that and I was too busy thinking about my call to remember why I don't go into a museum by myself with two boys who like to run around. I was also feeling ill and drowsy that day. I should have just said no and told him that I would rather wait for him to finish but I really did want to give him a little peace to chow down his lunch. I want too many things and am starting to realize that maybe I am not as adept in organizing myself and my thoughts as I think I am. I am really going to stop joking about it and look into a possible symptoms of ADHD in my behavior. My first step will be to go back to my last post about adult ADHD.

When I came back to the car and told him I lost the card, I instantly thought the mean comments would start flying at me. However, he said nothing and just helped me look for it. Looking on the ground to retrace my steps were useless because it was incredibly windy that day so I'm sure it would have flown away instantly. But, I'm not blaming the weather. I really thought I deserved at least one snide remark or something because I literally lost a membership card from the parking lot on the way to the entrance!!!! Who does that? But Kai was quiet and it took an hour for me to realize that he would not say a word.

The next day, we went shopping in the market and Spencer was crying really hard to be held. So I picked him up, paid for my groceries and was about to walk away with my wallet on the counter! However, Kai was standing right there as the cashier told me about my wallet and Kai just said, "That is my wife." This time, I easily thanked him for restraining himself and again he said, "I told you, I'm a changed man."

Has he really changed? I knew that I was bound to lose something again especially on days that are not routine and are full of appointments. Today was one of those days. I was so busy this past weekend that I hadn't planned out how I would execute all the things I would need to do today. When I used to work, I had a new to-do list everyday but now that I'm home, I don't do that as much as I should. Either way, the day started out great. I got so much done. I even bought a formal dress that actually fit me in just 15 minutes. I swear. But the self-congratulations soon turned into a major moment of shame as I realized I forgot something again. Today, Kai and I had to take the boys to get passports and of course, when I got there, I didn't have the necessary information that I only partially prepared in advance. It turned out to be fine in the end but we had a good hour of feeling really crazed.

After he let off some steam, I carefully and calmly explained to him why I wasn't able to be so organized and how it couldn't be helped given our busy schedule the past few days. I'm only human, right? ADHD or not, I do have a lot of things on my plate. I am bound to miss something when I overload myself. I could tell that he was really listening and he seemed to finally understand why things didn't go well. He didn't apologize for being angry but he calmed down so much quicker than usual. Yep, judging from today's mini-fiasco, he really has changed. I still don't know where this came from but I think I'll smarten up and just accept and enjoy this new improvement in our relationship. Tomorrow's To Do List: 1- Exhale.

(Picture: Yes, Logan really was watching TV while holding the remote like it was a new blankie.)
Posted by Jenn at 8:44 PM