Bullying A Child with Special Needs 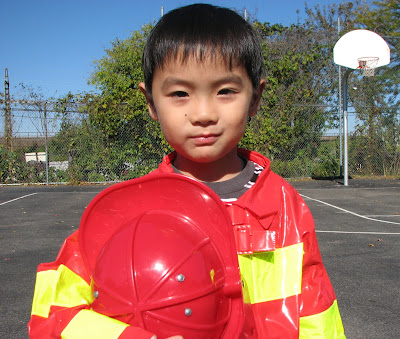 I was recently catching up on my Oprah episodes and found that the day before she aired the big Elizabeth Edwards interview, she talked about bullying and suicide on her show. It really struck a chord with me because this is one of those small worries that I have not yet watered or given sunlight. After the show, I decided to try to at least take a look at this fear and see if now was the time to examine it.

I haven't done tons of research but I think it's a no-brainer. Children with disabilities are at risk for bullying. I have been both a bully and a victim of bullying in the past and am really not proud of how I acted or reacted in both of these roles. I'm trying to figure out how I can prevent this for Logan because I see how he plays with other typical children in the playground and the outcomes leave a lot to be desired.

In fact, there are more days than not, Logan is playing totally by himself. He wants to befriend the wolf pack roaming about in the park but he just can not. I feel so bad everytime I watch this and it's hard to help since I have to watch Spencer the toddler but in any case, I feel that some things can not be rushed. Logan's social skills still need a lot more development.

If you click onto that link above, you'll see that it could be interpreted that it's against the law to bully a child with a disability. I'm glad to see that but having been a victim of racially-based bullying when I was little, I can tell you from personal experience, how completely powerless a child can feel. To a kid, the law would be an abstract idea at best, if I had even known about it. My parents also didn't know what to do. They didn't know about the incidents most of the time anyway. I am now trying to remember these experiences because I need to be proactive about teaching Logan about bullying, especially since he will start "big school" soon. 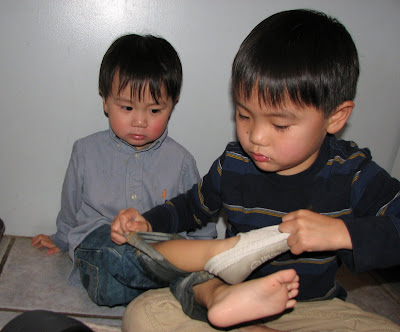 I think I'm going to focus a lot on teaching social skills and building self-esteem. I focus on behavior so much and I don't think I'm doing enough teaching in this area and I really should, right? Couldn't this indirectly impact behavior? I remember that I once watched from a far while he and another boy who was older was playing a game where they were throwing a volleyball at each other's heads (Logan had his bike helmet on so I didn't protest immediately and just stepped back and watched carefully). The older boy never missed but Logan always missed until the moment came when Logan threw the ball straight at the older boy's head. Wham! And that older boy just pushed Logan very hard to the ground even though he had hit Logan's head several times before. That's when I stepped in and called them over to me. Only my son came to me and I praised Logan for not retaliating but now I know I did the wrong thing. I wasn't looking at the whole picture either.

I have to teach Logan to speak up for himself. He still has a ways to go with expressing how he feels through words. I have to push it one step further and make sure he uses his words to protect himself and his feelings. Come to think of it, I do too. I am always the one to think of the greatest comebacks, days after I was insulted. It's really quite pathetic.

I want to teach Logan that he has to say to peers and even to me, "I don't like that," or "That is not right." I think I will also teach him to stand up for others, perhaps that might be the way to go. It's the right thing to do and I believe he is capable of the challenge.

Believe it or not, I have a hard time making friends and I find that it is easier to secure a place in society by volunteering or helping out somehow. If Logan turns out to be this way, I can teach him that he can build self-esteem by helping others while not being a servant. It's a gray area that I need to teach Logan. If he learns to help others, he might build up more courage this way because my little guy can be so afraid at times. On top of that, he's still Asian and racial epithets are still alive and strong today even in a place like New York City.

I forget how fragile he can be since he can be so angry and bossy sometimes. Perhaps, when he talks back and becomes oppositional; those situations might be the best times to teach him how to respond appropriately to adverse situations where he feels frustration and anger. I wonder if I know how to do this. So far, I think I'll be taking tips from Stop Bullying Now.

(pictured: Logan could be in a service position one day. He looks good in red too. Below: if you follow this blog, you'll know that he always tries to help his brother even though he taunts him sometimes.)
Posted by Jenn at 9:21 PM

All good thoughts. This is a tough area. When my son was very young kids would take toys away and he didn't care and would find another toy. We had to teach him to care and how to respond and get his toys back. That was 7 years ago! He got the concept and we've moved on to other things. But the bullying and knowing when to step in is hard and I am always wondering if I am crossing the line too much. When I witness outright bullying I say something. Sometimes it seems I have such high expectations for my kid that other parents of typical kids don't have (like the boy who pushed Logan down after he was hit with the ball meanwhile had been hitting Logan's head with no trouble. Where was his parent? He should have apologized. But that's just my opinion.) Exclusion can be a form of bullying and it is tough to see, especially with your own kids. At lest we are aware and proactive and can educate and include by example.

Yes, all good points. I know in Australia the Disability Standards for Education 2005 make it unlawful for children with special needs, or their families, or friends, to be bullied or discrimminated against. It specifically states that discrimmination includes the lack of provision of the supports the child needs in their education (whether in an inclusive classroom or not). I teach my under-grad teachers about this at university (and my blog is about behaviour) ... and there is a great and growing awarenes of the significant effects of bullying or even being a bullying by-stander (someone who sees bullying happening but doesn't do anything). I hope we can all make a difference!! Training them when they are young with strategies they can used to stand up for themselves is just as important as changing our culture to help children value diversity.

Hi-
My slightly SPD 5 year old son has also been teased and bullied. We took a workshop from "KidPower" www.kidpower.org and it has helped immensely with his feeling "powerful" to stop being bullied. He can use his "walk-away" power. It also covers stanger awareness and other people-safety issues. I found the way these concepts were presented in role-play format was very helpful and effective. It provides the language for begin assertive. If they have KidPower in your area I recommend it.

I too am working on teaching my ADHD child how to stick up for himself. He usually comes running to me crying when someone won't play with him or hurts him (he doesn't recognize the teasing though and plays right into it). I have been working on convincing him to tell someone he does not want to play with them if their negative behavior (insert specific behavior) continues. I am also teaching him to walk away. He got punched a few times at the ball field a couple weeks ago by a friend who is a close buddy and a year younger. We never rolled around on the floor and wrestled with him and I am starting to wonder if that's a problem. They all have to learn how to acceptably find a solution on their own. Despite how we feel some days, they won't live with us forever.