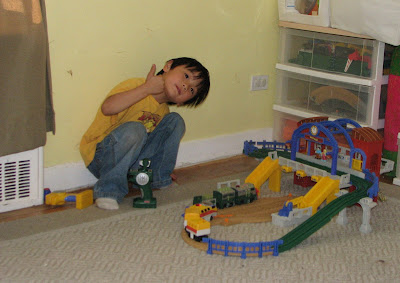 "How many brothers do you have?" my father asked me when I was a kid.

"That's right, just one, so if Mommy and Daddy dies, there is just you and him. You have to share and be good to each other. "

When I was young, my parents struggled to provide for us. I had only one Barbie doll and my brother didn't have much either. So naturally, we had to share everything. Moreover, since I was the youngest, he always had to give in to me. He was also admonished for not being a good model on the days he goofed off. The flip side was he got a lot more attention than I did. He was the oldest and he was a boy child. He was also the only child in my entire family (cousins and all) that was supposed to carry the family name so he always got the fattest envelopes (of cash) on New Year's Day. This was the mindset of a typical Korean American family in the 70s.

It's funny because it's 2009 and I still do a lot of what my parents did back . I want the boys to share everything. I want Logan to give in to his little brother and I demand that he be a good model to him. I also spend a lot more time on him because I frequently screw up whatever I'm trying to do with him.

I've become my mother. Oh well, I like my mother but I know that these values to which I'm adhering is not necessarily working for our family. For example, sharing certain things makes Logan crazy. He gives into his little brother a lot but he doesn't like it when Spencer messes up his Geotrax system which takes a long time to build.

I never respected that he had ownership over anything. Even when he earned it through the quarter system that I designed! My husband told me that I should not force him to share everything. I reluctantly agreed. With ownership, he may act more responsibly.

So finally, I took all of Spencer's toys out of Logan's room and told him that he doesn't have to share anything in his room but that everything in the living room belongs to Spencer and if he brings something into the living room, it must be shared. (Spencer doesn't have his own room and still sleeps in my bedroom.)

Logan seemed happy about that and then he played quietly in his room for a long time. That usually doesn't happen. Also unusual was him cleaning up his room. I was really surprised. I guess giving them ownership can have good results. I now am very very very close to accepting that he would be willing to give in to his brother and share with him voluntarily instead of forcing him to do it like I do now. Given his calmness and cleaning up on his own, I think we are headed in the right direction.

My dear sweet Logan, you are more my teacher than I am yours.

Picture: I think the clearing some of the clutter out of his room relaxed him. He seemed to no longer be anxious (or paranoid) that Spencer would come and destroy his elaborate train system.
Posted by Jenn at 7:00 AM