Being Positive and Feeling Accomplished 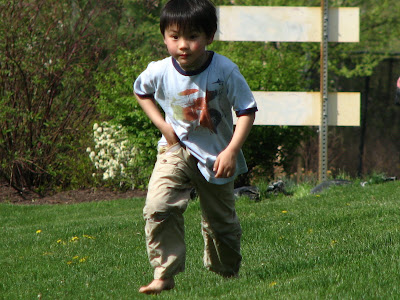 Today, was just like any other day. Logan was slow to start his morning routine and needed assistance to carry out every single thing he had to do. It took him twenty minutes to change into his clothes. We are talking shorts and a t-shirt here; no big production and yet, he took forever. He does that sometimes.

It was hard but I held my tongue and did not say one negative comment. Instead I just tried to recognize anything good he did even if it wasn't that great. For example, it took 15 minutes to get him to take off his pajama pants, but instead of saying, "You still didn't change?!?" I said instead, "Oh, look, you already changed out of your pants, great!" I deserve a Golden Globe.

Strangely, it actually worked. Even though he was so behind schedule, the more smiles I gave and positive comments I made, the faster he worked at getting the job done. The next thing you know, he finished his breakfast, took his pills and vitamins, put on his socks and shoes and was ready to get on that school bus-ON TIME. Those last steps were effortless on my part.

The craziest thing was that he actually said to me, "I'm going to miss you, Mommy." I can honestly say that I have never heard that in the morning! Logan is so transparent. He can and would never hide the fact that I've made him happy. I should count my blessings that he's still expressing himself to me this way. I'm sure when he's nearing those teen years, such expressions could be revolting but for now, I'm lucky my little guy still likes me.

I found something else today about feeling good about yourself. I read a really great story from a guest blogger on Well- Tara Parker-Pope's Health Blog from The New York Times. The guest blogger had ADHD when he was a child (rode the short bus like some of our kids do) and felt "retarded" for much of his younger years until he discovered his love for running. His accomplishments empowered him to feel good about himself and helped him get through high school. He finished university at the Master's level, became a teacher, and is now a principal of a high school in Ohio.

Excuse me, but WOW!!!!!!! It's not only inspiring to me as a mom but to me as a person! It's one of those stories that I'm going to have to print out and save in a Real-Life ADHD Stories Folder for my kids when they get older. (OOOH, now that's an idea.) I'm not sure Logan is ready to hear about his diagnosis yet but I can see that he knows that he has a hard time with certain things.

Stories like this will certainly ease the pain and will hopefully lift his spirits when he feels alone and "stupid." The fact that the guest blogger is a principal is also great since it's a role to which he can relate at an early age. Three cheers for ADHD role models! Now, I wonder how we can find some more...... I only know of Michael Phelps and Ty Pennington. Let me know if you have anymore names and stories. In the meantime, you might find John Elder Robison interesting. He has Asperger's and not ADHD but, I found his autobiography, Look Me in the Eye just as inspiring. I read it in just a few days and this slow-processing brain of mine can't say that about just any book.

Picture: There is no question: Logan loves to run. I think he was holding onto some dandelions in his pocket which he later gave to me. I hope he'll like track if and when he tries out. I was on the track team for a year in high school and gave new meaning to the word "last." I have a feeling he won't be the same. I did finally find my "thing." I loved writing and being co-president of the Asian club in high school. There were days when I went to school just so I could go to a club meeting.
Posted by Jenn at 9:02 PM

You'll be amazed what giving compliments to ADHD kids does for there self esteem. I am 31 and I have ADHD and to this day whenever I get a compliment it motivates more then you can imagine. People with ADHD and especially kids with it are lost when it comes to planning and organizing and doing the most simple stuff ( for example I need the flylady program to organize my household and when I say need I mean need). Because of the difficulties you have with concentration you feel insecure and demotivated most of the time and lost when it comes to figure out where to START when it comes to doing stuff.Not only is it helpful to have somebody there to remind of the steps that need to be taken (even if it might feel to you as if your reciting a pointless mantra), getting complements is vital because it helps you to motivate yourself. ADHD'ers like all people crave recognition but we get it the least because of our handicap. Giving your child compliments and rewards and being its cheerleader/coach through live is the most valuable gift you will ever be able to give your child ( if you're not convinced read Micheal Phelps mom's biography and see what it did for them) and I sincerely hope you continue. I can assure you that your task of raising these boys will be more rewarding than you can imagine now, because when your children are adults they will be the most grateful and loyal kids you can ever imagine having. Good luck!

I'm glad you found my story inspiring. Asperger's and ADHD often occur together, and they share some traits. The diagnoses are often confused in children, especially when they are high functioning.

Given that situation I am not surprised my story seemed relevant.

If you are curious, I also have a blog here and another on Psychology Today with different content. I'm also on FB and @johnrobison on Twitter

Thanks for writing this article, very inspiring :)

I have read through some of your blog. I followed it over from the support group we are both in. I am shocked~ I have a 7 year old with ADHD and a 6 year old with PDD. I am so glad to find you, so we can hopefully support each other :)

I have the same problem getting my son dressed on school mornings. I need him to get dressed, and quickly, before his medication takes effect. It is at least a 15 minute battle and it always ends with a house full of anger. Not the way to start the day. I will remember to find something, anything, to be positive about. I was once in communications -- can "spin" with the best of them. Such a simple idea but it needed saying. Thanks!

penny, I totally hear you on the spinning. I've done more "spinning" as a mom than I've ever done as a publicist!-jenn