Logan Needs His Own Blackberry 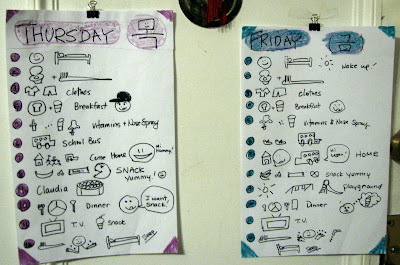 Once in a while, Logan and I have a doctor's appointment at where many New Yorkers call "the city." We are really referring to the island borough of Manhattan where most of the best shops, schools, restaurants, and doctors are located. The only people who don't refer to the borough of Manhattan as "the city" are residents of Manhattan.

Logan loves going to "the city," because it means he can take the subway. He is crazy about the subway. He has a map of the New York City Subway system and tries to memorize the stations we use and where the transfer stations are.

We had an appointment yesterday and the day started out great. He was on a train and had his mommy's full attention; a recipe for success. He listened to my every direction but then after the doctor's appointment, I lost him. He could barely walk with me. He either ran ahead or was way behind me. I couldn't decide whether to be worried or angry. He kept switching from being super annoying to endangering himself.

But remembering my last post about being positive, I tried very hard to stay calm. I did manage that but still, he was a mad man. I was able to see some reduced hyperactivity during lunch at a yummy gluten-free restaurant that we sometimes go to but it was so obvious that he needed something more because he was no longer able to self-regulate. I wish I had a sensory gym in my backpocket that I could blow up and use instantly. He could have really used a swing or a ball pit or something...

What can I do in the middle of one of the busiest streets in midtown Manhattan with a kid who can't walk a straight line even while holding my hand? Time out would be impossible and likely useless too.

Today, I happened to have a meeting with Spencer's therapists and I ended up talking about Logan's loss of control. They told me that the trip to the city was overstimulating and overwhelming to him. They suggested that I take him to a bathroom next time and give him some deep pressure hugs. I kind of tried that a little but I didn't go to the bathroom and instead I tried to give him deep proprioceptive input near the cash register at the Gap. It didn't work.

The therapists asked me if I had prepared Logan before going on the trip and I said no. Of course, why would I do something so basic and necessary like that? We are only shattering the routine of a child who needs routine second only to food and water. This is an area of parenting that I really need to fix. I'm sure it can alleviate anxiety - theirs and mine.

Anyway, they suggested making a picture schedule for both Spencer and Logan and while they gave me something for Spencer, they pointed me to a great site for more products that could help Logan organize himself. I looked it up and realized that I knew the founder/CEO of the company! I had completely forgotten about her company because I had met her before I had children and only knew that she had a child with special needs but knew nothing more than that. Can you believe I never even asked her?

I looked at her online store and was so happy to see all these things that can support behavior training. It further supports this thought I've been having about how ABA can help children with ADHD but I still have to do research on that. Please check out the site sometime, it's called Different Roads to Learning and the founder, Julie Azuma, has a daughter living with autism. She's also an advocate in issues involving children, women, and immigrants and was even named one of Inc. Magazine's 26 Most Fascinating Entrepeneurs. And in case you're wondering, I've already asked her for an interview for this blog and she's agreed. Stay tuned. If you have a specific question for her, send me an email and I'll try to ask it.

In her store, I found some really cool things for making Logan's new schedule but I'm going to try out a homemade version first to make sure I'm going in the right direction. So far, my tactic is to create a daily picture schedule and this should be complimented with a picture schedule notebook to help him stay on track on outings. Hopefully this will help him organize himself and make him feel more in control of his day. It's probably no different than what my blackberry is to me and if you know me, you know that my blackberry is an auxiliary part of my brain. I think I'll buy a red one for him and tell him it's his redberry. I think he'll like that because he knows how much I love my blackberry.

Picture: This is our new schedule. I put today's up as well as tomorrow's so he can see what lies ahead. I used a different color for each day and for fun, I wrote in some Korean even though he hasn't learned the Korean alphabet yet. Someday......
Posted by Jenn at 10:30 PM

Something I use with my son when we are in crowded situations is a waist belt. We both wear one with a tether going between them. It helps me when my hands need to be busy elsewhere. It helps him remember "where" mommy is without me having to continually nag him or physically hold him. And it helps keep him out of dangerous situations (or at least gives me a better heads up). It's the same system that we use with his service dog. An unexpected side effect: it helped calm some of his sensory issues because it provides continual stable sensory input.

I think this might help your child a lot. I have a more elaborate week schedule with every day planned and written out ( and then located in everyroom in the house and one on my laptop). It gives me so much peace of mind not having to figure out what I have to do on a day to day basis. This is one of the most overwhelming things for me as an ADHD'er because figuring out what to do and how to do it is often too much of a task. What usually happened is that instead you do nothing which leads to feeling guilty and bad. This is common with ADHD adults and kids are no different I guess.
I can definitely relate as well to getting overwhelmed when being in a very crowded area or space. I think the best way of describing what that feels like is that it's like feeling lost and empty literally. Of course with children when there is an adult present this situation is somewhat different but in every case the anxiety that an ADHD adult or child then faces stems from being taken out of a save and controllable environment. What I think might help is taking him aside when he's acting up and giving him a focus-point perhaps in the form of a task. For example if you're walking on a busy street and he's being loud tell him that in order to get to the right station its important for you two to count the amount of lanterns you see, so know when you've arrived at the right tube station. A simple challenge like that can make him hyperfocus on something so he can block out the million things going on around him. I hope this tip helps. I'm not in anyway trying to lecture you on what to do nor am I a specialist or a parent myself, but when I read your blog I recognize so much from my own childhood I feel the need to respond.

thanks consuela and kim! Kim, I can't possibly imagine doing a waist belt thing but I think I need a visual. Do you have a link you can post in the comments section. And Consuela, your comments are totally appreciated! I love to talk to adults with ADHD because they can talk about what our kids might have felt like because our kids can't always talk about their feelings accurately if at all. thanks to both of you!

It's easy to tell a mom she needs to do advance prep to reduce problem situations, it's MUCH harder to anticipate it at every turn. Some situations will be difficult no matter what you do. Be kind to yourself. You'd be excellent as an ordinary parent. Who gets training to be an extraordinary parent? No-one. Be kind to yourself and give yourself credit for all you are doing right, okay?

Hi Jenn, how are you? I enjoy reading your blog! Congrats on Logan's graduation! Have you ever been to the NYC Transit Museum? It's all about subways and I think Logan would love it!

I just had to tell ya your drawings are adorable!