A Perpetual State of Semi-Denial 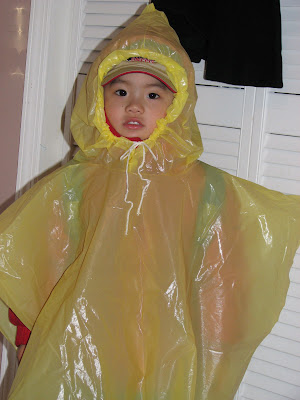 Spencer is doing very well these days. We still have our challenges but in general, we're happy that we've received therapy for him so early. However, despite the progress, I was still surprised when his behavioral therapists felt he was ready for potty-training and they warned that we shouldn't miss the boat when he's giving us the signs that he is ready to learn.

"OKAY! Let's go for it!" I said. We got the potty out and it took a long time but he finally did it and then he did it for a few days straight.

Then, I think I made a mistake. I think I should have just concentrated on this issue and really tried our best not to leave the house for about two weeks or so. However, life called and we needed to go out and so we put a diaper back on him and skipped the potty for a couple of days.

And then after we were settled back home again, we said, "Spencer go potty."

And no potty it was for several days and we tried and tried to get him to go back but nooooooo, no potty.

And then the strangest thing happened. He refused to urinate at all, not even in the diaper. I got so worried that I even called the doctor. This child clearly had to go but he would just hold it in. He would sway, dance, and do whatever he could to hold it in and he even whimpered in pain but still he would not pee.

The doctor said that if he didn't urinate in a 12 hour period, then I would have to take him to the emergency room. She suggested that I stop potty-training for now and that I should put him in a shallow bath and this might stimulate him to urinate.

"Okay, Spencer, let's go to the bath. " The minute he stepped in, he sprayed me across my shirt and I was sooooo relieved.

His therapists marked this behavior as a sign of anxiety and debated whether or not the potty should stay out of sight. Since he continued this behavior when the potty was in sight, our ABA lead therapist told us to put it away for a while. A day after we put it away, he stopped holding it in. No more anxiety for my 2 year old.

I don't know why I'm so nieve. I'm blogging about having 2 children with special needs and I'm still surprised at how much anxiety they can have at such an early age. Spencer is the child who pretty much starved himself last year and now he is holding in his urine to the point where it hurts and somehow I am still so surprised. What don't I get? Maybe I am in a perpetual state of semi-denial.

One thing that I am learning is that children's anxiety is rather mystical and I really need to pay more attention to this as a source of behavioral problems. (I also heard this from Kirk Martin- I really like his work! I can listen to those CDs over and over again.)

I guess the best thing I can do is show him that I can be relaxed but who am I kidding? My kids may have special needs but when it comes to me, they have x-ray vision. They probably know better than anyone else that I find it extremely difficult to relax.

Another funny thing happened as a result of this trial with the potty. The lead therapist had told me to read more on potty training and continue to read potty books with Spencer and so of course, the first thing I did was google "toilet training." Immediately, I was led to a parenting site and I realized that I hadn't looked at one of these parenting (for typical children) sites in probably a whole year. Wow.

I remember how much I searched through those sites whenever I had problems with Logan and how many times, I didn't get anywhere with the advice that was often prescribed. I must have looked up every possible problem they wrote about...... Breast feeding, Bottle Refusal, Hitting, Biting, Tantrums, Reading To Your Child, Sleeping, Pacifiers, and the list goes on. I wonder if I ever stumbled upon the lines, "if this doesn't work, your child may have a developmental delay. " I probably did and ignored it.

It's so hard to know what to do and now that I have stamped the "special needs" stamp on my kids, you would think it would be easier but it's really really not. I think I'm probably not in semi-denial but rather I'm just not that accepting the fact that I don't know everything and that I never will. I wonder who is more anxious, the one who refuses to pee or the one who needs to control just about everything. Sorry Spencer but Mommy wins this one.

P.S. I did find a special needs-potty training webpage. It was helpful.

P.P.S. (added 6.19.09) I found another book on special needs toilet training but I haven't read it yet but here it is the link.

Picture: Logan on his way to preschool #2 a couple of months before we finally sought professional help for his issues. Babycenter.com searches that month were likely: potty-training, is it too soon for nursery school?, aggression, discipline... I wonder if there is a topic entitled, "How to know if you are a bad parent?" I would have likely clicked on that first.
Posted by Jenn at 9:55 AM

Thanks for the link! DS will be four next week and every time we think he is getting the hang of potty-training, we have some sort of setback. GAAHHH!!! We'll get there one of these days. It's just the trip there that I loathe.

THANK YOU for the link!!!! We were already going to be taking his toilet seat, incentive toys, pullups, etc to OT tomorrow - I'll read everything in detail before we go so I can make a list of questions to ask.
Thank you!!!!

thanks for the comments autismomma and caesaria. Looking back at training Logan, all I can remember is that I started too early and that it took a long time because I don't believe I gave him enough reinforcers. I also think that the no-pants method is great because it helps those that wait until the last minute. Summer is a great time for that isn't it? Good luck. I'm going to need it too.

My dd's aide was very helpful with potty training her in preschool. She was a bit over 4 by time she got it. She's going on 8 and still not night time dry - ugh... Going gf/cf was one huge key cause I think it helped her "feel" the need to go. Both my olders are sensory seekers so pull ups were a joke (way too convenient to pee in).. The potty video (there are a bunch.. but my dd really loved this one)
http://www.amazon.com/Once-Upon-Potty-Him-DVD/dp/B0000CBLBC/ref=sr_1_5?ie=UTF8&s=dvd&qid=1245512385&sr=8-5
worked wonders along with the book.

I'm of the mind-set with any child, the more "pressure" they feel, the more resistant they become. I've been kind of shocked with my 2.5 yr old as he wanted to use the potty so we brought in his potty chair (even got out of hot tub to pee in grass, which I thought was pretty amazing)... but like you, with our longer days in town with therapy, we revert back to diapers and he's fine with that. At this point he doesnt want to wear big boy undies (or if he does he pees in them) so this has prevented us from moving to next place. When home he runs around naked and uses the potty seat appropriately. I think it'll still be many months tho til we move to a place where he's ready for more.. We'll see... Good luck!

My son often has anxiety issues around changes -- be it new situations, new locations, etc. I think that we as mothers (especially ones like us -- I am very Type A and it sounds like you are too) ... need to really slow down and think ahead about how the change can be best handled ahead of time. This is very difficult to do, of course, becuase life tends to get in the way! LOL

For instance, just today my son was starting swim lessons. I knew beforehand that I needed to take him but I convinced myself that the nanny and my daughter would be able to handle the situation. Nope. I had to drop everything that I was doing (work) and take him to the YMCA. I am now very glad that I did even though I now need to work late tonight ... but I think just accepting the fact that these things HAVE to be done .. is something that I need to fully acknowledge and just do.

Sorry for the rambling but I think it is difficult to juggle everything a lot of days. LOL