Vacation Is When Moms Go Back to School 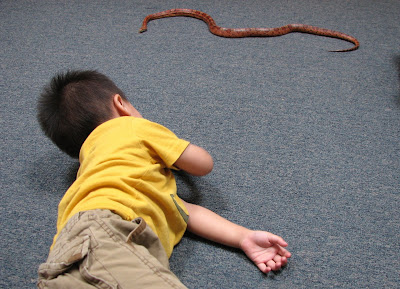 If you have been following this blog then you will know how I feel about school vacations. I kind of dread them. When it is over, I feel great relief. I know it's horrible to say but there is a lot of truth to it.

The vacations are hard because we are basically going out of routine and doing something new. With new things, the therapists in my children's lives say two things that sort of drive me crazy:

1- They can not stay in routine all the time. That is not life. You have to give them a chance to experience new things.

2- They become overstimulated very easily. You have to ease them into things. Talk to them about what will happen (days before if possible) and this will reduce anxiety and negative responses.

I have my screw-ups somewhere between 1 and 2.

We are only halfway into this vacation (Summer school for Logan starts next week) but already I've done a good deal of sweating and stressing.

1. On the day of Logan's last day of school, Spencer had no morning therapy sessions and so we went out for a walk. I had only my wallet and phone, no diapers, food.... nothing. I spontaneously called a friend nearby to see if she could do a playdate and she said yes! Hooray! I then tried to hop on the subway but Spencer started to panic. He clung to me the whole entire way there. I had to carry him up the stairs, hold him in the train, carry him from the train station to my friends house and aside from my friend's apartment, his feet did not touch the pavement until we were three blocks from my apartment. What in the world is this child afraid of? He had been on the subway before but he was always in a stroller. Would it have helped if I said, "Spencer, we are going to my friend's house and we are getting on the subway," one minute before we walked up the stairs to the subway? How can we be spontaneous without panic and dismay?

2. I was invited to a playdate with other children on a small trip to an animal/environmental center with both of my kids. I never go to any museum or center or any place without my husband. We each take one child and we always avoid sessions where teachers are asking children to sit and listen but since the petting of animals was involved, I figured I should give my kids the chance but boy WAS THAT HARD. Seriously, Spencer and Logan ARE the ADHD Brothers! It's not a joke anymore. If the boys were not actively engaged in touching an animal, they would just get up and walk away and look for something to touch or play with. Meanwhile I have to listen to others saying, "Please don't let him touch that," or "Oh no, stay here, don't leave the room."

3. I also took them to a park with the group and as soon as we got there, the group sat down to eat lunch. My kids went straight to the playground. They were not interested in food and Spencer was not keen on hanging out on the grass anyway. Okay, fine, don't eat... whatever... But then, there it was, the evil monster named Overstimulation, came and started dancing circles around me and my kids. Logan became more hyper than usual and would barely follow any adult direction. I could feel my face crinkling more and more as I tried to give my kids a chance to step out of routine and play in an unfamiliar but fun playground. Wasn't this the "good mom" thing to do?

And then it happened: while Spencer was trying to climb a water fountain (I was standing right next to him), I started yelling, "Logan, don't kick the ball that way. (at other children- not maliciously- but still) Bring back the ball...." And I turned around and saw Spencer's head diving straight to the ground. He was straddling the water fountain, lost his balance, and then fell, head first, pretty much in a complete vertical line. I almost died. I had an ice pack and started pressing it on to the bump on his head while he was screaming. And just to pour salt into my wounds, someone came up to me while Spencer was still crying his eyes out and told me that Logan had broken another child's toy. Oh NOOOOOO!!!!!!! I found the child's mom, apologized, and abruptly left my group.

I take full responsibility for what happened. I know I was supposed to have a little help with Logan at the group outing but still, I should have listened to my gut and my gut told me that I should not go to that park because I might not be able to keep both of them safe or at least in-line. I could have gone straight home after the animal-petting experience but I told myself that I should stop being such a party-pooper. But I should have been the pooper. Then I wouldn't worry the whole day about Spencer having a concussion.

Believe it or not, something good came out of the horrid park experience. When we left the park, I was a little surprised to hear Logan say, "Mom, I'm glad we are going home." So there it was... he knew the Overstimulation Monster was there too. He just doesn't know how to recognize it like I do. I told one of Spencer's therapists what Logan had said and she gave me a great piece of advice. She said I should talk to Logan about having felt this way and give the feeling a name. That way, when he's overstimulated again, he can recognize it, vocalize it, and get help before he gets to a point where we lose him and need leave the scene to bring him back to earth. I love this idea! I hope we can pull it off.

With all these little disasters that happen along the way, I guess there is a lot for me to learn during school vacations. I won't list them all except for my favorite one: My kids may be afraid of automatic toilets and water sprinklers but will have no problem sticking their naked little fingers in cages of birds and bunnies and even lay down next to a garden snake and have some fun. (pictured above with Spencer) They seriously like animals and have no fear at all. The ADHD Brothers are something else.
Posted by Jenn at 7:58 PM

Wow, your therapist gave you great advice. When my DS was younger he had such anger and frustration issues. The therapist said the place to start is to give a name to it. Describe what that emotion feels like: anger = red face, hand clenched in a fist, knot in stomach, feeling like lashing out . . . those kinds of things. DS did not recognize those physical signs as indications that he was angry. Once he learned that, then we moved on to learning appropriate ways to handle it (punching a pillow, writing what he's thinking, taking a walk . . . whatever tool he found would help him get back to a calm space.

My heart jumped into my throat when you described seeing Spencer falling. I can only imagine having two of my son to keep track of, and that is exactly what would happen if I did!! He's okay, I take it - no concussion? I don't think I would EVER have the guts to do that!
I'm not sure what the middle ground IS between #1 and #2 - the "they can't stay in routine all the time" versus "But you have to ease them into things." Those two sound contradictory.
Mine doesn't always get anxious at new things, but sometimes out of the blue (during something I would never expect to bother him) he'll be clinging and not moving. And the faster I need him to move or react, the slower he goes, until he's just frozen. If there were a fire, or some other reason we had to move QUICKLY, I would have to carry him, which isn't bad when he's 30 pounds, but could be a problem as he grows!
Your blog is very informative and helpful, since your children are both older than mine. It's like a window into what I'll have to keep in mind as mine grows up.

Jenn-- I can't be calm looking at that snake! (I have an unnatural phobia.) It is so great they do have things they enjoy without fear.

As hard as it is, I think you are doing the right thing. How will they ever learn how to behave at the playground or get used to the subway (which I would be a total basket case on, BTW), or be spontaneous if they aren't allowed to experience it and get used to it? The more you do these activities, the more they will get acclimated and begin to enjoy them and the more coping mechanisms and organizational tools you will learn to make the experiences successful and enjoyable.

I know it's hard. There are sometimes things I would just assume avoid than take my ADHD son to but I know he has to learn how to act in all situations. And the more I have learned about how to help him, the better he does. We rarely have a meltdown in public anymore (he is older than your boys a couple years though).

I am glad Logan is okay. Maybe one new experience per day would be good. =) You are such a go-getter.

You have to remember that taking them into situations where they may struggle is not failing them. You are actually helping them. I have to remind myself of this all the time.