Discipline for Mom: A Diet for Parents 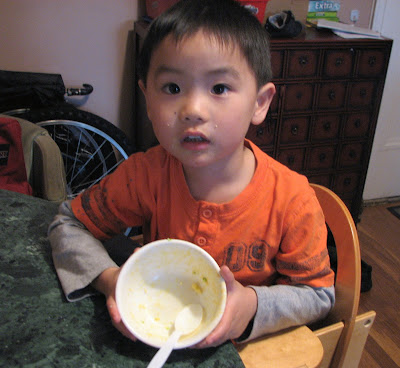 Before I got pregnant with Spencer, I used to have these feelings of shakiness and nervousness and I had no idea what they were. I had lived with them on and off for years but there was a period when it was happening to me every single day. I thought it was my coffee so I switched to having decaf with my bagel every morning but sure enough before it was noon, I would feel so sick that the only thing that made me feel better was to eat my lunch.

Luckily, I worked in a hospital and finally thought to ask an endocrinologist about my problem and she told me that it wasn't my coffee making me shaky. It was my bagel. A bagel has 45 grams of carbohydrates which is huge. I obviously was having trouble metabolizing it and so I sought help. My endocrinologist said that I was likely experiencing something called reactive hypoglycemia and that I should cut down or cut out carbs from my diet.

Can you tell a 2nd generation Korean American not to eat rice? A sociologist once told me that compared to other Asian American groups, Korean Americans are more likely to cling their parents' foods. It could be that we are addicted to spice. I don't know. All I knew was that I had tried a low-carb diet before and I failed to lose any weight because I love my dear friend Kimchi (pickled cabbage) and wherever you find Kimchi, you will likely find his partner-for-life, White Rice.

However, this time, my motivation was different. I didn't have to lose weight so much as avoid feeling so shaky and nervous because I could barely do my job. Nothing can beat the avoidance of suffering as a motivator. On top of that, I was very concerned that unchecked hypoglycemia could turn into diabetes.

The doctor assured me that being carb-free was safe and that I didn't even need to eat fruit. A trusted nutritionist I consulted also agreed. Still I was scared to try it but then after three days of being carb-free, those horrible symptoms vanished and then I started dropping pounds like crazy. I think I went from a size 12 to a size 8 in a 6-month span. The worst side effect was constipation of which I found a way to avoid.

This was by far the most successful diet that I had ever accomplished. Too bad the goal wasn't to lose weight. It was really just a big bonus because what I was really trying to do was just avoid those horrible symptoms which finally brings me to my point in this blog post: I am terrible at keeping myself motivated and pretty much need the threat of diabetes to make positive changes in my life. (another ADHD sign? whatever...) I noticed it recently since I've been given the chance to work out these days. The workouts have given me time to think about a lot of things including one of my biggest challenges: disciplining my children.

If you see on the right side of my blog, I have lots of ideas for disciplining children with ADHD. I have heard very kind comments but my very dirty secret is this: I can not stick to these "brilliant" ideas. To me, it's really like a diet. The first month of using it, it's an exciting breath of fresh air that is driven by the novelty of a great new idea that seems to work effortlessly. Then, like most diets, life takes over, your will power is challenged and many times you give up and just wane back and forth from your diet, constantly feeling guilt and shame.

This is how I feel about my disciplining my kids. It's not that I have abandoned the discipline practices that I've tried and liked in the past year but I find that I'm not using them as best as I can and so it is not as effective. I look at my quarter system and see that I haven't given him so many quarters lately and I look at my rules chart and see that I haven't followed through on praising Logan when they are observed and disciplining him when they are not. While I wouldn't call my house chaotic, it certainly lacks the order it needs.

So I decided to do a google search on how to stay on a diet to see how I can continue to stay motivated to work on these discipline tactics. It's so tough to admit this to you all especially since many of you have written compliments on some of the ideas I've shared in this blog but nothing works if you are not honest, right? I'm sorry if I've misled you to think that I'm a consistent disciplinarian. I am a far cry from that. While I wouldn't give myself a "C," I would definitely not give myself an "A" here. However, I do want an "A," and that is why I feel so bad and still stress out.

I found a page on About.com about sticking to diets and thought some of the points could be translated into my life to stay consistent with disciplining:

1- Choose the Best Diet That is Right for You = I think I see now that I don't need lots of good ideas. I just need create one plan that works for me, my children, and my husband. I am going to have to talk it over with Kai and ask him which tactics work for him. Maybe if he gives his two cents, it will help me get him back into the groove of things as I try to do the same.

2- Set Realistic Goals = I seldom do this with disciplining but when I do, I feel accomplished and I think Logan does too. I think I have to pick a couple of behaviors that I dislike and work on those. This way, it'll be easier for me to praise him when he is showing the appropriate behavior instead of me feeling like I need to be praising all appropriate behaviors as many times as possible. I think it's too overwhelming for me. Also NOTE TO SELF: Ask husband to set the goals with me - do not forget. 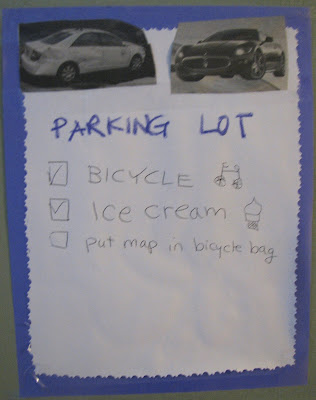 3- Keep Reminders Around = I have done this in the past: an ad campaign in my own house. It's crazy but it does help me. I will write notes (with graphics) to me and Kai in different colors in different rooms and I can make the ads Logan-friendly. Thus, while one ad might read: "Use Nice Words," to Logan, he'll think that the message could mean, "don't say mean things." To me, I'll remember it as a reminder to praise good behavior. I also like to have pictures of good behavior displayed in the rooms where he is most challenged. I like to think that it reminds both me and Logan that good behavior can be achieved. (Also, snapping a photo of good behavior is another form of praise. Logan loves it.)

4- Use the Right Tools = I have one friend that uses her ABA data to figure out what kind of impact the gluten free diet has on her child. I should do something similar for both my children's diet changes and changes made in behavior training tactics. I suppose it might be as simple as counting how many times he's exhibited the desired behavior since starting a new approach. If the numbers increase gradually as I stay consistent on the tactic, that will prove that the tactic is working and that is another motivator.

5-Be Good to Yourself = I have to find ways to congratulate myself if I have accomplished something. It might be another motivator to keep doing what works like being given a bonus on the job if you did well. I should also stop beating myself up for falling off my discipline wagon.

(Picture 1: One of my early "photograph to praise good behavior" photos of Logan because I had such trouble getting him to eat his dinner. Picture 2: This is a newer photo of my parking lot idea. I think it helps to have nice graphics when communicating with your child so I cut out photos of cars and pasted them onto my preschooler-appropriate To-Do List. It still helps me a lot. )
Posted by Jenn at 12:02 PM

Good luck Jenn! Leave it to you to find a link between staying on a diet and disciplining our children - brilliant and very creative! I can relate wholeheartedly with the personal motivation factor - I thrive on deadlines/pressure. Keep up the workouts! I think finding what works is key too (for the discipline). I am much more willing to stick with something when I see actual positive results.

I have the same problem too. I think it's called being human, being a mom, being a perfectionist. We want to accomplish so many things, try so many new things, do everything everyone suggests, and all with grand success. I have half-completed and abandoned ADHD ideas piled to my chin. I just can't do it all. And trying to do it all makes me too tired to follow through on any of it.

We are still doing the quarter chart for chores. My son refuses to do his chore (setting the table) though and by dinner, I am too exhausted to enforce it. His sister is doing well with hers.

You are great with visual reminders for your son. I find myself planning them but never doing them. One more project for my list...

We all love your ideas. I bet someone in this blog-o-sphere benefits from your ideas even if you don't have success with one.