Taking a Vow of "Near-Silence"


I think I should go on vacation more often because it seems I am quite terrible at getting back to life after I return. Since my last post where I was clearly at an all-time low, I have slowly been returning to some semblance of normalcy. To my great fortune, I have had some comments and emails from kind souls trying to help pull me back to the surface. Thank you to everyone for your well wishes. . I must have sounded pretty down. I hate to send out such negative energy and I apologize for that.

It hasn't been easy, but I do feel like I'm moving forward. My first step was to improve my health. That horrible medicine gave me major gastro-distress and migraines that lasted days after taking that one and only pill. Whenever I feel like this, pill or not pill-related, I pay a visit to my acupuncturist because I feel like my chi (energy) is blocked. I used to go to her at least once a week and stopped doing so only because I decided to direct more of my time and limited funds to treating my anxiety-related breathing problems. It's funny that I'm back to her to treat me for my attempts to get better without her.

After spending an hour on her table, I felt so much better. How do those needles work!?!?!? I finally feel better and now that my migraines have passed, I can use that brain power to think about how to conquer my stress and anxiety.

A friend wrote to me after reading my latest blog post and said that even though her previous use of anti-anxiety medications had some very undesirable side effects, she would still use them if she had to go back and do it all over again. She also told me that she knew many moms with special needs kids that are on some kind of medication. Sad as it was, her words were comforting as I often feel embarrassed for not being strong enough.

More to the point, I really needed to hear her talk about medication since I am back to having trouble breathing again. Even though I know I need to figure out some long-term solutions to relieve anxiety like dieting and yoga, I am still wondering if a short-term solution like medication could help if I found the right drug and dose. I knew this wasn't going to be easy but I didn't realize it would be this hard. I'm going to see my neurologist again soon and I'll ask him for advice. With the exception of him, no one thinks I have ADHD but the ADHD meds seem to help the anxiety best. My internist is strongly against me seeing a neurologist and doesn't want to turn me into a "guinea pig." I do feel like that sometimes but I think he is misguided in that he doesn't believe neurologists can help. Another friend also suggested I see a psycho-pharmacologist. Wow, who knew such a person existed! I wonder if they take insurance. That's always the bottomline. 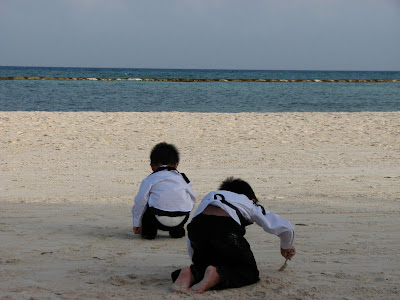 For now, I think I have found one possible long-term solution to living with less stress. I am going to try shutting up more. I am not sure where I got the idea. It really came from several sources. First, I have been looking towards Asia these days and finding much comfort. Even though I'm American, I was born in Korea and Korea will always be a huge part of me. I have been using Asian methods like acupuncture to help me recover and I have found my love of Korean dramas to be an extremely joyful escape. (Really, they are very good. Just ask the Thais, Chinese, and Japanese what they think.) Lastly, I have been thinking of Buddhist monks and how they are so at peace with their silence.

I used to live near a small mountainside temple in Southern Seoul after I graduated from college. Believe it or not, it is possible to live near a mountain in one of the most crowded cities of the world. It's quite amazing actually. In 20 minutes, I would pass skyscrapers and pull myself up a mountainside and get in so deep that I could neither see nor hear the busy city streets. That is Korea.

I really needed that mountainside temple because the three years I spent studying Korean history in Korea were some of the most trying years of my life. The toughest part was being lonely as I had little friends and family there. However, I found solace when I would visit a Buddhist temple and pray to Buddha to grant my wishes. It was very comforting just to sit there in the one place where silence brought you strength and surprisingly made me feel less lonely.

Thus I was thinking that I should ease my stress by being more "Buddha-like" and limiting my words. A recent commenter, David, told me to consider being more spiritual, which is always a good idea to me. I also had a meeting with Spencer's therapists yesterday and they suggested that I can improve Spencer's behavior and actually get him to talk more by using less words myself. Yes, that is right, if I shut my mouth, he'll talk more. Apparently, the therapists say that Spencer does now have the language now but is reluctant to use it. (Maybe I am doing all the talking for him..... hmmm)

Perhaps trying to talk less can be both a behavior tool as well as a stress management tool for moms.... I'm going to test it out more to see but in the meantime, without looking for it(karma), I found this site today that really spoke to the advantages of being silent. It was a really great read. While I can not totally be silent, I am going to definitely try to use less words. I have a feeling it is going to do me a lot of good.

Again, thanks to all of you who have tried to pull me out of my misery. I can happily report that my fog is beginning to clear and am returning to my old stressed-out self.

Video: My therapist took a video of me using the method of not talking to get Spencer to use more voluntary speech. I recorded it to show my husband instead of demonstrating it to him in person. You can say that it follows my vow of near-silence.

Picture: One of my favorite vacation photos: the boys play in the sand during the wedding reception on the beach. (An SPD sand play victory for Spencer!) I wonder if the better the vacation, the more worse an ensuing depression can be.
Posted by Jenn at 11:47 AM

I love that photo!

I am so glad that you are starting to feel better.

I don't know about a vow of "near silence" but I do know that even 15minutes of silence focused on breathing always makes me feel better. When I am stressed, anxious or sad, I try to go outside, if possible, sit quietly, breathe and fill my soul and heart with gratitude and faith that everything is going to work out.

Good luck with your new approach -- it just may help!

Have a great weekend.