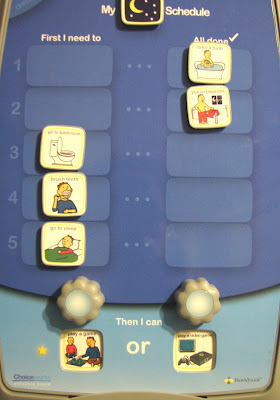 I remember the day I had a psychologist come to my house to evaluate Spencer. At the time, he was about 20 months old and wasn't getting much out of speech therapy because he was too distracted to follow any directions. His speech therapist had an ABA therapist come to observe Spencer and the therapist said that ABA would benefit him.

Everyone thought he would have a hard time getting the ABA therapy because kids without an autism or PDD diagnosis do not usually get it here in New York. However, the psychologist that came to my house that day to test him, asked me a series of questions and within an hour she told me that Spencer had PDD-NOS, shut her laptop computer, and walked out of my apartment. I felt like I was hit by an truck. Doesn't she know that you just can't talk to people like that?

I went to the bathroom and wept.

And then I was angry - angry because he "got a diagnosis" and angry because that psychologist gave me the diagnosis like she was telling me I had a sinus infection. I hate when people are like that because I have to waste my time getting pissed off at them before I could refocus on the more important issue.

PDD-NOS? My Spencer? I couldn't believe it but then I was re-educated by my social worker who told me that a diagnosis of PDD-NOS at Spencer's age was very plausible. This is because a child with ADHD at age three can be diagnosed with PDD-NOS at that time since you can not diagnose a 3-year-old with ADHD.

This is why I always call Spencer and Logan the ADHD brothers because I have a feeling that Spencer will eventually end up with the same ADHD combined-type diagnosis as Logan. I suppose I can also easily call them the PDD brothers because at this point, I am certain that if Logan was evaluated at age 20 months then he would have gotten the same PDD diagnosis.

After swallowing the sadness, I talked to my good friend Sue, another special needs mom. She told me that despite whether or not the diagnosis was correct, I should be glad that Spencer got the diagnosis because it was going to be so much easier to get him ABA therapy from the city. I guess special needs moms always think in terms of what kind of battle they'll have to have once they set their mind on something they need for their child.

I had great hopes for ABA therapy and I was right to dream big because soon after he started ABA therapy, Spencer's vocabulary of five words seemed to jump to fifty within a blink of an eye. I know I'm exaggerating but really everyone was amazed at his progress.

I also have to say that ABA has not just changed Spencer's life but it has also changed Logan's and mine as well. Before ABA, my tools for Logan's behavior modification at home consisted of charts, praise, and time-out but now I had more. I still don't know enough about ABA so it's hard to explain the difference to you except to say that having ABA trained therapists in the house, I was able to gain some excellent feedback on how to work on Logan's behavior. They are all about small steps, positive reinforcement, promoting social skills, and using less words when appropriate. However, the biggest thing I learned from ABA therapy is that you are looking at the issues from their eyes and that always leads me to slow down. I find that I get more results that way. I wish I had more patience to think from this perspective.

For example, I used a reward system for Logan in the form of tokens but it didn't really work and so we started using quarters. However, my child had no idea how much money he had because it was hidden inside a piggy bank so really the only reward was likely the joy of putting coins in a plastic pig. From an ABA perspective, I learned that he would be more motivated if I put all the quarters up on the wall so that he could see them, know how much he had, and it helped him figure out how close he was to getting what he wanted. You can say I was "dumbing it down" somewhat but I get a lot more results this way and really, what else matters more than results?

I remember the first time someone mentioned providing ABA therapy to Logan. It was an occupational therapist who was having an extraordinarily difficult time getting him to follow instructions. I asked the school system about it and was flatly told there was no way he'd get the services. He just didn't qualify because he had ADHD and not Autism. While I know that children with ADHD do not have as many delays as children with autism do, I think it's safe to say that at least we should talk about ABA being potentially helpful for children with ADHD, at least when they are young. *

So much can happen when they are young. I frequently tell others if you compare Spencer's skills with Logan skills at the age when Spencer started receiving ABA therapy, you will see that Spencer was behind Logan. However, now that Spencer has had ABA therapy, if you compare their skills at the same age now, Spencer is ahead of Logan for the most part. It's really amazing. I wish I had the energy and brain power to do more research and really map out Logan's progress like Spencer's therapists do for him but for now, I'm just going to go with what little I know because it's proving to be very helpful.

OOOH! Almost forgot! There is a big giveaway for another ABA tool. One of the coolest timers you'll ever see. It's on my friend Hartley's blog.

Picture: This ABA tool is so awesome! All this time I have been writing down To-Do lists for Logan but this was not all that practical because days could change requiring me to make a new list and he had no investment in making the schedule. With this product, we look at things in small steps which helps with his organizational skills and he and I can build the list together. I am also remembering from my ABA therapists how to create a good schedule, especially in the beginning. Activity, Activity, and then Preferred Activity as Reinforcer.... etc. I never thought about making a schedule that way but it makes sense.

I thought I was going a bit backwards by using this but this Choiceworks tool has proven to be more challenging for Logan than my To-Do List. Now I'm thinking that the To-Do list I had made for him was actually not helping his organizational skills at all. Maybe all it really did was help him know what was expected of him that day. I suppose it didn't really teach him the skill of figuring out what to do on his own. This tool looks like it can help him learn to make good choices.... perhaps that is why they call it Choiceworks. It really capitalizes on Logan's visual learning strengths which makes learning fun. (I think a core ABA principle is to capitalize on strengths. Please tell me if I'm wrong.) This product works on other skills like how to work out emotions and what a kid can do while he's waiting for something.

* I want to point out an interesting post written by John Elder Robison that really resonated with me because many people seem to think Logan has an easier time because he's verbal and is bright but I hate to say this, I do see him unhappy and angry on a daily basis. It seems more apparent these days as he increasingly tries but does not succeed in making friends.
Posted by Jenn at 1:37 AM

Could you give us a couple of sentences on what ABA Therapy is? I could go do some research but its going to end up on my to-do list which is about 5 miles long!

I am sooo glad the therapy is working and helping!

ABA Therapy is Applied Behavioral Analysis. It is the only "therapy" that has been scientifically proven to help children on the spectrum increase skills that might not otherwise be attainable. A large percent of the time ABA is used to increase verbal skills in children with little or no language. An example would be that most kids start with the part of language we call "mand" which is just asking for something. I want a cookie, so I say "cookie" and then I get it. Learning to use the word "cookie" as a different part of speech--like pointing to a cookie in a photo and knowing to call it the same thing is hard for kids on the spectrum to infer.
In order to help, an ABA therapist would put together a lesson plan designed to increase the opportunities for the child to use the word (any word) and for him to be rewarded when he does so. It is a "no fail" system where the child consistently is supported so that he gets the right answer each time.
This type of therapy is one of the few that is covered by insurance (although not all) and is often very intensive from an early age with a child doing hours upon hours of it daily.
I hope that helps, but I would encourage you to put it on your "to do" check list for the future. It is really facinating!
Hartley
hartleysboys.blogspot.com

hartley,
thanks so much for writing the definition. i find it so hard to define because I don't understand it all myself. all i can say is that it's done wonders for spencer in areas of communication and following directions. thanks also to karen for asking this important question. I hope more parents with adhd children look into it. i can see it helping young children with adhd if only we could get our children to qualify for it.

Thank you for taking the time to write about your experience with ABA Therapy. I've been searching for answers and you've answered a few. Keep writing, it's your gift to the world. You never know who will be blessed by it.
molly_dominguez@email.com
Thanks.

Great information thanks a lot for the detailed article.I really appreciate sharing this great post. Keep up your work.Excellent post.