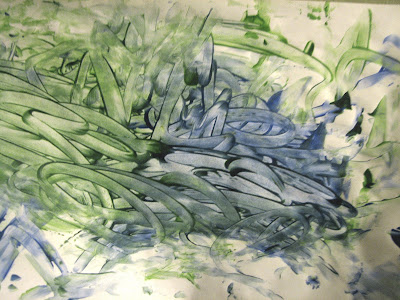 This week, I witnessed something more miraculous than my child's first steps.

This week, my Spencer, 2 yrs. old, went under the sprinklers for the first time in his life.

If you have read about Spencer's sensory issues in this blog, then you would know that he abhors water being sprayed in his face. Over a hundred people have seen the video of him screaming as I tried to gently spray him with my bathroom showerhead. I felt like I was torturing him.

However, this week, I learned how valuable sensory therapy can be and how anxiety is so intertwined with sensory processing disorder that it is very difficult to tell which is the bigger problem. I guess that is always the hugest question for me when it comes to my kids. Is it sensory or is it behavior?

In Spencer's case, at least for his avoidance of fingerpaint and similar substances on his fingers, his occupational therapist had no trouble discerning that indeed Spencer's avoidance of paint on his fingers was mostly behavioral with sensory processing dysfunction as only a small root of the issue. Thus, he worked with Spencer daily for the past few days and slowly Spencer showed improvement.

My occupational therapist is a big guy. However, you would see that he is so gentle with Spencer as he gets Spencer to get his fingers dirty with paint. They moved quickly but he took everything step-by-step. First, he let Spencer take the paint from a familiar object like a paintbrush, then the therapist's own finger and my finger, and finally from a palette. With each advanced step, they took turns to make a mark on the paper. As they got deeper into it, the therapy became more task-oriented, like coloring inside a square instead of making random marks. My occupational therapist is really awesome.

However, that same week, we went to the playground as usual but only this time, I caught him staring at the sprinkler. I slowly went up to the sprinkler and stuck one hand out to catch a light sprinkle like a nervous child would. I knew that if I jumped right in, it would have upset Spencer.

Then I saw Spencer take off his shoes and stand closer to the sprinklers. I followed suit and we were both barefoot. Then Spencer came closer and let the water hit his shorts, then his shirt and then he stuck his hands out to touch the water.

I couldn't believe what I was seeing. I can't compare it to anything. When you see your child walk for the first time, it's never that huge of a surprise because they will usually cruise around for a bit before the main event. However, with the sprinkler, Spencer went from 0 to 60 in just ten minutes! Soon, I was throwing toys under the sprinkler for him to fetch and he'd get them all! Sometimes, he let the sprinkles hit his head and even though he winced, he still managed to fetch the toys! To really blow me over, I stuck my tongue out to catch some water and spit it out and he actually copied me! He loves to spit. I know it's not good to encourage that but still.....

I know I probably looked like a crazy woman by the sprinkler. Who throws shoes and toys under the sprinkler and tells her kid to go get it? What mother even hangs out and gets drenched while trying to entice her kid to get wet? No one could possibly know the state of bliss I was in while looking like a total fool.

What could have started this? How could this have happened in just one day? Spencer's therapist and I believe it was the fingerpaint therapy that did it. To be sure, even the next morning with more fingerpaint therapy, he stopped using just one finger and flat out got both hands messy as he smeared paint all over the paper with his palms. Two miracles in two days. I was floored. My therapist was beside himself too.

I know I have written about sensory therapy before but I am even more convinced of its effectiveness in treating my child. I don't know why but somehow he was able to generalize his accomplishments in one area and apply it to another area of sensory processing difficulty. You could say he even de-generalized his sensory-based anxiety. I never knew he was even generalizing it in the first place! Is that what they mean by Generalized Anxiety Disorder?I always thought he didn't or couldn't connect his defensiveness against sand or paint with his refusal to have his face sprayed with water but here he was, practically singing from the mountaintop, showing me how wrong I was.

I have never been so glad to be so wrong.

Now if only I could do something about those haircuts where Spencer would scream so loud, you would think I was pulling out his hair rather than cutting it.

Photo: To a typical mom of a typical child, this picture is no big deal but to me, it is monumental. I would show you sprinkler pictures but I was too happy and too frightened to ruin the moment by taking a picture.

P.S. In case you were wondering.... My new preferred finger paint is Sargent: washable and yet very colorful. I really like it. The price was not bad either.
Posted by Jenn at 8:59 PM

That is awesome! Way to go Spencer!

I am elated in the changes that have come from occupational therapy for my ADHD and slightly SPD son. And we have a wonderful, wonderful therapist too. I am so excited about the difference it makes and feel so great every time we go there, I want to ask them if I can work there too. They change so many kids' lives.

So glad to hear Spencer is coming out of his shell. Thanks for sharing this great story of accomplishment.

Umm...what mother does that-- all you described?? I do!!! I was the mom soaking herself to show Mateo that it was okay! I was the mom that is/was super- excited that he reached out to touch the water himself! Yay!

Yahoooo Spencer!! What a wonderful little guy!
And what a great therapist!

Allright!!! Positively celebrate your progress -- feel it in every cell of your body. Laugh, jump and dance. This is terrific.

Wonderful! We are so thrilled to hear of positive progress! There is nothing more exciting than seeing another "first".