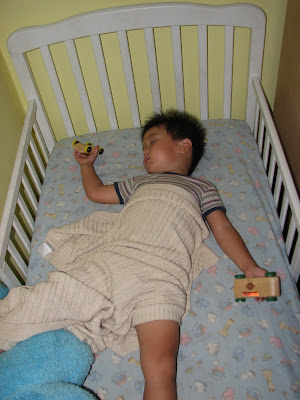 I often hear about friends who have put their 2nd child in their older child's bedroom while they were still infants! For me, I just couldn't imagine Spencer sleeping in anyone's room but mine. It's not because I didn't believe Spencer could sleep in a room without me. Rather, because we only had 2 bedrooms and Spencer often woke up in the middle of the night, I didn't want Logan to be disturbed. I imagined having two boys up at 2 AM, laughing or yelling at each other and me spending the entire night trying to get them back to sleep.

Spencer is now 2 1/2 years old and so I thought it was about time he moved out despite my fears. Additionally, I was like a homeless person in my own home. Depending on whoever needed me or if a mosquito was in a particular room, I would either sleep in Logan's bed or on the living room couch or on own bed. I spent the least amount of time in my own room because I knew that if Spencer woke up in the middle of the night, he was more likely to fall asleep faster if I was nowhere to be seen.

The equation for Spencer to fall sleep is simple. He needs to have his own bed and there can be no one else in the room, especially me. This past weekend, we finally sent him packing. Thanks to his therapists who gave me guidance prior to the move, we had a smooth transition. 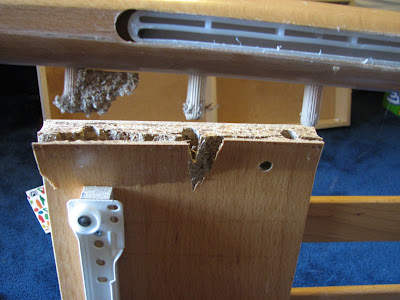 Here are some ideas we came up with:

1. "DO NOT GET A BUNK BED," said Spencer's therapists. Bunk beds don't work for kids who don't fully appreciate danger like the ADHD brothers. I knew they were right but I had a little bit of a hard time accepting it. My denial comes in unexpected increments. If you saw how small Logan's room was you wouldn't blame me. We felt that a bunk bed was our only option but I realized that if we bought one then I'd be on high alert all the time and I certainly don't need that. When I told Kai how the therapists were against the bunk bed idea, he told me to tell them to get us a bigger apartment. My husband is really crazy sometimes.

2. Talk to Spencer before it happens: This seems to be a recurring theme in our house. I am starting to live by these principles more and more. It really decreases anxiety for everyone. We set up the toddler bed a week before the move and so he was able to see it and identify that it was his. We also verbally told him that soon he will be sleeping in his bed. The toddler bed presence gave Logan some time to adjust as well.

3. I put a picture of Logan and a picture of Spencer on the door of Logan's bedroom to further tell him that this will now be his room too. I think this style of communication speaks more clearly than any spoken words. I think this is part of ABA philosophy. It also supports my vow of near-silence.

4. We asked the boys to help bring the crib mattress out of the master bedroom and into the boys' bedroom. Investment has got to help, right?

5. Integrate the boys' bedtime ritual: We used to put one kid down at a time but we started doing it together before the move date.

6. The trick is that Logan needs to be incredibly tired for this to all work. He has been getting a sleep aid for many months now. None of us can live without it and the quietness in the room allows Spencer to fall asleep in peace.

7. Logan still needs his own space so we put a safety gate on my bedroom entrance to give him a place to play without Spencer bothering him. It also gives me a way to separate them when I need to.

It wasn't totally a smooth transition. Spencer does freak out a little by the actual bedtime. We ignore it and he eventually falls asleep. Additionally, I have to teach Logan not to bother Spencer if he wakes up before him. I'll probably give him a quarter for his quarter chart for morning he doesn't wake him.

What I didn't expect was the move had more impact on us then it did them. My husband and I felt like teenagers whose parents had left town for the night. We got our room back! I didn't realize that for me, the master bedroom was nothing more than a closet. I did almost nothing in that room. Now that we got it back, it almost felt like we had another room added to our apartment. I sleep so much better now as well. I don't know how old my mattress is but it sure feels better than the couch!

Kai is the biggest kid of all. After Spencer falls asleep, he hangs out in our bedroom adding songs to his playlist on imeem.com. I don't know how this is fun but he's certainly finding means to enjoy his newfound privacy. Either way, it's nice to report some good news for a change. I am sure that getting Spencer to sleep for naps during the weekdays will be a struggle but I'm not worried about it. Hey, I think I just sounded calm just now!

Picture 1: Spencer's first night in a new bed sharing a room with his brother. To fall asleep, he likes to hold cars like the Automoblox that his brother bought with his earned behavior reward: cash. Note to self: Do not let Spencer sleep with Logan's cars as Logan will wake Spencer up in the morning trying to get them back.

Picture 2: Note to self #2: Talk to friends about reusing hand-me-down cribs and periodically checking crib sturdiness if they have hyperactive kids. This crib could have broken at anytime and we only realized how poor the condition was when we took it apart to throw it away.
Posted by Jenn at 12:01 AM

You have achieved a terrific milestone! Congratulations ... and to have your own room back too ... priceless :-)

I am loving this! Achievement and calm...what more could a mom ask for (don't answer that, there's always something)? Looking forward to stories of the brothers scheming together in their bedroom! =)