Brain Cyst or Vaginal Pimple? Which Has Greater Impact? 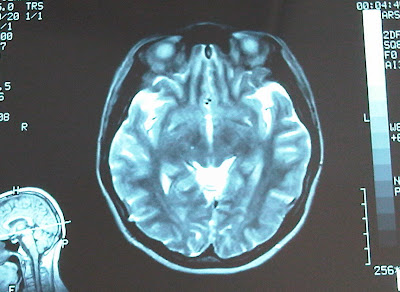 After I gave up on my 2nd psychiatrist, I consulted a neurologist that supposedly specialized in anxiety and ADHD. I figured I would try him out since I was able to just get away with paying a co-pay and after our first meeting, he ordered a routine MRI and EEG. I was annoyed because that meant more babysitting bills but otherwise, I thought nothing of it until the results came back that I had a tiny cyst somewhere inside my brain.

Yes. I have something in my brain that doesn't belong there. But after getting another MRI, I expected that my neurologist would tell me it's nothing to worry about as according to him, women develop cysts everywhere and they may never know about it throughout their whole lives.

However, when I got my results back, he told me to see a neurosurgeon because it was pushing against a sensitive spot. Great.

All I could do was sigh. I tried not to be nervous and luckily I really didn't stress over it because the whole thought of me having to have brain surgery was just completely unimaginable. I have other battles that occupy me everyday.

I called a very kind neurosurgeon I had worked with in the past, Howard Weiner, whose magical hands save the lives of children with intractable epilepsy and brain cancer. He referred me to someone and that doctor said I didn't have to worry at all. No surgery for me. Hooray!

But, there is always a but. The weekend before my neurosurgery consultation, I felt a terrible pain around my vagina. Really, you will never hear me talking about my vagina in this blog but I do have a point to this story. I found a pimple down there and it hurt like hell!!! By evening and the next day after finding it, I couldn't even walk. Luckily I was able to get an appointment with a gynecologist right after I saw the neurosurgeon who told me he didn't have to go into my brain and cut something out. Who has days like this!!!!!?????? 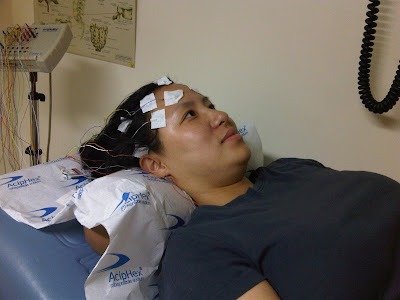 The gynecologist found two "lesions" which was apparently unusual. I asked if he was concerned if I had herpes and he said that we'd have to see. Soon, I was screaming in pain when he took a sample from the area. What a day! You just have to laugh, right?

I then started to think.

It was clear that I was not doing a good job in managing these things and that my neglect could be comprising my health, not to mention the children's health.

I had to wait for a whole week to get the results back and unlike the brain cyst, the vaginal pimple scared me. I've never had a sexually transmitted disease but it's so much more real than a brain cyst. Luckily, everything was fine. It was just a pimple. No herpes. PHEW!

In the meantime, I scheduled all of our dental appointments, including my husband's, my next medical check-up, and tried to figure out if I should be checking else out like the kid's hearing, allergies, and my occasional skin problems. I put all of it in my Microsoft Outlook calendar to get reminders. I even became proactive and just scheduled my husband's dental appointment without asking him. I decided to stop nagging him to take care of himself. There is no point. It's like asking him what he wants for dinner. He never knows and will eat what I make for him.

So there it is. Thanks to a hysterically painful vaginal pimple, I remembered how important it was to take care of myself and be organized about check-ups. I have a Blackberry connected to my Outlook now so I have no more excuses. The pimple also reminded me that I must shower more. To be honest, every so often, I skip a day because I "feel" like I don't have the time but that is just a bad habit that I will indeed correct.

Picture 1: That big white spot on my MRI is not supposed to be that big but my surgeon is not worried and neither am I.

Picture 2: This EEG was incredibly difficult because I was asked to close my eyes and lie still for 20 minutes and it was just too hard! I had to pinch myself to stay still. When they ask me to take deep breaths consecutively for at least three minutes, I was about to have a nervous breakdown.
Posted by Jenn at 11:03 AM

OMG Jenn! What a time you are having!

It seems that we as moms, let alone special needs moms, constantly put ourselves last.

Please don't let my mom read this or she will immediately call me and ask when my next pap/dentist/check up is, and I don't want to hear her nag me when I tell her that I haven't scheduled them in three years. Ugh.

Better get on the phone,
Hartley
hartleysboys.blogspot.com

Jenn,
Thank you for your post. I am so sorry that you have been dealing with these things - on top of everyday things. I'm really glad you followed up w. the doctors. Sounds like good news. I've been putting off doctors for 2 or 3 yrs. or should I say distracted from them. I'll get on it now. Thanks for the reminder and sharing your story. There is no WAY I could sit still for 20 min. Way to go!!! That is an amazing feat, take it from a fellow adhder!
KCT

Oh my GOSH. The pimple is nothing serious, right, just reallyreallyultra painful? And the cysts/lesions are supposed to be nothing as well?
That's a heck of a lot of nothing. I hope it all STAYS nothing.
I can't imagine sitting PERFECTLY still for twenty minutes. I would jerk or something.

omigosh. i am a terrible writer. i forgot to write that my tests for the pimple came out fine. they were just pimples. very painful pimples!!!! but i'm okay. thanks for caring everyone.

I just had one of those incidents that shows how we take care of everyone else before ourselves. Last Tuesday night I woke up with horrible abdominal pain. When it hadn't let up--7 hours later!--I decided I needed to see a doctor. Rather than have my husband drive me--he'd have to wake up the kids, tell Aaron, drag Natalie along--I drove myself to the ER! I was in surgery to remove my gallbladder a few hours later! Not a smart decision to drive, but the kids needs always come first, right?

On the subject of husbands, mine is well above average in helping with parenting and household stuff. But...yes, Jenn, there is always a but...his work comes first, so I had to return to taking care of the kids and household stuff way before I was ready. I stopped taking pain meds the second day I was home from the hospital because I thought I nee
ded to drive Aaron somewhere that night.

Jenn, I sincerely hope you are well!