Can Mom Be Awake? Summer is Over 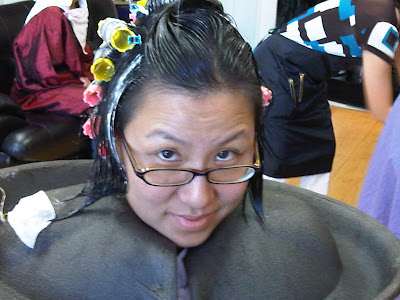 I can't believe how lazy I've been. It's crazy that I only had four posts in August! Where have I been? Have I relaxed myself to the point where I can no longer stand up? Is that what I was? Relaxed? I had to think about this for a while and here is what I came up with:

Reason #1:
I am more calm these days. Since checking myself into the ER with a panic attack 11 months ago, I think I may have finally found a medication that helps me stay calm. It's not perfect but it helps a lot and while it does have some side effects, I think I can live with them for now. It definitely beats not breathing well. No more big psychiatry bills! (At least for now... knock on wood)

Reason #2:
I went back to acupuncture. Why do I discontinue the things that help me? Why do I feel guilty about spending money on myself? It's ridiculous I know. My acupuncturist doesn't even charge that much but when I'm not feeling so great, I now don't hesitate so much to see her. I even brought Logan with me one day. She was so incredibly nice to him even though he's such a busy person.

Reason #3:
I am trying harder to accept the things that I can not control. I think when I started the GFCF diet and started looking for schools for Logan and Spencer, I was worried about two things:

(1) I don't want to make a mistake. Isn't this silly? I am trying to accept that nothing is guaranteed. There are so many things that I worry about at the beginning of school and it makes no sense. BTW, I want to point out my friend's prayer for school page (not prayer in school). It's a great post. I think prayer finds calm too. I should try to do that again.

(2) When choosing new therapies like the osteo-manipulative medicine I am doing right now for Logan, I am not hovering and watching for little clues or that "moment" when you know it is working. I did that with Biomed and drove myself crazy. Now it's all about what I sense and feel. I am going to trust myself more. I'll be convinced when I am convinced and if not, then not. (btw, some people do something similar to this called cranial sacral therapy.)

Reason #4:
I am no longer soy-free and casein-free and life is so much easier and cheaper this way. I even buy hash browns from McDonald's! They do not fry their chicken nuggets in the same oil as the fries (at least that is what the one in my neighborhood does). I also stopped baking this summer because it was so hot but I am looking forward to baking more gluten free foods when it gets cold. I like baking cookies for them. I also stopped the special and really expensive vitamins for awhile to see if there were any changes and to save some money. So far, I don't see much of a change.

Reason #5:
I am doing more "me" stuff without guilt. I have met my friends for drinks and dinner at night and left the kids at home with Kai. I have bought a few things from the neighborhood Avon lady after much needless preoccupation. I made the effort to buy myself body lotion as I am hoping it may make me pay attention to my body especially my weight and skin in particular. I have also found good t.v. to watch in the summer and not felt much guilt watching hours and hours of Korean dramas. It's so good and it's free!

Reason #6:
Time-Out is back in our lives. For a while I had taken it out because I thought that it was not helping Logan remember the rules, I realized that I had to keep trying. I am also believing that I'm not only helping him but also myself because he is so terrible with transitioning. I frequently have to give him a time-out in between activities. I actually bring the timer out with me sometimes so I can give him a timeout anywhere I need.

Reason #7:
I am trying not to talk so much. This is really really hard for me but I think it is helpful when you have children with ADHD. I frequently find myself getting flustered as I repeat commands to Logan so I have been emphasizing that I want "one-time listening." I don't want him to make a habit of tuning me out. Additionally, I have been relying more on pictures and videos to communicate what I want from them. I even made a YouTube playlist to tell Spencer that it's time to potty train again. There is a hilarious video from Japan. Even if you don't understand Japanese, your kid will not care. After watching this, I got Spencer to sit on the potty after four months of refusal.

Reason #8:
I am trying not to be so sorry. I say sorry frequently and to be honest, I don't think I mean it all the time. What I think I am actually feeling is gratitude and perhaps saying sorry instead of thank you because I don't think I deserve it. This is stupid. I will just say "thank you."

Okay, I'm awake. It's back to work. Back to life. Back to searching for even more calm.

Photo:
My first perm in ten years. I had never left the house to go to the salon for more than an hour and this perm took over three hours with all the waiting I had to do. I was so sorry to my husband for taking so much time and my anxiety took the form of me calling him to tell him what to feed the kids. (I thought I was helping) All that did was annoy him more. So my apologetic anxiety ending up doing more harm than good except for the fact that I really like my perm!
Posted by Jenn at 1:20 PM

Thanks nice providing information such one medicine website all helth related so plz check out website.easily buy Online medicine store.