Ignore the Behavior, Not the Child 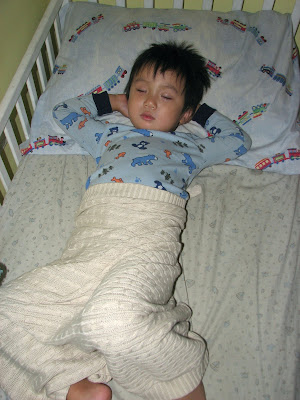 At Spencer's monthly meetings with his therapists, sometimes I end up feeling really ashamed and embarrassed because I just can not hide any of my flaws from these guys. They know everything and if I am failing to do something, it will eventually come out and be addressed. This month, we focused on Spencer's behavior which had been growing significantly worse and I was feeling powerless.

Talk to me about a four year old who doesn't listen and I'll give you some ideas on what to do because I have some experience now that Logan is five. However, if you ask me about a two-year old who won't listen then I can't help you.

That is because when Logan was acting "crazy" when he was two, I was still in my helpless mode. I was in denial that something was wrong and the professionals around me did nothing but blame me for his behavior. We then just sort of rode out the terrible twos which never really stopped even after he turned three. Thus, to this day, I still don't know what to do with a special needs toddler. Even though I have read books like 1-2-3 Magic and Toddler Taming, I do not believe it can apply to my toddler, not yet at least. If I recall correctly, even in 1-2-3 Magic, there is a part that says something to the effect like... if this method doesn't work for you, seek professional help...

So what to do? Well, how about ABA to the rescue? Again...

My ABA Lead therapist and pretty much everyone else told me that I need to firm up on Spencer and ignore his attention-seeking behavior. This includes when he climbs on me, pinches, scatters, and throws things. I know that they are right. I believe it in my heart but gosh.... for an anxious person like me... ignoring is really so hard to do. "Ignore the behavior, not the child," she said as she reminded me that I should praise his positive behaviors.

I hate to think that my child thinks of me as a toy but I guess it is partly true. Sometimes he pinches me and I am so used to it, that I don't even say "ouch." So then, Spencer will even say it for me, "Ouch?" like .. "Hey, how come you are not saying 'ouch,' I love it when you say that."

I think that I can achieve "ignoring" as a behavior modification method if I can remember that "ignoring" is active. That is what was told to me in my parent training program for ADHD preschoolers at NYU Medical Center. They said that I shouldn't ignore activities that are harmful to him, to others or to property but rather ignore attention-seeking behaviors like whining, nagging, and tantrums. (Tantrums are the hardest because of the neighbors downstairs but I will have to try.)

There is a certain way to ignore too. I am trying to teach this to my husband because Spencer acts like a cuckoo clock at bedtime if my husband puts him down.
Apparently, you are supposed to ignore as soon as an unwanted behavior begins and stop ignoring 10-15 seconds after the unwanted behavior stops and then you can give positive attention for the good behavior.

I am exhausted just thinking about this but I have to admit, this is a weak area for me. I think it's because I am easily distracted and have little patience but just like my vow of near-silence, I need to take back more control and model more self-discipline by ignoring them when necessary.

My ABA Lead therapist said that what will likely ensue is something called an extinction burst where he will do more of the unwanted behavior before he stops. I must check to see if I have enough Shiraz to survive such a burst. It sounds like it could cripple me for sure. Lately, I have discovered that a nice cold beer can also help.

Picture: Spencer thinks he is so cool. He even sleeps like a cool guy! I have to find a way to encourage that feeling while helping him find more appropriate ways to draw attention to himself.
Posted by Jenn at 2:15 PM

Ignoring is so hard! I have grown fairly accustomed to it. My husband has a really hard time ignoring the bad behaviors. He wants to do the right thing but his relex is that he is the "father" and he should have the control.

Afraid I didn't use my ignoring strategy this morning. Shamefully, I ended up yelling. I couldn't get my ADHD child to stop being wild and finish getting ready for school. We were on the brink of being tardy and I yelled to make everyone stop in their tracks and pay attention. If I had had the time to ignore the craziness, I know it would have subsided eventually.

So, lots of mom guilt today for loosing my patience.

Great advice Jen. Something every parent should use!

My Dad and step-mom who are, of course, THE experts (you DO detect the sarcasm, right?) on not only children, but special needs children as well, recommended 123 Magic to us.

We actually tried 123 with our son years ago when he was just of age to begin understanding (or so we thought) discipline. This was all before we really began to think something was "up" with him. It didn't work back then.

Fast forward to the beginning of this year - after DS had been dx'ed mind you - when my Dad and step-mom recommended 123 Magic. I knew we had tried it before but I had never read the book or watched the DVD. I was just going by what a friend had explained to me and what I thought I had observed her doing with her own son. This time though, I had the DVD to watch, thanks to my step-mom.

We watched the DVD and to my surprise, we were doing it a little bit wrong when we had tried it before. We then corrected our errors and began using it every time consistently on our son. Even then, it only had about a 50/50 success rate.

Not long after beginning to use the 123 method again, we had an appointment with a behavioral psychologist with whom we shared our 123 method. Her reply?

"If that's working for you, great. However, keep in mind, with autistic kids nothing stays effective for very long."

It was one of those priceless moments when I would have given my left arm to have had my Dad and step-mom in the room with us, but alas, they were not.

We still use 123 because we don't really have another method lined up. My son's school uses a "stick system" in which the children begin the day with three popsicle sticks and they have to pull a stick if they continue poor behavior after a warning. If they pull all three sticks during the day, they do not get a sticker at the end of the day.

I discussed doing something like this at home with DS but his teacher agreed that discipline at school and discipline at home should vary a bit. If not, the child will usually push the limits even farther. Additionally, DH and I feel we need something at home that requires no tools (such as the popsicle sticks) so that we can use it in public as well.

Anyhooo...I'm writing a book. I really just wanted to reinforce the fact that I love your blog and there are many times when I soooo feel your pain and feel like you and I are in nearly the exact same boat....And this post is one of those times.

I forgot to add that I should really look to my husband to teach me how to ignore because he is so good at ignoring me. Sometimes I ignore him right back and then he starts talking to me more.... behavior... it's a strange thing.

I think 123 Magic works for other kids and we need to put a twist on it for ours. As for Autismomma, good luck on your book! And hope you can ignore THE experts since they always seem to be wrong.

You raise a good point... how do we discipline children living with autism and adhd? The answer might be that we need to go back and understand that discipline doesn't mean "punishment," it actually means "teaching." I have to try to remember that... everyday. Thanks for the kind words guys.

Jenn - I read your comment and when you told me "good luck on your book" I was like, "Whaaaat??" And then I remembered I said I was writing a book. I didn't really mean I'm writing a book.....I was just referring to my comment to your post being soooooo long. LOL

I found that "ignoring" is just like everything else ... it just takes practice. I actually envision the "ignoring" time as "my" time where I focus on breathing and remaining calm and almost detaching myself from the situation. It takes practice but it does work. The more you do it .. the easier it becomes. Give it a try.

I'm a professional child care teacher and not a parent. My advice is for parents, esp. Moms to not guilt themselves about mishandling moments of frustration. Sometimes stepping away to another room and taking 10 seconds of breathing space can help a lot. You learn from each experience and the devotion and investment of time to your kids will yield both successes and failures. Please be easier on yourselves!!! signed JMP