Looking at Life with a New Set of Eyes 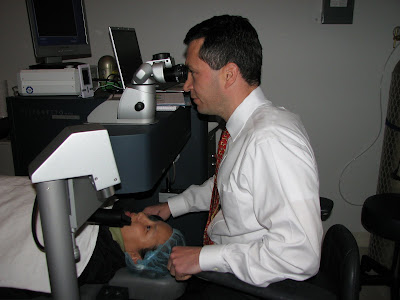 At November of each year, my husband and I debate whether or not we should get vision insurance. Even though it is a good plan, it is not cheap, it requires my husband to participate in it too because he is the primary insured (I'm not working) but he doesn't really need new glasses so it's sort of a waste. On top of that, even with the insurance, my glasses still cost money because my eyes are so bad that I need to compress my lenses or else I will have the coke bottles.

So I thought about it, and in the long run, I realized that I might save some money, time, and definitely reduce stress if I had LASIK surgery. My eyes are not good. If I lose my glasses then I can not see much of anything. And that is the scary part.

My kids have broken my glasses before. I had a spare pair that I didn't "hide" and so one morning, I woke up and I found them on the floor broken in half. That pair had the attachable shades for them ($100 extra) so the shades were out of commission too. However, I never liked the shades. Those attachable shades are not built for active parents who are constantly moving around because of their ADHD kids so the shades kept falling off. I much rather wear sunglasses which was one thing I was looking forward to after this surgery.

I stopped wearing contacts after I became a mom. It was too much of a hassle. I hated cleaning them. I basically never did and it's amazing that I never got an infection from doing it like that. And then as Logan got older and more difficult, even the glasses became a hassle. He would grab them, run away, HA, HA, HA, and he and Spencer would leave smudge marks on the lenses, and in the summer, because they were so difficult, I would end up stressing and sweating so much that my glasses tended to fall off my sopping wet face.

The smudges and the glasses falling off my face were more than annoyances for me. They were usually one of the several steps that would make me lose my temper or have a panic attack. I just couldn't stand it. (a sensory issue?) I was also always worried that they would break my last pair and then I'd have to walk into a eyeglass shop and come out minus 600 dollars or more.

So I found some discounts with a well-known doctor in New York City and I just dove in. Within a week, I had a consultation and had surgery 7 days later. That was yesterday night.

I know what you are thinking, who took care of your kids when you did this? Luckily, I set it up for a late appointment so I only spent a couple of hours with the kids by the time I came home. The fact that I came home with dark glasses on my face was a good message and barrier for them so they wouldn't grab at my eyes. I wish they would have left me alone more but luckily my husband was able to keep them away from me somewhat and I went to bed early to let my eyes heal. The next day, I was able to do mostly everything. I packed Logan's lunch and fed him breakfast. The only mistake I made was to forget to put the lunch in his school bag but the school took care of it. They are good like that.

The procedure itself was extremely quick. It didn't tickle, I will tell you that but again everything went by really fast. My doctor was good and he talked me through each step and it reduced my anxiety. (Note: if you have anxiety, choose a doctor who will communicate each step because you will freak out on the table if you don't)

Now I just have some dryness and that is normal, I'm told. What is most important is that I can see again. It is the greatest thing. No more going to the pool with the kids and realizing once again that I still have my glasses on. No more of the kids getting into a fight or breaking something while I go and quickly change into contact lenses from glasses. No more infuriating smudges (caused by Spencer) that leaves scratches after I wipe them. No more discoveries of broken glasses that cost over $500. (I still don't know who broke my last pair).

The funniest part about all this is that even though the children's needs stress my finances greatly, they are the primary reason I got this surgery. I would have never considered it if it wasn't for them. Thus even though these guys take my freedom and toss it at each other for amusement, because of them, I was given all that I needed to justify giving this wonderful gift to myself.

I know this is a lot of money I really think it is for the best. Overtime, I will have spent the same amount of money and even more time getting glasses. However, by taking all that money and struggling a little bit to spend it all at once, I am reaping major benefits starting today. Hopefully this act is the beginning of more bold acts of kindness to myself. I have never given myself such a huge gift before but after thirty years being helf captive to glasses and contacts, I think I could use a break.

Here's to all of us looking at 2010 with a new outlook or even a new set of eyes like me!

Photo:
My surgeon, Dr. James Kelly, was good to me. He talked me through everything. It was the one thing that stopped me from freaking out when it got weird. Luckily the procedure seemed to take less than 10 minutes so I was out of there before I could really start panicking.
Posted by Jenn at 10:10 AM

So glad you did it - I did it a while ago for the same reason, to reduce stress and make it easier for ME to take care of THEM. I love it.