Advocating for Yourself to Your Own Family 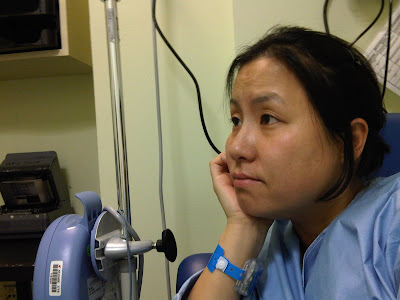 Since I broke my finger on Christmas Eve, things have been a little tough. However, things really changed when I went to the hand specialist's office last week and he told me that I had to have surgery right away because my nail bed had become damaged on top of already having a broken finger. If I didn't have the surgery, I could grow back two nails on that one finger or possibly none! YUCKKKKKK! Why? It was such a tiny break! How did I even get here?

It's been a journey and although I have a broken finger, I have been able to write but somehow I couldn't find the right words to say anything that was on my mind and thus the silence on this blog for the past two weeks. I guess I was feeling one thing one day and another the next day and then after my surgery last week, I fell sick from the side effects of the painkillers so I couldn't write at all. That was when I hit rock-bottom with illness and as I remove myself from a digestion hell laced with eye-shutting migraines, I can see a bit more clearly now and things have certainly been interesting.

The first interesting tidbit is why I even went to see a hand specialist in the first place. The urgent care center told me that I didn't need one but I wanted to go just for safe measure. However, it was very difficult to find a surgeon willing to see me on such short notice between Christmas and New Year's so I spent much of the day on the phone calling different offices. My husband was probably already annoyed with me because he had taken some days off of work to "help me" during the kids' vacation from school but never expected to do so much of the work since I had a broken finger. However, the hours I spent of the phone got him really angry because he thought I was making something out of nothing and called me a hypochondriac.

I was deflated. Maybe I was being ridiculous because I am an anxious person? I did however, find one office to agree to see me while my husband was still off but they wanted the x-rays. To my surprise, the urgent care center that I went to refused to give them to me when I called to ask for them. They said they would give me just a photocopy. Perhaps this is a sneaky practice employed by urgent care centers to get patients to do follow-up visits. I do not know but it was all the reason I needed to yell at my husband and tell him that they were not to be trusted and that I was right to want to see a surgeon.

I am not always right but I was really really right on this one. My friends had urged me to see one too. One friend said that if the tables were turned, my husband would see a surgeon too but this is not correct, I told her. My husband never does anything until it's on fire. He is not prevention-oriented when it comes to healthcare. This is why I schedule his regular check-ups now like he's my third child.

Anyway, I suppose the urgent care center might have eventually told me to see a surgeon because my nail bed had been damaged which could have caused an infection and deformed nail growth. My surgeon said that it was good that I came early because the longer you wait the results would be less cosmetically pleasing, and while I am no where nearly good at taking care of my appearance, I do not want monster nails.

Strangely the most important lesson that I've learned through this process isn't about not trusting urgent care centers but rather, how to advocate for myself in my own house. Having had an injury that required me to do less of everything causes a strain on all the relationships I have in this family, especially with my husband. It is a major struggle but I have to make it clear that I just can not do certain things and that I need to rest. Not surprisingly, the first person I must convince the most is me. And I have to do it everyday.

I also know that it is very important is to communicate with everyone what is going on with me. Thus, when I went to the surgeon's office yesterday and they removed the bandages, I took a picture (will not show you this) of my wonderfully discolored skin, dried up blood, and deep black creepy stitches and immediately emailed them to my husband while he was at work. This way I get his best attention.

I hoped that this will help him see why he needed to pull the extra weight around the house. I also showed him how I was right to see a surgeon because my finger looked like it was healing well, cosmetically too! I also communicated to him what was going on with me in the least whiny fashion as possible. The surgeon said my finger looked good but that it was infected and that I would have to be on antibiotics. Translation to husband: You better help me out more. 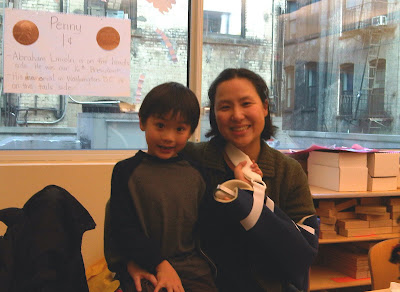 I think the extra communication with visuals helped because that night, he helped a lot without me asking him to do anything. He just kept looking for things to do (not hard) and the kids got to bed on time. It also helped that I called my new teenage babysitter to help me with the kids before he came home so that she could watch Spencer while I did some homework with Logan, thus one less nighttime duty we would have to worry about. I plan to call her to help me as many times as possible while my finger is healing.

I also tried to communicate my extra needs to my six-year-old, Logan. I showed him the picture of my healing finger, hoping it would help him understand to be more careful around me but his impulsivity still gets the better of him. He just simply can not be more careful around me and my finger but I guess I can print out a picture and show it to him. I will also try to praise any careful behavior he has around my finger.

I have also decided that I need aids to help me keep my commitment to take it easy so I got a couple of books from the library and I promised myself I'd stretch more. I would go to the gym too but I don't think I'm supposed to do that. Anyway, my Get-Out-of-Cooking/Dishwashing Card will not last forever. I may as well make it productive and enjoyable.

Picture: Here I am waiting for surgery. I took this myself to remember how I felt that morning. The kids had woken up extra early that day but somehow we got them back to sleep and I was able to steal away early in the morning without too much chaos. I felt liberated when I left. People were now taking care of me and then I felt like a child. I couldn't stop talking and thanking everyone. It felt and still feels very awkward when people help me but I have to get used to it. On the day of the surgery, I asked a total stranger to zip up my sweater. I should have been home relaxing and not out asking strangers to zip me but I had two previously made appointments that I couldn't cancel and so even though I left home at 5 in the morning for surgery, I didn't get home until 7 PM that night. If I do things like this, I can't blame my husband too much for expecting more work from me.

Photo 2: Me at a school event with Logan a few hours after surgery. I look like I have a broken arm but it's just a finger with my arm in a sling to keep the finger elevated. It was a tough day but I survived. I hope this never happens to me/us again. I know I have a special needs family and perhaps that might make me more accident prone but as some of you may know, having a special needs child when you are not 100% can be really really trying. I am going to try to be more careful from now on.
Posted by Jenn at 9:51 AM

Boy, can I relate! I had 4 knee surgeries in 2 years. With 2 special needs kids, it really challenged my husband. It's times like these that they find out how much we moms really do! Get well wishes to you...

I hope you are healing well and feeling better. I can't believe how good you look in the post op photo! You are a trooper and still finding ways to improve, even in tough situations. Communication is a big one at our house too. Feel better.
kct

What a brave and strong woman you are.

FANTASTIC insight on the subject of advocating--for family AND for ourselves.