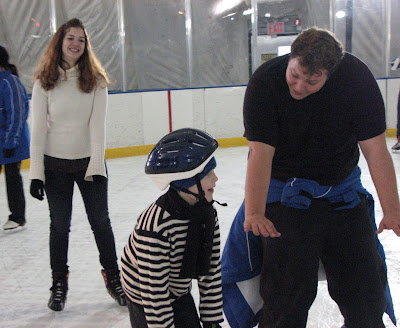 Early in the new year, this family achieved a major "first."

We recently threw the first birthday party that Logan has ever had since he turned one. I don't know when it was but perhaps around the time he turned three, we realized that he didn't have many friends. Additionally, whatever parties he attended before then, he appeared to want to leave and didn't want to do the activities like the other children. As he got older, less and less people asked us to meet for playdates and worse, we moved when he was 2.5 yrs old and we didn't get to know my neighboring families until the following year after I quit my job to take care of the kids.

Still even though we became more social as a family, Logan still had a hard time making friends and parents sometimes looked worried when their child was near him in the playground. I remember there was a mom who was attending a birthday party of a child who lived my building. We all knew each other and she immediately assumed we were invited but I had no idea that there even was a party. She asked me what apartment number was the birthday boy's apartment was and I pointed to the family's buzzer. I saw the presents in the back of her stroller and I realized what was going on. During the year prior around that time, we were invited to that boy's party but this time we had no such luck. I was sad but I couldn't blame her. A party is stressful in and of itself. Why invite a child who you think will definitely misbehave? The kids rarely played together anyway so that could have also been a reason to not invite him.

I think I chose this year to throw a party since Logan started attending his current school where they really foster a community spirit between the students as well as the parents. Now I felt confident that if he were to have a birthday party, someone may actually show up.

But I live in New York City and throwing a birthday party for a child in this town is really expensive. If they are affordable then they are really not made for the special needs child and their special needs guests. Clowns, princess parties, martial arts parties, whatever.... these do not work for my kids because they assume a larger attention span and more patience. We need our parties to be active, we need to be captivated, we need small numbers, we need extra grown-ups, we need our own space... we need a lot.

I decided I couldn't do anything that could possibly be affordable and good for my child and his special needs classmates until I started taking him ice skating at a place called the City Ice Pavilion. One day, it just dawned on me that an ice skating party would be just the right thing for us. The rink we frequented was affordable and the people were extremely kind to us. Moreover, for a small fee, they offered a lesson to my party and blocked off a part of the rink for us and gave us our own heated tent. All I had to do was make sure the party stayed small so that the kids could have a lower student teacher ratio. Since Logan doesn't have too many friends, this was not hard to do.

The kids were so excited. Many of them had never been on the ice before and none had ever received a skating lesson. The parents were delighted and on some of the moms, I could actually see their happiness on their faces as their children laughed each time they fell and cheerfully got back up before skating 3 more yards and then falling again. 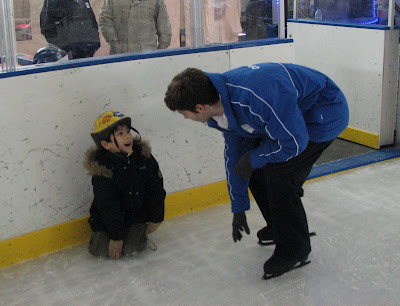 From a sensory perspective, I think the weight of the ice skates sort of decreases the need to be hyperactive and run around everywhere. So thus when they weren't skating, they weren't running around making their parents crazy. They talked to each other, came back to our tent and ate or drank juice, played with the toy vending machines, and some even went back to skate.

I was surprised a bit that Logan didn't spend that much time in his tent. I think he was overwhelmed because he knew this was all for him. I don't think he skated that much either, but I was happy to see what I wanted to see the most from that day. Logan finally had friends.

Ice skating truly is a great special needs sport. In a way, it is very similar to swimming because it requires so much from your body and many kids are inspired to just keep on skating irregardless of how many times they fall. My son's swim coach also said that you build a bond when you are in the water because the child is totally dependent on the adult holding her up and ice skating is very similar to that. Parents would hold their child's hands in the beginning until the child was ready to let go. For me, I get a thrill when I see my kids skate with or without me.

Almost all of the parents told me that the skating was a great idea. I suppose it really was because it isn't the first thing that comes up to parents' minds when you think about planning a birthday party but for some special needs kids, I think it makes a lot of sense. In our case, we lucked out like crazy because the rink sent us scores of instructors (for free) for our kids. I was completely surprised. It was like a Christmas movie with a plot about how a special needs family had been denied birthday parties for so long until Santa brought them the best party that was the envy of the whole town.

I think the extra instructors came because I informed them that my kid and his friends had special needs and really this rink showed us extreme kindness and generosity. With all the attention, our family felt like VIPs and as a special needs parent, I couldn't be more grateful since we always have to pay more to get our children to receive appropriate instruction.

Once in a while I think we all luck out this way. Some people are just darn nice to our children. I wonder if the smiles of our children touch these instructors differently than the smiles of typical children do. I wouldn't be surprised if they did because we all have to work a lot harder for those smiles and I think you know what I mean.

Photo 1: Logan's friend Theo and his mom Elyse laugh on the ice as Theo takes some tips from Augustine, an awesome skate instructor.

Photo 2: The birthday boy sort of kept to himself on ice but this instructor tried hard to get him to skate with him.
Posted by Jenn at 2:16 PM

You totally have me sold on ice skating!

Gabriel tried it back...a long time ago...and liked it, but there are limted places to do it here.

Now I am going to check it out.

Reading your post really hit home! I love your blog; keep up the good work!

Glad to visit your blog again and see all the amazing improvements! You are doing such a great job!