Special Needs Preschool Admissions Can Cause Freakish Anxiety Too 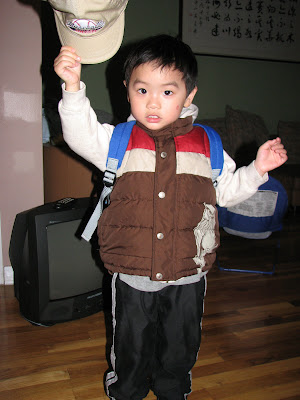 I have been terribly preoccupied with Spencer's preschool admissions lately. I am almost ashamed of myself for being so anxious but here I am in the throes of educationally-based craziness.

Even though so many factors are beyond my control such as someone accepting him or not, I still worry about it. Here in New York City, there are several select nursery schools for typical children that are just so incredibly difficult to have your child admitted. The process sends many upscale New York parents absolutely insane. For many, these nursery schools are apparently the first crucial step to take if you want your child to go to a good primary (private) school.

These select nursery schools were always way out of my income bracket and the frenzy that these affluent parents exhibit for such exclusive schools would bring out a bit of disdain in me. I would say to myself, these people have no idea how lucky they are to have this kind of problem. But now, I am experiencing my turning point with Spencer and feel so anxious especially after having gone through the impartial hearing process. With every step I take with Spencer, I wonder if I am anything like those parents whom I have scorned in the past.

But then again, I can't beat myself up too much. So much of the driving force of my anxiety stems from the misguided trust I placed in the people who were part of deciding where Logan should go to preschool. Now here are the crazy things that I think of when looking at a school since I am still licking my wounds from Logan having gone to five different preschools, three of them being special needs schools:

1. Will the school be truthful when they say they put a class together where the kids compliment one another in strengths and weaknesses. I have been told that often but it is not always the truth.

2. Will they be honest with me and tell me in a timely manner that they are thinking about sending him to another school or will they drop a bomb on me like one school did to Logan and let him go at their convenience without warning.

3. Will Spencer be the only verbal child class in his class? He's not like other PDD-NOS children. Will he be compared to his classmates or compared to typical children when assessing how much intervention is needed for him. It should be the latter but I have found that this doesn't always happen.

4. How much will they teach him to self-regulate on his own? Are the teachers really qualified to teach that? Not all of them are. And would the program that they use to help him behave be applicable outside of the classroom?

5. Will the school support me if I decide to take Spencer's case to an impartial hearing process like I did for Logan? I have heard cases where some schools have not. However, this is not one of those questions you ask when you apply for a school, or is it? How can this be worded gently without sounding paranoid and belligerent? So far, I have not found the answer to that.

I have also re-learned that even at the special needs preschool level, a bright child with complex behavioral needs is hard to place. So far, the best choice I could find was actually Logan's school which has a wonderful preschool in it. However the preschool is different in that I don't have to sue or get special permission from the city to have my child attend.

More importantly, I am in love with the possibility that my two special needs kids could see each other in the hallway and take comfort in knowing that his brother was just down the hall. So many families with special needs children have one child at one school and another child at another school. I'm sure that has got to be difficult. But if Spencer was accepted to his brother's school then we would be able to enjoy an integral piece of a typical child's life where siblings go to the same school.

So, it's obvious, I really want him to get there but how do you prepare a 3-year-old for an interview? Should you even prepare? Is that like cheating somehow? It's not like he's taking a math test to get in so what does one do? I suppose you really just want your child to be himself but a special needs child does not always act himself especially in new scenarios.

Since Spencer does so well in his therapeutic sessions, my worst fear was that they would see Spencer and feel that their school was too restrictive for him. Obviously that wouldn't be such terrible news but still, the romantic notion of my two sons in the same schools is so hard to beat. Additionally, I really felt Spencer was a good match for the school.

However Spencer did eventually have his interview there and it turned out that they thought Spencer needed more support than they could handle. I was so stunned and regretted all the negative things I said about him in his interview. I wanted to kick myself in the face and perhaps with more yoga practice I will be able to but for now, I could only just bang my head against the wall.

Luckily, Spencer got another chance. An impromptu observation occurred when I picked Logan up from school because he had developed a stomach flu and I had to drag Spencer along. The impromptu observation showed Spencer to contradict the earlier findings about him so he was able to be re-screened. I have never been happier about Logan being sick. He threw up in every room in the house that day but nothing could bring me down.

Now tomorrow, Spencer has another interview at this school and I am just reeling with hope and fear and excitement. I never thought I would be like this but my eye is twitching and I drank two glasses of wine which is a big deal. (I haven't drank much wine since I started yoga.)

My friend said that if I am like this for nursery school, imagine what I would be like for college. I see her point and I think about those top-of-the-line nursery schools in New York City and feel the frenzy of those parents. However, l can't help but think that my anxiety is different from theirs. Like them, I want my child to thrive one day but first............... I need to get him to a place where he can be comfortable with his body and that is the biggest difference between me and them. I am looking for a school that will get him to be comfortable with himself so he can learn as much as his mind wants to learn.

Intervening early for Spencer and getting him tons of therapy at such a young age has done wonders for him. A great nursery school would only continue that momentum especially if he didn't have to be kicked out from one of them like his big brother did.

Thanks to Logan and all the mistakes made in choosing his education (mine and others'), Spencer is truly benefiting from the resulting wisdom. However, great preschools for bright children with significant special needs are few and far between and I wouldn't be surprised if some of these placements are more competitive than the upscale nursery schools that periodically cause lots of media hoopla.

So the question is, can you prepare a child for a preschool interview? Should you even prepare them? Well, my social worker told me that if I believe that Spencer belonged in a certain school then I have to prepare him as much as possible so that he could have a "good day." In Spencer's case, that meant quelling any possibility of anxiety that he might have that would prevent him from functioning at his optimum level. I'm sure the school can imagine him at his least optimum level since they have all of his evaluations anyway.

This made sense to me. I do not know what the test is or what they will ask him, but I do know that Spencer does better when he's prepared. My social worker pointed out that our YouTube preparations of showing Spencer plane rides and beaches, really helped him prepare for our trip to Mexico. He didn't freak out once in the plane. She told me to prepare him just like that. While I can't rely on YouTube this time, I did tell him what he will be doing, how will he get there, where will his Daddy be, who he'll meet, what he'll do, when he'll reunite with his dad, the subway train they will take and what he'll get when he comes home. Everyone that works with Spencer drilled it into him today. Hopefully it will help.

Hopefully tomorrow and any other interviews he may have, Spencer will be his best Spencer-self and the evaluators will have the right information to make the best decision for them and us. I can only hope that wherever he goes, it will be a place where he'll make lots of progress and will help him find the right placement for big school when the time comes. Please wish us luck. We can certainly use it.

Photo: Here is a picture of Logan on his first day going to preschool #2 of 5. After this preschool run ended in disaster, we stopped taking "first day of school" pictures.
Posted by Jenn at 11:10 PM

Wow. I've actually never even heard of a preschooler being interviewed for a special ed placement! I would think it would be based more on observations of him in his natural setting, or parent interviews, or something!

Good luck! Prepare him for sure! Expose him to some questions you think they may ask "who is your brother, what color is this, etc." I don't know what they'll ask, but just make it fun. I'd consider offering a reward after the interview. Stress that it is fun and don't stress - I know it's hard. Good luck. I'll be thinking of you both. Great to hear he got a second chance!
kct