Strippers Can Not Eliminate Separation Anxiety 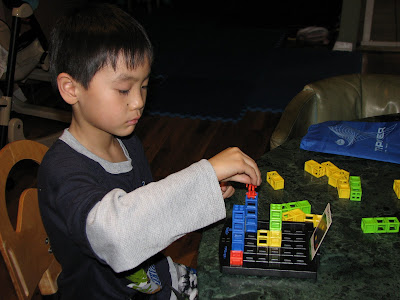 This past weekend was one of the best I've ever had. On Friday morning, I passed my eye test for my driver's license renewal SANS glasses thanks to my LASIK surgery!!!! Then I came home and tried really hard not to burst because I knew Kai would be home with Spencer and would have to tell me how Spencer did in his preschool screening. This is also Logan's school so I have been salivating over the notion that both of my boys would be under one educational roof- you know... like typical kids. sigh....

"It's over," he said. Kai loves to create drama by taunting me.

"What do you mean? What did they say?" I could so see him misunderstanding something.

"They said they are offering him a placement or a seat or uh.. whatever. I don't remember."

I called the school immediately and they confirmed it. "The moms never believe the dads," the Assistant Head of the school told me.

I could have kissed the ground but instead I kissed Spencer, the air, and jumped around my apartment for ten minutes in complete glee. Now I know that Spencer would be given the best chance he could possibly have to have a great start in his education. This school meets my criteria. They are not afraid of anyone. They are straightforward with parents too. They have kids who match Spencer's cognitive level but need just as much help as he does with other needs. The school makes classes where the kids compliment each other and they are very serious about that.

I was on my way to a special trip to Atlantic City without my kids and husband! The news about Spencer made me even happier and excited about my trip.

I promised myself that I was going to prepare Spencer and talk to him everyday about my weekend away but I spent all that energy preparing him for his screening. So he was quite shocked that I wasn't home when he woke up at 2 am looking for me. Kai stayed up with him for 2 hours until he finally went to sleep.

I was afraid of this happening but what could I do? A good friend from high school was getting married and my very close friend, her maid of honor, decided to throw her a bachelorette party in Atlantic City. No one expected me to go but I knew this would probably be my one and only chance to get away from the family. In his 3+ years, Spencer had never spent the night without me and the first and only time Logan did was when I gave birth to Spencer in the hospital. Moreover, I had never left my husband with the kids for more than a few hours.

How would he survive the whole weekend? Would he hate me by the time I came home or would he appreciate me more? I could only find out if I left home. I didn't have a good feeling about him until the hour I left. The day before I left he was bitter and picked mini-fights with me.

Nevertheless, I had a lovely time in Atlantic City. My friends have more energy and ability to rest than I do. They stayed up later than I did and slept in longer than I did. I woke up at 7 AM couldn't believe I had slept so late. I walked around the hotel, drank tons of coffee and read a book. Of course I called home and when Spencer woke up, my husband put them both on the phone. I started crying instantly and my Blackberry was soaked with tears. I had never really had a conversation with Logan on the phone. We had never really had a conversation. I didn't know how to talk to him and so, like an idiot, I just repeated everything he said.

"And Daddy bought a new toy for my brother."

"Daddy, bought a new toy for your brother."

"Mama, why are you keep copying me?"

I guess I can be just as socially awkward as my son. I missed them so much and late that Saturday night, while I was watching men take off their pants to very very loud music, I looked at my phone and saw that I received two voicemail messages from home within a span of five minutes. I ran out of the club and called home immediately. I wondered if Kai couldn't find something. Instead, Kai says, "Okay, Spencer, here's Mommy. Mommy is going to sing you a song."

Ah, the beauty of routine, even if it's long distance! I sang him two verses of his bedtime song, just like we do every night and then told him to drink a sip of water, just like we do every night, and then sang him one short verse of another song, the song that finishes our routine and then he went to sleep. These are all Korean songs and my children don't speak Korean but they love these cute Korean children's songs. My husband obviously can not sing them but I wonder if that was why he wouldn't go to sleep.

I stood outside the club in the cold trying to hold back the tears as I sang him his little song. I missed him so much but we all needed to do this. Do you ever feel like your youngest just owns you?

I am so glad we did our little separation. It was a perfect weekend for me. Now Kai and I are actually talking about taking a real family vacation. I am thinking Disney World right now.....which would probably be a sensory nightmare but I have YouTube to help me prepare Spencer. I also have a feeling that their diagnoses will qualify for them to skip the lines. I know some people want to make their children wait and while I could do that for Logan, I know that Spencer could really benefit from a VIP pass. If I go on vacation, I am going to go with their psychological evaluations in my hands. The more help I get, the more opportunities I have to reduce my stress and enjoy the trip myself.

Also, if you are wondering if Kai ended up hating me or appreciating me after the trip, I really don't have an answer. He said the weekend was okay and didn't complain a bit. Moreover, he didn't say anything close to, "Oh, I don't know how you do it!" I actually can't even picture him saying that.

If anything, I think he appreciated himself more after I went away. Maybe he realized that he could be with the kids alone for a long period of time. Tomorrow night, I think he is congratulating himself by going out with his coworkers which is something he never does. So while he is not necessarily appreciating me more after my absence, the fact that he is now open to talking about a vacation and going out by himself spells good results to me all around.

Some weekends can be perfect. Even the ones with first time separations, hours of tears in the middle of the night, naked sweaty men, and a stoic husband who never tells you what is on his mind (because there might not be anything on his mind at all and I have to accept that).

picture: I discovered this right before my trip to Atlantic City. Above is Logan's newest game: Tipover from ThinkFun. It's a little too hard for him but I love it because these puzzles really calm him down. Some of the most challenging things calm him down and he can just hyperfocus. Today he said he would like chess lessons when I briefly mentioned it to him.
Posted by Jenn at 11:46 PM

So glad you went on the trip. I think it is so important for us to see that our families can make it without us for a short time -- they certainly make us feel like they can't.

As for the vacation, I thought about Disney this year and put it off. It does seem like it might be over-stimulating. And the lines and crowds, and being on a schedule to go, go , go to see and do everything... I decided to wait a bit on that.

Luke does so great just going to the beach and being able to play freely and explore a new environment. He is really at his absolute best on vacation!

oh, congrats on the school placement too!

woohoo! Yipee! I am so happy for you - both boys in the same school. Congrats and kudos for going on the weekend trip.
kct

That does sound like a perfect vacation! It sounds like the boys are doing a lot of growing right now in many ways! I hope you do get to go to Disney World. Try to go off season so it is quieter, because it will be less overwhelming for the boys, AND because it is just much more pleasant that way!

I love this post, especially your phone conversation with Logan! I love hearing Theo's voice on the phone; doesn't happen much. But yeah, I never know what to say either! I've totally done the copying thing.

If you ever are away from them for a longer time it's a good idea to use a laptop and a webcam. But not when there are strippers around!