What Happens When You Go To Bed Angry? 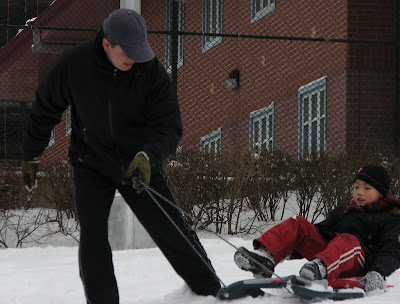 Logan is in a great school but that does not mean that he is going to have great behavior every day he's there.

I have to keep telling myself that because every time he has a bad day, I start to visualize what he could have done, how much stress he must have felt, and if the school will let him go eventually. I will never get over that fear, having had my child kicked out once before, without warning. I have even talked to the school management about how a child is asked to leave and what he told me was so reassuring but my anxiety is WAY TOO POWERFUL. I heard his words. I believe them but I have to feel it in my bones.

That said, we were thinking of changing his medication or his dosage AGAIN. His teacher and school psychologist both talked to Logan's developmental pediatrician and I expected a change right away. Instead, they gave me homework.

More homework. Great. I hate that word now more as a parent than as a kid.

I was asked to keep a diary that notes when and what time he gets up and what he eats for breakfast, when he takes his meds, his morning mood, and when he falls asleep. It's not hard to do but I was a bit annoyed that my doctor wasn't just going to give me a new script. More work for me..... that's what I thought initially.

However, I think it's better this way. I really need to see how much sleep affects his behavior. I noticed on the days he is best behaved, his lunch comes back completely untouched.

I had a big fight with my husband on Saturday night and we have still not made up yet. Today is Wednesday and I have not spoken to him at all except for things like bringing home cash or being home at a certain hour so that I can attend a meeting. I do not even say "goodbye" to him as he leaves the house in the morning. This is huge for me because I am big on greetings. Call me Korean. When I was little, if I didn't rush to the door when my dad came home from work and greeted him with a bow, I would get lectured or bopped on the head.

Nevertheless, the most awful thing about our fight is that for a while there, I don't think he knew that we haven't made up yet. He probably was just going to move on but I think he doesn't realize how upset he made me. We basically fought about the kids (surprise surprise). Kai instituted a big change in rules without telling me and I told him that it wasn't a time for change because we are working on this food-sleep diary thing right now and the change he wanted to institute had to do with mealtimes and thus would affect data collection.

He complained that Logan's refusal to eat or feed himself is out of hand and that I look so unhappy and am constantly complaining about how hard it is when he comes home. Huh? I never wanted to be that person but apparently that is how he sees me. And then, he even went as far to say that I am not telling him anything. Right, as if having to settle for grunts and barely any acknowledgment when I give him updates is not belittling and disrespectful to me. No thank you, I will keep my updates to myself. You can ask me for one if you are so curious.

I certainly have a job in this house and I do not feel like I have to give him all the details. He is not my supervisor. That said, I do email him from time to time about things going on. I feel that email is easier. We both have more energy during the day. By the time we put the kids to bed, no one feels like talking.

Additionally, he is not a talker by all means so short sentences on emailing him to communicate is less stressful and disappointing for me. Who ever thought email could help facilitate better communication in a marriage? It really helps his poor communication skills because he is at work already so as a natural consequence, he emails me using office-based courtesy. That means, if I say something, he will acknowledge receipt which is more than what he does at home. And for my end, I can not get bothered because he is not facing me when I'm talking to him. I really hate that. I honestly don't know how I deal with Logan's ADHD since not looking at me when I talk is a hallmark trait.

Irregardless, I am getting more upset at how my husband doesn't even realize or does realize but is purposely ignoring that I'm still mad at him. Fighting is one thing but he used some really harsh words when he was talking to me and I found it to be abusive. Don't get me wrong, he's not an abusive husband (I've had abusive boyfriends before, trust me). However, abusive words are abusive words so I told him that the mean disrespectful talk had to stop. Still he didn't apologize. He was too mad at the time and he thinks everything has blown over by now.

Sorry, but it has not. I didn't ask for an apology and I am not waiting for it anymore. Instead, I have decided to just live like a person who deserves an apology. It would be better if he was sorry and communicated that to me but if he doesn't know to do that then I will have to just show him and myself that I deserve to be treated better. I think the best way to do this is just by making myself happier and sacrificing less.

So far, it's been fun! Some of my self-therapy:

-I bought silly things like gloves to wear overnight as you super-moisturize your hands ($3).

-I bought a sweet smelling body mist ($6) because perfume is too expensive but eventually I will get it. I promised myself. I am still in love with Issey Miyake

-I'm taking Logan to see a marionette show for the first time in his life. It's also a playdate with his classmate. I emailed Kai to tell him that I'm going because he'll have to watch Spencer. He emails me saying that it was fine and then asked me how much it was..... I decided not to answer him because since it was only $15 dollars for the both of us, I didn't even want him thinking, "oh well that is okay." I do not need his approval.

-I'm going to meet my friend on Friday night after the kids are asleep. No need to ask if it's fine with him since the kids are sleeping. I will just email him to tell him I'm going so he won't be surprised come Friday night.

-I changed doctors finally because I found one that will actually listen to me, even when I talk about my energy (chi) being blocked and my acupuncture treatments. I am going to see her today because I think I may need to go back on stimulants and check out my thyroid.

-After my doctor's appointment I am going to relax in a cafe and read a book!

It's not all about going out and spending money. That will only make him angrier and I will feel guilty. It's more about enjoying myself and strangely, I have been cooking better meals and I'm not doing it to get on his good side but I can see that he is enjoying the food. Additionally, I am cleaning more and organizing more. It all makes me feel good. I am also really focusing on what I'm eating. I went to Trader Joe's to buy a whole bunch of salads and dressings because they are quick and easy and the reason I gain weight is because there is never anything low-carb in my house that is quick and easy. Now there is.

I don't know if my husband and I will ever discuss our fight. But this experience has been very good for me because for once, I didn't ask him to apologize to me after he hurt my feelings. That took a lot of will power from me because I am usually too weak and need him to make me feel better even if I have to ask him to say sorry. Of course, we all know that such a requested or forced apology is a ruined-and-doesn't-really-count apology. He clearly didn't want to say sorry and I am doing what I can to accept that. Perhaps, if I treat myself to a really expensive sashimi lunch, I may get myself in a good enough mood that eventually I can accept him and forgive him for not being able to apologize when he should. Nobody's perfect. Hopefully someday he really will understand where he was wrong.

Photo: Even though I get annoyed with Kai a lot. There is no question that he is a good dad. I do tell him that. I hope he remembers that I do.
Posted by Jenn at 9:18 AM

You go girl! That's like reading my own account of fights w/my husband. Apologies are outside his comfort zone too. All we ever fight about is raising our kids too.

Be careful though because your boys will pick up on this. My daughter started counseling a few weeks ago for anxiety. On her first visit she was asked to name things she's anxious about. One of them was that daddy and I will get divorced because we fight all the time about the care of her ADHD little brother. Now, we do bicker some about how to discipline him, etc due to his special circumstances but we are no where near separation or divorce or even marital problems. But she saw it that way, she FEELS like it is a danger. I don't mean to give you more anxiety but something to think about.

Sometimes punishing makes you feel better (silent treatment) but you will work it out.

Kudos to you for the courage to blog this today too. In my blog post this morning I said "daddy eats crap" and then felt guilty for throwing him under the bus like that! :)

It is so good for us mom's to remember to take care of ourselves. To bad it takes moments like these to remind us. We are so busy running around making sure our children's needs are met and husbands are happy that we forget that we are actually better momma's when we take some time out for ourselves! Thank you for the reminder.