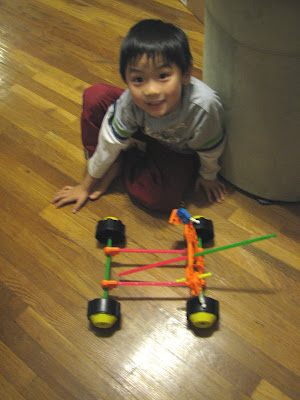 I know that mine is not the only family to go through this issue but boy AM I ANNOYED!

This past Christmas, my brother bought a Wii set for Logan. I was really grateful not only because it was an expensive toy but also because the last time I had tried the game for Logan, he failed at it miserably. To me, the Wii was just another typical thing that my atypical boy couldn't enjoy. I was especially dejected because I had heard of the potential therapeutic effects the Wii could have. It seemed like a wonderful way to move around productively so he could get that out of his system but alas, it proved too hard for him so we decided not to keep it.

When Logan tried the Wii this year, the games we tried were different. Everything seemed easier and Logan took to it right away. He was in heaven and we watched him enjoy himself the way you watch a kid eating an ice cream cone for the first time.

That was over three months ago and our lives seem to be different now that we have a Wii. I actually find it hard to remember what we used to do without a Wii. He loves and plays with it so much. We are going on vacation in June and I actually planned on taking it with us but now I am not so sure.

At first, Logan just played the Wii Sports game. That was easy enough. He liked it a lot and was able to teach himself how to do everything. That created less stress on all of us. Logan likes to learn by trial-and-error when he is excited enough about the lesson. Wii Sports definitely did keep him busy but eventually he would get bored and walk away.

However, my husband then bought a game called Mario Kart, a race car game, which really didn't have any educational or therapeutic value at all from at least what I could see. I suppose it could possibly have some hand-eye coordination help but really, unlike his Leapster, Logan is not asked math or spelling questions and unlike Wii Sports, he is barely moving any part of his body. Nevertheless, Mario Kart is his favorite game and he bothers no one for quite a good chunk of time while he plays.

This past week, we had a break from school and Logan was allowed to play the Wii intermittently throughout the day. I would often try to hide the remotes or the game CDs so that he would not play without my permission because once he started, it was a struggle to get him away from it. I would have to hide the CDs in different spots because he knew where my hiding places were. In the morning, I would walk into my kitchen and see every cabinet door left open because Logan had been looking for it. He was like a wee little drug addict needing his fix so badly that he didn't even bother to try covering up his tracks.

Sometimes, I would forget to hide it and I would wake up at 530 AM to the wonderful vrooming zooming sounds of the Mario Kart. I would quickly tell him to turn the volume off or to not play at all so that Spencer could continue to sleep. Thus Logan, my crafty angel, learned to play in silence and I think he soon realized how rewarding it is to play video games at 530 AM when everyone is asleep and no little brother to bug you and no Mommy to nag you to turn it off. I think Logan's ritual with Mario Kart is akin to my 3 AM yoga rituals. We all want to be undisturbed when we are having our "treat."

Unfortunately, his love for the Wii seemed to be turning into an addiction. Admittedly, I knew I was partly to blame. I was depending on it to motivate him to do his homework or to keep quiet in the morning. I know how typical families feel about video games more or less. They set limits with it and it is used for reinforcement as well as punishment. I think I was doing the same with it but perhaps I was using it too much in that respect and that was perhaps the biggest downside. So I decided to examine it from our family's point of view. Is the Wii a friend or a foe?

Friend:
Foe:
I thought about getting rid of the thing completely but I think that is not a great idea. The "friend" list is significant and like cellphones, the internet, i-pods, etc.... we must learn to live with them and live with them productively. While they can take over your life but these games are a part of many boys' life and I have to learn to make peace with it somehow and perhaps, even make it work for me.

So the Wii stays but I had a long talk with my husband and I laid down some rules. My husband had almost no input but that is okay. I am used to it. I told Kai that Logan hasn't shown much interest in anything else this month except for the Wii. I think he saw that too. I told him that Logan can only have the Wii if he does his homework and he can only have it for 30 minutes. For now, he can also play if he has guests. I'll see how that rule pans out. I realize that this new rule means that we can no longer use the Wii as a crutch to keep him quiet and busy but unfettered use of the Wii is causing even more problems than his usual hyperactivity-caused-by-boredom. Who needs more problems? Not me.

Photo:
Building toys like this Kid K'nex set was and still is a favorite of his but now I see him use toys like these a lot less.
Posted by Jenn at 8:36 AM

"Santa" got the Wii for us and I was excited at first too because our OT told us there were activities on there (eg: Yoga, balance games, etc) that could be incorporated into Jaimie's Sensory Diet. But she struggled, and still struggles, with coordinating her body to do the games then she gets upset. THEN she becomes obsessed with "I CAN DO IT!!!"

We keep it but I limit how long she can be on with her timer, get her to do her calming stuff after using it (eg: Listening therapy or massages) and get her to play alone because when she sees her younger sibs doing the stuff easier and faster, it's just devestating to her.

Thanks so much for this post, Jenn. Very important info and insight.

Hi Jenn
This is a great post!
My son is ADHD and he is completely addicted to the Wii. He has never been very good at playing with traditional toys so that helps explain his addiction.
We have only Wii Sports and Mario Kart. My son plays Mario Kart standing up, he can't sit down while he's playing it, so he's actually moving around, etc. Perhaps you could try this with your son?
I agree with you that the Wii has turned out to be much less therapeutic than I thought.
Thanks so much for sharing
MC

my son has high functioning autism and his feelings about the wii are the same as your son's. we limit him to 30 per day on weekdays. weekends he can play longer but he he cannot wake up early to play--has to be when we are up (otherwise he was depriving himself of sleep). if he has a problem getting off, that time comes off the next day. mario is especially addictive to spectrum kids--it really is. I wish I did not have it. I am not getting the ds because then he might display these same problems out in the world, instead of just at home. thanks for the story.

Ah, the implementation of the infamous Wii rules: a must for all special needs families. :)

I have the added challenge of a very gifted and very typical 6 year old who wants to play Star Wars and other 'cool' games that his friends play at their house (when he is on play dates -- he learned that other kids don't have NEARLY the strict rules we do for Wii). Challenging for sure.

But for as much fun as the Wii is, it is equally as difficult.

Good luck with your Wii battle. :)

oh my goodness! I thought we were the only ones whose child is 'obsessed' with mario kart.

as much as I like the break and peace it brings my home...the chaos and terror that takes place when it's time to put it away is so taxing. it hasn't always been that bad but the last couple of days have been nuts.

we need to find a balance where he can have time but not cause the meltdowns after...he has started getting headaches and dialated eyes after playing games or watching tv...and the meltdowns the last couple of days have been out of control too...