Why Everyone Should Google Their Ex 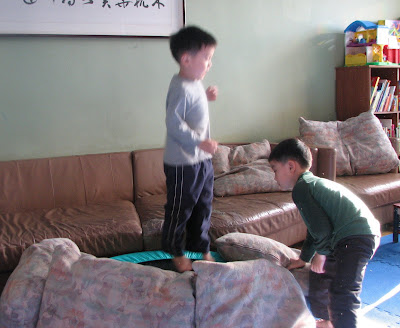 On the night of Mother's Day, I had a dream about my ex-fiance. I do not remember anything about the dream at all which is probably a good thing because he and I ended on really really really bad terms when we broke off our engagement just two months shy of our wedding date.

I think he appeared in my subconscious because I was looking for pictures of a dog I used to have and stumbled upon photos from my mid-twenties when I was engaged to someone else. It is funny that I had a dream about him where I could clearly see his face since I actually don't have one picture of him and so I haven't seen his face in years. I am very black and white about break-ups and I throw pictures out. I am never friends with old boyfriends.

The next morning, I found myself googling my ex-fiance to see what he was up to. It has been over 12 or 13 years since I saw last him. I was kind of curious to see what his life was like. Getting a bit of information was actually really easy since his name is not a typical Korean American man's name like David Kim. If you search for me under Google, you will not find me until maybe the 10th page because Jennifer Choi is to Korean Americans as Maria Lopez is to Latino Americans. There are so many of us.

A quick search told me that he owns a bar or lounge and is a contractor for the U.S. military. I suppose that was impressive and the next thing you know, I started getting depressed. Where was I in life? Here I am at home with only a memory of a career and fighting depression, anxiety, and loneliness on a daily basis. I am sure he lives in a big house in the suburbs with 2.5 kids and is making good money. I am here in a neighborhood that my immigrant parents moved out of when I was 11 years old.

My day spiraled down even further after my husband called in sick and I decided to do some discount shopping. There was a new Century 21 that opened near my apartment and I had really wanted to try it but never had the time. I hoped that I would find something pretty to wear and that it would be affordable. I am a bit tired of shopping online. In my closet, I have a ton of things from Lands End that I have to return.

When I got there, the store had just opened and was very empty. This is a perfect scenario to score big in a name-brands-for-less store. The guarantee in such a store is that you will find something as long as you have the time and can deal with the crowds but it was Monday morning and there was hardly anyone there. I started grabbing anything that I thought was pretty and by the time I got to the dressing room, I was holding ten pieces of clothing.

As I tried the clothes on, I became sadder and sadder. The clothes were pretty but they didn't look pretty on me. I was a big blob in stylish clothing or at least I felt that way. What scene could be more pathetic? I had already been there for almost an hour and was about to walk out with just three pairs of beige underwear. Real sexy.

I thought about my ex-fiance and how embarrassed I would be if I were to bump into him at that very moment. I am 20-30 lbs. heavier than I was when I last saw him. I am none the richer and have no identity in a career at this point.

According to what I found in Google, he no longer lives in New York but still, you never know, right? His hometown is New York and I think his parents may still live about 10 minutes from where I was shopping. Ugh.

I am not quite sure when but some time during the day, I started to feel better. Yes, I am heavier now and no I don't live in a big house and drive a Lexus SUV (I know SUVs are not eco-friendly but I love the Lexus SUV). However, I realized that I do like my life. I actually really like where I live. And although I complain quite a bit about him, my husband is a good man. I thought about that today as I realized that Kai stayed home to reboot himself and I used the opportunity to go shopping while he stayed home with Spencer. He didn't complain one bit. I even told him to sit and blow bubbles with our little guy(our new favorite therapeutic speech exercise) and he just did it.

I also thought about how my husband is really a partner when it comes to the kids. We've become a bit more at ease with our special needs life. He is taking more of my direction and respecting it but at the same time he is aware of what is going on (to an acceptable degree at least). I am also getting better and communicating their progress and ongoing needs to him.

I thought about my ex-fiance and how I might not be able to say the same things about him that I've said about my husband above. I don't think I would like living where he lives, being his wife and raising not just one but two children with special needs with him. That last part makes me really think about how we were definitely not a good match because it is hard enough to see eye-to-eye with a spouse on how to raise a child but raising a child with special needs..... not every marriage can survive this life.

I suppose this dream that I had, the morning after Mother's Day, ended up helping me remember that I was one of those lucky people who escaped making the terrible mistake of marrying the wrong person. But still, here I was standing in front of a dressing room mirror and feeling sorry for myself because of what my life looks like and not what my life actually is like. 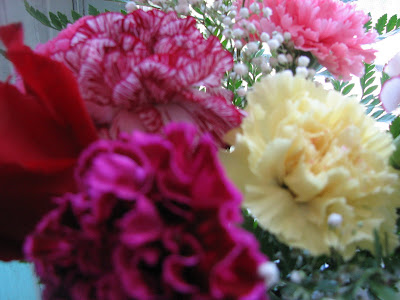 I think I forget how grateful I should be. I really really should be. My husband is a pretty decent guy and I have two kids who make me laugh and feel very proud. Last weekend, Logan was really driving me nuts with his hyperactivity and silliness - these are kind ways to describe the behavior. It was only 9 AM on a Saturday and already he had worn me out and then in the car, on the way to our weekly visit to Grandpa's house, my strange little six-year-old said, out of the blue, "Mom, I am going to buy you a car when I grow up and go to college and get a job."

My husband and I grinned at each other and then I joked around a bit and said, "Okay, but I don't want to share a car with Daddy. I want my own car."

Logan replied, "Okay, I can do that but Spencer is going to have to help me."

With that, Kai and I just laughed and laughed. I have to be grateful for Logan's heart. It is something that he's born with just like his ADHD. We are just so damn lucky he was born to us. I can lose 30 lbs and earn lots of money to buy a big house but Logan's heart is something I can never buy.

I know there is something in him that wants to help people. Maybe lots of ADHD kids do. My husband's job entails analyzing and reporting faulty trading activities and this month I explained to Logan, my math geek son, that "Daddy catches bad guys with numbers" and his eyes lit up with inspiration and excitement. He lit up again when I explained to him that if becomes good at chess and math then he could be a codebreaker when he grows up. I told him that he could break codes to understand messages written in secret patterns and find out which park has the bomb so he could save the children. Am I crazy or what?

Like my friend Sue always tells me, Logan will be really great some day..... I just have to survive his childhood. She is so right. I hope I can survive both of my math geeks' paths to maturity and when Logan eventually becomes a codebreaker or do something else in service of others, I hope I will finally finally finally be 30 pounds lighter!!!! I know yesterday was about celebrating our lives as mothers but I have to say that I was most happiest today because I remembered whose mother I am.

Photo 1: Logan can easily kick or push his little brother but he also looks out for him without any direction from me. Here he is surrounding the trampoline with cushions to better ensure Spencer's safety. This is the same kid who crosses his arms and says that he wishes he had another mother.

Photo 2: One of my Mother's Day wishes that I didn't tell my husband but hoped he would do was to teach Logan how to honor his mom on Mother's Day. On his way home from chess class, Logan and Kai bought me flowers. A single rose from Logan and a bouquet from Kai. Logan was proud of himself for putting a smile on my face and filled up the vase with water himself. I am grateful for both of them.
Posted by Jenn at 11:47 PM

Kai's job sounds crazy-cool, and so inspiring for your little "math geek." Thanks for this post. It's so easy to get caught up in the ADHD, and the loneliness and monotony of raising a special needs child. Logan reminded you that he's just a kid with goals and dreams and a grand desire for adventure and success. We so need to hear that from them. I love what your friend says about them being okay one day, you just have to survive their childhood. So true!