How I Survived 4 Weeks of No School 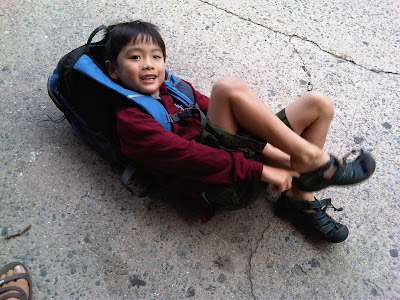 I feel like my summer started on August 13th, the day when Logan's summer program at his school finished. He is lucky enough (or unlucky enough) to be eligible for a 12 month special education program. The extra two months are given to prevent regression says the school system. I agree with that but for me, those six weeks of education at his school is my answer to what to do about Logan for summer camp, since obviously I would have a hard time paying for something that would have trained staff to accommodate his needs.

Even though I usually dread those few weeks when I have him at home without the support of my husband or his school, I am happy he was home this summer. This is the time when I learn about him the most. This is the time when we can play without worrying about school bus schedules or packing the lunch that he doesn't eat. This is the time when I can challenge him myself and take him to greet new challenges, new people, and new places. Spencer gets to do the same because this is the one time of the year, I will allow him to miss therapy at home. He finished that process anyway since he starts school today as a special needs preschool student. I miss the therapists at home but am relieved to have it all done at school now.

1. I have good drugs. When my anti-anxiety medication stopped my digestive system from working, I was in complete misery but I kept going and my body became used to it. Now I don't feel so sick anymore and instead, I have been able to stabilize myself and have not had one panic attack or panicky feeling. I am even more patient now. I think that was the key to making this difficult time work for me.

2. I am just flat out ignoring my husband. Actually, that doesn't sound exactly right. What I really mean is that I am not going to want him to be happy just so I can be or stay happy. He has always been so quiet but sometimes I am uncomfortable with that. My husband is his own person and if he goes to a social gathering and doesn't talk to anyone then I am not going to worry about it and wonder whether I did anything wrong. I need to leave him be and hopefully he'll come around. Sometimes I ignore him for a couple of days and I swear he doesn't notice until maybe the third day or so and then he starts talking to me a little more. I'm not playing hard to get but perhaps that element needs to be explored more.

3. I was busy keeping them busy. I ignored everything else. I am behind on just about everything and I have decided not to care. When they were home, I barely looked at my computer or talked to anyone on the phone. I didn't even post on this blog for over 4 weeks! My mile-long to-do lists were gone. Everyday I woke up and just knew that I was going to get the kids to do something fun and that I wouldn't be scared to be alone with them.

4. I put Logan to bed later and I decided just to wake up earlier. I always used to give him his sleep aid earlier and just dealt with him waking up at 5 AM but I realized that it did no one any good. Instead, I decided that he can stay up a little longer and do the things to occupy himself quietly that I wouldn't allow him to do in the morning for fear of creating bad habits or waking up his little brother such as playing with the computer or playing the Wii... etc. Now he is up later at night and my husband can share more responsibility in watching him since I always had morning duty.

5. More importantly, I decided to shift my personal time from late evening after bedtime to early morning before the kids woke up. This change made a critical impact in my daily overall mood. I had energy to do things like yoga, write emails, read the news. Before when I used the late evening to make time for myself, I basically just watched t.v. because I only had enough energy for that. I didn't like to write at night because my mind would always be racing after I finished and then I couldn't go to sleep. Now, I wake up as early as 4 am and I absolutely love it. Because Logan's slept in more, I had the time to myself to be quiet and do yoga and just relax after a full night's sleep.

5. Logan's new medicine is working better for him. As soon as his vacation started, I came to better understand the pattern of behavior that they saw in school. We decided that perhaps his extended release formula was possibly not appropriate for him so we switched things around to a short acting stimulant and things seem to be better for him (and then for me).

6. I have become a playdate whore. I ask everyone for a playdate. Sometimes I get a yes and sometimes I get no response at all. I don't know if they are avoiding me or my kids or both. I just try to not take it personally and just move on. I understand fully that my kids are not the most socially appropriate peers for their child. For me, it is not about Spencer and Logan having typically developing social models for friends. At this point, it is just about them being happy with other kids. They also played with kids who have special needs and have had fun doing that too. Playdate whoring has led me to understand that all kids are unique in their own special way and that despite their odd behaviors, Spencer and Logan can be fun companions that children may actually seek.

However, on that last note, I really have come to appreciate the extremely kind souls that have seen the goodness in my children and have encouraged them to be with their own kids. This is relatively new to me. I literally asked them why they haven't shunned me and my kids. (That will be a future blog post). This summer has been so interesting and fun and it is all because I put my kids with other kids every single day I could. It didn't always work out great but I can see that with each playdate, they look forward to more social interaction and can improve their play and conversation skills.

I also found that me being with other parents eased my own anxiety and elevated my patience with my own kids. Everyone remarked how patient I was and I told them that I am not so patient but the difference is similar to what you experience when you are eating out with a group. Sometimes, you don't pig out in front of them because you just don't want to look disgusting. You almost see yourself through their eyes and then you regulate yourself. For this reason, I often did not lose my temper. That is what ended up happening as I surrounded my family with other families. It was healthy and healthy is good. Thanks to all the moms and kids who played with the ADHD Brothers this summer!!!! Not only did you make our summer bearable, it actually turned out to be a blast!

caption: First day of school this morning. Logan left our apartment with his shoes not quite put on. This is how he usually leaves the house. Here he is lying on the pavement (on top of his brand new schoolbag!) putting his shoes on.
Posted by Jenn at 7:41 AM

The detail oriented party planner and mother of a A.D.H.D son said...

My son and Logan and you and I have some common threads.. nice to "meet" you.
http://hyperfocusmom.blogspot.com

Jenn,
Hats off to you on the playdates! I am now the mom to a middle schooler and am trying to figure out how to orchestrate that sort of playdate or friend over - what on earth will they do? I am at a loss. I know something will pop up but for now I'm frozen. You certainly weren't. Way to go!
kct

hi jenn--good for you on the playdates. I did alot when my son was young--some turned into actual friendships, some did not. but at this age, 9, kids are very critical of anyone different. so it's much harder now. I encourage you to keep it up--this is a good time for making friends and socializing. kids who are used to your kids from a young age will accept their quirks--kids who meet quirky kids later in life are more challenging socially.
at this point, I am taking a break from pushing the playdates--my son has to do more of the identifying of who seems friendly--I still want to support him but it's harder.
good for you that you psyched yourself up to do this.