Hello and Goodbye but Not Really

As I see that folks are still continuing to drop by despite the last post in November 2011.  I'd like to say, "Hey, drop on by the new site!"

I hope you'll love reading it at least half as much as I enjoy writing it.   Thanks for dropping by Can Mom Be Calm?

p.s. I may be absorbing my old one into the new one so my followers can get my latest updates.
Posted by Jenn at 10:31 AM 4 comments:

I hate to be one of those people who leaves a blog hanging. But that is exactly what I've done. I know there is no great damage. I have no contracts, no stakeholders, no ads, and yet it pained me whenever I saw it or was asked about it.

I decided a few months ago to close Can Mom Be Calm? but I think I was just waiting for the right moment to close it and that time is now.

Sheesh, I was in the newspaper again. The last time I wrote about being in the newspaper, it was to defend myself about how I pay my teen babysitter after a wonderful New York Times article talked about the special needs babysitting program that my kids' babysitter had completed. But this time, the issue was very different. This time, I was in the paper because I was in the middle of a shame-on-you article where I shared the story of my eight-month-long battle to get safe school bus transportation for my preschooler receiving special education.

Seeing Socially Through Their Eyes First 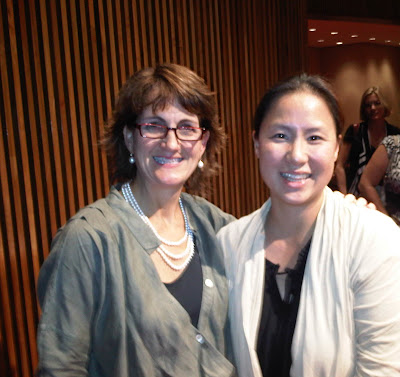 However, I needed to post this because I had an explosive learning experience at recent a YAI conference here in New York and for me the best way to keep this memory alive is by recording it and sharing it.

You may have heard me discuss this in previous posts but after having listened to the Michelle Garcia Winner in person, I can appreciate even more now why her curriculum, Social Thinking is being used all over the world.

I first heard about her after an auction win for a 2-day session for a sibling dyad (relationship/play therapy) at Emerge and See an NYC-based educational center for special needs children. One of the owners, Alison Berkley spent a lot of time on the phone with me trying to explain how she uses the principles taught by Michelle Garcia Winner in her approach to helping siblings play with each other.

"Michelle Who?" is all I thought and then moved on. I wasn't interested in the curriculum. I honestly didn't even know there were different social skills curricula out there. All I thought was, "Could you just make my kids play with each other without it erupting into a fight, three seconds after I walk away?" 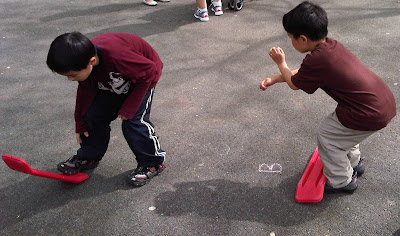 I know there have not been any recent posts in a long long time but I have been working on a big bang final post. I hope you can come back next week for it. It will be posted after Labor Day.

I hope you'll enjoy it. I am writing this announcement of my final post because I still see Twitter followers coming in and I thought I should write something about the future of this blog.

Truth be told, I have been thinking, writing, deleting, writing something else, not finishing, writing, thinking, rewriting, and thinking some more about this. It's tough to wrap this up as I've enjoyed writing in it for the past two and a half years. So much good has come from this blog including making personal and professional connections as well as my favorite part, writing stories to share with others. The final post will be this blog's last attempt to answer the question, "Can Mom be calm, really calm, not just sedated by medicine, happy via cabernet, but rather, just really truly calm?"

The post will include a story about a huge fight that pretty much ate me alive until the very end. It was so vicious that it even caught they eye of the news media here in New York City. There was a big picture of me and my son in the paper that final day. Someone said to me, "You're always in the newspaper," and I thought, "but it's not on purpose...." I can't wait to share it with everyone. I hope you can come back very soon as I say goodbye. I promise to include a list of favorite blogs to share with you that you may not yet spotted on the blogosphere.

Caption: Somewhere on this path of motherhood, my two boys have grown to be two kids who have sometimes been able to go to playground with each other and not need me at all. The little one still needs my help if he comes without his big brother but when the two of them are together, they are best friends. Here they are trying to do tricks on the Yobaby Kick Flipper which is usually under ten dollars for both the board and the DVD. I love this product. I wish they could practice their tricks at home by watching the DVD but we have neighbors downstairs. I could solve the problem by downloading the video to my iPod and letting them practice there but I never get around to doing that.

Still, I do like the culture of skateboarding for special needs kids. I see the older boys in the park doing stunts and while it looks a little dangerous, it looks exciting as well. I don't see them doing anything else (smoking cigarettes or worse..) The boys I've seen are respectful to the people around them. The culture also seems to be friendly to folks who may not be so chatty and just very into watching and doing. Thus is looks like the practice of being a "fan" of this sport is not as fanatical as some other sports. I can't say this for sure but that is impression I have. I still remember Travis from the movie Clueless who was one of my favorite characters. Yes, he did smoke pot but then gave it up to soar new heights as an athlete. I wish skateboarding could be a school sport like football and wrestling. I don't see how the latter two are less dangerous or less expensive than skateboarding might be.

Moreover, the learning that happens when they get together is best done outdoors and not in front of a screen with video game controls (although I do still like that if it is social, at least for now.) The sport seems to promote mutual support and invite constructive criticism and praise from peers in a non-anxiety provoking way. It also looks like it promotes turn-taking but waiting for turns involves watching your friend do a stunt so it is not so boring to wait. It is also independent like swimming, golf, and track which many professionals say is what are the preferred team sports for special needs kids. Last but not least, it uses my kid's favorite styles of learning: visual and video instruction and trial-and-error. When I ask the older boys in the park how they got so good, they usually tell me that they watched other kids or watched YouTube. Sports education via YouTube. What's next? I've even found someone who gives actual skateboarding lessons. I haven't done it yet but maybe someday....

I like the fashion too... just not all the skulls... nope, not into the skulls....why skulls? How do skulls connect with skateboarding? Is skateboarding connected to pirates somehow? I wonder if has anything to do with rejecting society or maybe just feeling like an outsider. I think my sons will likely struggle with finding their place in society once they reach junior and high school. They will need to be with kids who accept them and help them feel good about themselves. I wonder if they'll fit in with the skateboarder kids in the neighborhood. Oh well.. I don't know everything about this sport but for now, skateboarding culture is okay with me.

Can Emotional Intelligence Be Taught From When-I-Was-A-Kid Stories? 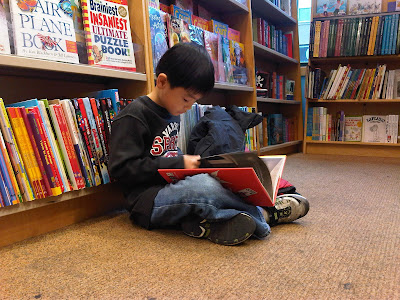 Learning to Accept Gifts Makes Me a Better Mom 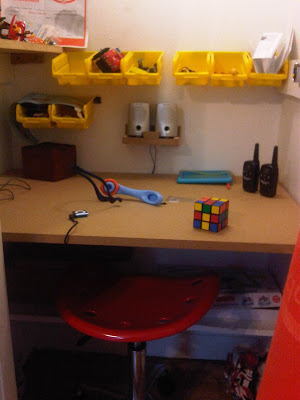 When he was 2 years old, Spencer's therapists used to tell me, Spencer is Spencer and Logan is Logan. I did not listen. Since Spencer exhibited traits of inattention and feeding difficulty, I just assumed that Spencer would come to have an ADHD diagnosis as well. That PDD-NOS diagnosis that he received when he was 2 was taken seriously but at the same time, I always felt that he'd grow out of it with therapy.
But as my kids get older, the acronyms have changed. We are now looking at ASD (Autism Spectrum Disorder) as an acronym for Spencer. Many people don't believe it. I am not even sure I do myself but irregardless, one test does say that and he was very much himself the day he was tested.
For Logan, we are looking at adding more acronyms. Obsessive Difficult Temperament could be one and thus ODT. Anyone ever heard of ODT? And no, it is not ODD (Oppositional Defiant Disorder). I have never heard of it until I met Logan's new doctor in the fall.
And there are more labels. The term "gifted," is another. I always knew he was smart but "gifted" seemed like a stretch to me. I asked Logan's doctor about this last week. Kai was with me. And the doctor said that he thought Logan was gifted but not a genius. There are very few geniuses in the world, he told us. Since the category "genius" was ruled out, "gifted" was a bit more easy to accept and my husband is starting to accept it too.
You would think that we would be embracing the notion of having a gifted child but right now, the "gifted" part of Logan is likely causing him a lot of trouble. It is like ADHD X 3.
Read more »
Posted by Jenn at 2:03 PM 3 comments: